The incoming president of Franciscan University of Steubenville has spent the past few months speaking, and listening, to students, alumni, and friends of the university. 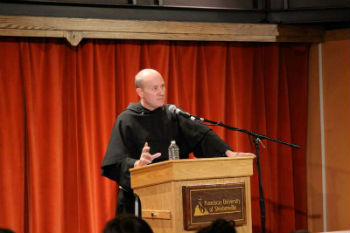 Steubenville, Ohio, (CNA) - The incoming president of Franciscan University of Steubenville has spent the past few months speaking, and listening, to students, alumni, and friends of the university.

He's become well-known for a phrase he uses.

"We don't just want God to bless what we're doing; we want to bless what God is doing," Fr. David Pivonka, TOR, tells students and alumni.

And God, Pivonka told CNA, is doing new things at the Ohio university he now leads.

God "is revealing himself to us and making it clear that he has a plan and a desire for us," the priest said during an Oct. 3 interview, the day before his inauguration as the university's seventh president.

Pivonka said there is "a newness, or freshness that is going on," at the university. And he insists that newness is not about him, but about God's Providence.

"In my own life and in the life of the friars in our community, we are just seeing different pieces come together and different people being placed here, and I think God is doing a really great thing, and a prophetic thing."

He said God is inviting the university to a "refocusing" of its identity, and its priorities. How that unfolds will depend on prayer and discernment.

"It's really keeping our eyes fixed on Jesus, being faithful to what he is asking us to do," Pivonka told CNA.

"I think St. Francis has something to do with that," he added, mentioning that the saint is "helping us continue to understand what makes a Franciscan university different than any other university."

Pivonka, 54, has some ideas about what that might look like. Franciscan identity, he emphasized, is about daily conversion, repentance, discipleship, and about solidarity with the poor.

The priest mentioned especially the importance of the university's relationship with locals in the city of Steubenville, which suffers from high unemployment and economic depression, and the surrounding Ohio valley.

Noting the poverty of the region, Pivonka said that "one of the greatest things to raise people out of poverty is education. Education opens up new worlds, opens up doors. It provides people with options. The poor don't always have options, and that's a horrible feeling to have: that you don't have any options or choices. I think education provides those options."

"We want to make more resources available for the local kids who can't afford to come to the university. We already have a grant of 50% off of tuition for any local kid. There's some people for whom that's enough to get them over the hump. They can come. But there are still others where that's not enough. We want to do a better job at making sure that if an individual who lives in the Ohio Valley and wants an education from Franciscan, that we're able to help them with that."

He also told CNA that he wants his leadership of the university to emphasize unity in the Church and within the university community. And he said unity will require a spiritual vision.

"We just find ourselves in a Church in a time that is really broken," Pivonka said.

"The Church has been really wounded, but she has always been that way. There has never been a time when the Church wasn't like that," he added.

"The university," he said, "could be a source of unity and healing."

He prays that will be the case.

Pivonka told CNA he thinks prayer can also be a source of unity on the university's campus.

While the Charismatic Renewal has long been associated with Franciscan University, Pivonka said that he's mostly concerned that students live as Christian disciples, regardless of their spirituality.

"One of the things I said at the beginning of the year to students and the faculty is ultimately that I'm not concerned with people involved with Renewal as a movement, but what I am concerned about is that our lives be animated by the Holy Spirit," he said.

Acknowledging liturgical "polarization" on the university's campus, and more broadly in the church, the priest explained that "my prayer, and I think it's possible but it will take work by us, is that we can, by the grace of God, really give an example that we don't all have to pray in exactly the same way, and we can approach the Lord differently."

"But part of being Catholic is embracing one another and giving one another freedom to do that without judgement, without dismissal. And that's one of the goals and one of the desires I have for the university."

"The Spirit of God is the same Spirit for all of us," he said.

In the Church "we are supposed to be most united in our prayer and in our worship, and we are actually becoming more divided. I think that is ultimately the work of the Evil One, I really do. So can Franciscan University be a source of renewal, that we can bring this together? That's my prayer."

Pivonka is familiar with renewal at Franciscan University of Steubenville.

The priest graduated from the university in 1989, during the tenure of its well-known and charismatic fourth president, Fr. Michael Scanlan, TOR, who is largely credited with sparking a turnaround in the faith and culture of the university, which was nearly closed when Scanlan took the helm in 1974. Pivonka joined the Franciscans, Third Order Regular, the religious order that oversees the university, and later worked closely with Scanlan in the university's administration.

The university's trustees unanimously elected Pivonka president on May 21.

The priest acknowledged that Scanlan, who died in 2017, has recently faced allegations of improper conduct during his term of leadership at the university.

Scanlan is alleged to have enabled and covered-up sexual misconduct on the part of another popular Franciscan friar on the campus. While Pivonka said he had not seen direct evidence supporting the claims made against Scanlan, he told CNA that he is sorry that anyone might have been harmed by failures on Scanlan's part to respond properly in the face of allegations, and that the allegations and his responsibility to address them have been the subject of his prayer.

Pivonka said that as president of the university, he is committed to transparency in leadership, and to facing the past directly.

He emphasized the efforts made by the university in recent years, especially under the leadership of Fr. Sean Sheridan, his predecessor as president, to address accountability and assure a safe environment at the university.

Pivonka also emphasized the university's commitment to forming students, to "household" faith communities, to academic freedom, and to "dynamic orthodoxy," a phrase long associated with Franciscan, but attributed to the late Cardinal John O'Connor of New York.

"I think that when one experiences the beauty and grandeur and the glory of orthodoxy in right practice and right living, then orthodoxy is life-giving."

"There is a need for an animated orthodoxy, an orthodoxy that's alive, that's fresh, that's engaging. That's really where we see orthodoxy here at the university," Pivonka added.

Pivonka will be inaugurated as the university's president Oct. 4, on the feast of St. Francis. He told CNA that as a leader, he hopes to be an instrument of conversion.

"My prayer is that people will experience conversion. That's continually my prayer in the work that I'm doing at the university," Pivonka said.

As a shepherd, he said he hopes that after they graduate, students of Franciscan University are "engaged in their professions. That they're outstanding doctors and lawyers and engineers and nurses and teachers and catechists and priests. That they are profoundly competent in their field. That they are influencing the people that they work with, to witness to them, to live the goodness of God's love for them."

He added that he hopes the university he leads will exercise a prophetic mission in the world.

God has placed on his heart, he told CNA, that "the Lord wants to do more, to use the university as a prophetic voice to a culture, to a Church, about what is possible. About hope that the situations in which we find ourselves are not the end of the story. About faithfulness."

Ultimately, Pivonka said, he'll measure his success by the holiness of his students.

"I told the students at the opening school year Mass that my goal and my desire is that each one of them hear the Lord say to them, 'Well done, my good and faithful servant. Enter into joy today.' So, big picture success is that each of the students and everyone associated with the university ultimately inherits the Kingdom of God."