Amid calls for his resignation, Bishop Richard J. Malone of Buffalo remains firm in his conviction not to step down from office, even as Cardinal Timothy Dolan of New York assesses whether to open an investigation into Malone's alleged mishandling of abuse cases. 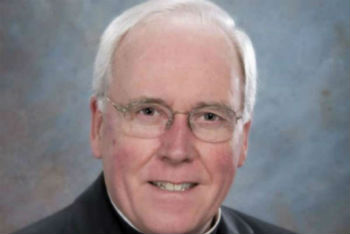 New York City, N.Y., (CNA) - Amid calls for his resignation, Bishop Richard J. Malone of Buffalo remains firm in his conviction not to step down from office, even as Cardinal Timothy Dolan of New York assesses whether to open an investigation into Malone's alleged mishandling of abuse cases.

"Cardinal Dolan has been following the situation in Buffalo very carefully. He is aware of his responsibilities under Vos estis lux mundi, he has been consulting extensively both with individuals in Buffalo, including Bishop Malone, clergy and laity," Joseph Zwilling, communication director for the New York archdiocese, told CNA in a Sept. 10 interview.

"He has been in touch with the nuncio, and with the Holy See. So he has been remaining on top of it, and I expect that we will hear something, some development sometime in the near future," Zwilling continued.

Malone took the reigns in Buffalo in 2012. Though no allegations of abuse have been made against Malone, he has recently faced accusations of mishandling or covering up accusations of clerical sexual abuse by priests in the diocese.

The motu proprio also calls for an investigation into "actions or omissions intended to interfere with or avoid civil investigations or canonical investigations, whether administrative or penal, against a cleric or a religious."

In this case, Cardinal Timothy Dolan of the Archdiocese of New York is Malone's metropolitan archbishop.

"I can't tell you exactly when, or what the development will be, but I would expect there to be some kind of development in the near future."

A Buffalo lay group called the Movement to Restore Trust (MRT), which Malone considered an ally after it formed in 2018, on Sept. 5 joined the call for Malone's resignation.

MRT is calling for the Vatican to appoint a temporary diocesan administrator with no ties to the Diocese of Buffalo while considering the appointment of a permanent bishop.

"Bishop Malone was looking forward to continuing to cooperate with the MRT and regrets that the work will now have to be done without their assistance," the diocese said in a subsequent statement.

Malone has admitted that he has made mistakes in the past, but denies any criminal wrongdoing and says he will not resign.

Of what is Malone accused?

At least two whistleblowers with high-level access in the diocese - Malone's former executive assistant and former priest secretary - have gone public with accusations that Malone mishandled several cases of sexual abuse by priests in the diocese, some of which involved minors.

One such case is that of Father Fabian Maryanski, whom a now 50-year-old woman accused of sexually abusing her beginning when she was 15. She reported the abuse in 1995, but a letter from the victim's attorney seemed to suggest that the woman was in her twenties when the abuse occurred.

The diocesan victim compensation panel found her story believable and offered her compensation, but Bishop Malone said last year that there was still confusion about whether the victim was a minor at the time of the abuse.

As of Jan. 2019, Maryanski's name was not included on the diocesan page of credibly accused clergy, but it has since been added. Maryanski was removed from ministry last year.

In another case, Father Robert Yetter garnered three sexual harassment complaints. Malone and Grosz reprimanded Yetter, and placed him on "voluntary leave," WKBW reported late last year. Because the case did not involve minors, the diocese does not publicly list Yetter's name.

Malone has also faced questions about his handling of the case of Fr. Art Smith, whom Malone's predecessor Bishop Edward Urban Kmiec placed on leave in 2011, after the mother of a boy at St. Mary of the Lake school complained that the priest was sending inappropriate Facebook messages to her son.

Malone reinstated Smith to ministry in 2012, after the accused priest spent time in a Philadelphia treatment center, according to an investigation by local news station WKBW.

"Maybe I could have looked at it in a different way," Malone said last November.

"We had decided with Art Smith - because, again, the Facebook incident did not rise technically to be sexual abuse - to keep him in some limited ministry," Malone told WBEN.

Malone pointed out that he did not again assign Smith to a parish setting. Despite this, the WKBW investigation revealed that while working in nursing home, Smith heard confessions at a diocesan Catholic youth conference attended by hundreds of teenagers in 2013. There were also reports of inappropriate conduct with adults in the nursing home.

"That backfired, too, because even sending him to work in a nursing home...nothing happened with children, but there were some inappropriate actions with adults. So we were dealing with him, but not in a way that I would do now. I admit my failure there," the bishop said.

He also signed off to allow Smith to become a chaplain on a cruise ship in 2015, and the bishop said now he is "kicking [himself] for that."

Smith is currently listed on the diocesan page for clergy with substantiated claims of sexual abuse of a minor.

Malone has since suspended a number of clerics, including in Nov. 2018 a young priest from south of Buffalo for alleged sexual misconduct with an adult woman. Most recently, on Sept. 7, the diocese announced that allegations of abuse of a minor against Father Louis S. Dolinic had been substantiated and the priest would remain on administrative leave while the Vatican made a final determination.

In August 2018, WKBW published an investigative report revealing that Malone's former executive assistant, Siobhan O'Connor, leaked internal diocesan documents to the press which suggested that Malone worked with diocesan lawyers to avoid releasing publicly the names of some diocesan priests accused of misconduct.

Several of the allegations involved boundary violations or sexual misconduct against adults, meaning that the diocese was not required to take action against them in the same way that it would allegations of sexual abuse of minors, under the 2002 Charter for Protection of Children and Young People.

Malone said that while he sought to follow the Charter's requirements, he "may have lost sight of the Charter's spirit, which applies to people of all ages."

O'Connor has been continually calling for Malone's resignation.

"Be truthful with us, Bishop Malone. Put an end to this toxic secrecy and painful silence," she wrote in a Nov. 4, 2018 op-ed in The Buffalo News.

"And, if you love us, begin the process of allowing new episcopal leadership to come to our diocese."

In Sept. 2019, WKBW released recordings of private conversations between Bishop Malone and Fr. Ryszard Biernat, Malone's former priest secretary, which appear to show that Malone believed sexual harassment accusations made against a diocesan priest months before the diocese removed the priest from ministry.

Biernat recorded the conversations as the bishop discussed how to deal with accusations against Fr. Jeffrey Nowak by then-seminarian Matthew Bojanowski, who accused Nowak of grooming him, sexually harassing him, and violating the Seal of the Confessional.

In one conversation from March, Bishop Malone seems to acknowledge the legitimacy of Bojanowski's accusation against Nowak months before the diocese removed Nowak from active ministry.

Despite this assessment, Nowak was not removed from ministry until Aug. 7, one day after the seminarian's mother accused Malone of allowing Fr. Nowak to remain in ministry despite the allegations against him.

Biernat says he made the secret recording after Nowak became jealous of Biernat and Bojanowski's close friendship. According to a conversation taped Aug. 2, the bishop was concerned that media coverage would focus on a possible "love triangle" between Nowak, Bojanowski, and Biernat.

Biernat also says he was a victim of sexual abuse by Father Art Smith. He alleges that Auxiliary Bishop Grosz threatened to halt his ordination as a priest and have him deported to Poland after Biernat complained in 2004 to Buffalo Diocese administrators that he was sexually assaulted by a priest, according to The Buffalo News.

Grosz has since "categorically" denied the claim.

Malone is remaining firm that he will not step down. He reiterated his conviction that he will remain as bishop in a Sept. 6 interview with WBEN Radio.

A lay-led petition calling for his resignation has garnered nearly 10,000 signatures as of press time. A number of clergy have written open letters to local publications calling for Malone's resignation.

"We, the People of God that constitute our diocese, are angry, hurt, and in need of authentic, humble, sincere and holy spiritual leadership. We believe that despite your good work in the past you are no longer able to provide that leadership," the letter reads, as quoted by WKBW.

In mid-August 2019, twenty-two plaintiffs filed a lawsuit against the Diocese of Buffalo, a province of the Society of Jesus, multiple priests, eight parishes, three high schools, a seminary, among others, alleging "a pattern of racketeering activity" that enabled and covered up clerical sexual abuse.

The lawsuit was filed on the first day of a legal "window" allowing for sexual abuse lawsuits to be filed in New York even after their civil statute of limitations had expired.

Among the plaintiffs, who have not been publicly named, are several alleged victims of clerical sexual abuse. The lawsuit alleges specific instances of sexual abuse by priests, and claims that the diocese failed in its duty of care towards children by allowing abusive priests to have contact with minors through parishes and schools.

Calling the diocese and affiliated organizations an "association in fact" for the purposes of federal racketeering laws, the suit alleges "common purpose" in "harassing, threatening, extorting, and misleading victims of sexual abuse committed by priests" and of "misleading priests' victims and the media" to prevent reporting or disclosure of sexual misconduct.