Democratic presidential candidate Rep. Tulsi Gabbard (D-Hawaii) has publicly opposed third trimester abortions, in a break with the rest of the Democratic field who all appear to support abortion access until birth. 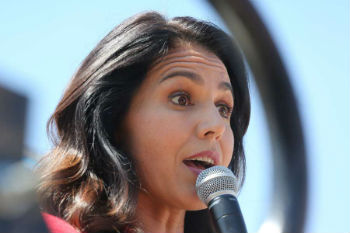 Washington D.C., (CNA) - Democratic presidential candidate Rep. Tulsi Gabbard (D-Hawaii) has publicly opposed third trimester abortions, in a break with the rest of the Democratic field who all appear to support abortion access until birth.

In the Sept. 8 interview, Gabbard acknowledged that she used to be pro-life but now supports "a more libertarian position on this issue that government really shouldn't be in that place of dictating to a woman the choice that she should make."

When asked by interviewer Dave Rubin what the "cutoff" point for her was in protecting a woman's "right to choose" abortion, Gabbard answered, "I think the third trimester, unless the woman's life or severe health consequences is at risk."

Gabbard's statement appears to signal a break with her own legislative record. In the House of Representatives, she voted against a 20-week abortion ban in 2017. The Pain-Capable Unborn Child Protection Act, H.R. 36, would have criminalized abortions when the "probable post-fertilization age" of the baby is 20 weeks or older, except in cases of rape and incest, or when the life of the mother is at stake.

Gabbard has also not signed a discharge petition to force a vote on legislation protecting babies who survive abortions. The petition currently has the support of 201 members of Congress calling for a vote on the "Born-Alive Abortion Survivors Protection Act," H.R. 962, which would require that babies surviving abortion attempts receive the same appropriate and necessary health care from the attending doctor as any other baby would receive. A vote on the bill is currently being blocked by Democratic House leadership; 218 signatures are required to force the vote.

Gabbard's statement of opposition to third trimester abortions stands in contrast to recent comments by other Democratic presidential candidates that suggest that women should have legal access to abortion until birth.

Rep. Beto O'Rourke (D-Texas), when asked by an audience member at a campaign stop if he would support a woman's access to an abortion one day before birthing her child, answered that the decision should be left up to the woman and that government should not interfere.

Peter Buttigieg has argued that women should be the ones deciding what the limits are for abortions within pregnancies, and said in a Sept. 6 interview that "there's a lot of parts of the Bible that talk about how life begins with breath," but added that "no matter what you think about the cosmic question of how life begins," "the woman making the decision" should be the one making that determination for her unborn child.

Other leading Democratic candidates have recently promoted abortion, including overseas.

Bernie Sanders said during a CNN "Climate Crisis Town Hall" on Sept. 4 that women "have a right to control their own bodies and make reproductive decisions," and said that the Mexico City Policy was "totally absurd."

The Mexico City Policy has been implemented by the administrations of Presidents Reagan, George H. W. Bush, George W. Bush, and Trump, and bars foreign non-governmental organizations that promote or perform abortions from receiving federal funding.

Sanders added that "I very, very strongly support" access to birth control "especially" in poor or developing countries "where women do not necessarily want to have large numbers of babies."

Sen. Elizabeth Warren (D-Mass.) has a campaign platform that calls for enacting federal statutory rights that parallel the Supreme Court's Roe v. Wade decision that legalized abortion in all 50 states.

It also calls for the passage of federal laws to stop state laws that could eliminate abortion access through legal regulations that drive out abortion providers - "referred to by abortion supporters as "Targeted Regulations on Abortion Providers (TRAP) laws."

In the Tuesday interview, Gabbard was asked about national polarization in the abortion debate and said that no one on either side should demonize the other.

"I disagree with Hillary Clinton on a ton of things, but when she came out and she said abortion should be safe, legal, and rare, that's something that I agree with," Gabbard said.

She added that the government should not be interfering in abortion - "either to prohibit abortions or to mandate that women have abortions.

"A woman is the one who's got to live with whatever decision that she makes," Gabbard said. "And that's where I draw the line and say that the government should not be in the position of telling that woman what choice she must make." on Saturday to protest against the impending legalization of abortion in Northern Ireland. Pro-life advocates told CNA that they fear the proposed changes in the province could be used to legalize abortion on demand throughout the entirety of the United Kingdom.

During debate in the House of Commons, MPs from other parts of the UK voted to add provisions legalizing abortion in Northern Ireland, despite a 2016 decision by the Assembly to reject bringing abortion to the province.

The law, which will take effect on Oct. 21 unless the Assembly is able to resume operations, will also introduce same-sex marriage in Northern Ireland by 2020.

The March for their Lives was organized by the group Precious Life. They told CNA they were "heartened and encouraged" by the strong turnout, which was estimated to be over 20,000.

The people of Northern Ireland made " a strong stand against the extreme and undemocratic legislation that Westminster is forcing on Northern Ireland," said Bernadette Smyth, founder of Precious Life told CNA.

"We believe Northern Ireland is being used as a Trojan horse to push for full 'decriminalisation' of abortion across the UK, a euphemism for the full legalisation of abortion through the whole nine months of pregnancy," said Smyth.

Abortion is currently legal in Great Britain through the 24th week of a pregancy for any reason. After that time, there must be a medical reason for a woman to abort her pregnancy. The Abortion Act of 1967 introduced the practice in England, Scotland, and Wales, but its terms did not extend to Northern Ireland, where it remains illegal, with very limited exceptions. A person who is found to be guilty of performing an abortion faces up to life in prison.

Liam Gibson, the Society for the Protection of Unborn Children's (SPUC) Northern Ireland political officer, told CNA that he was not surprised people marched in protest at the thought of legal abortion unwittingly coming to Northern Ireland.

"It is no wonder so many thousands of ordinary people voted with their feet at the weekend. They have been outraged at the way their deeply held views have been ignored and the existing laws threatened by a Parliament hundreds of miles away," said Gibson.

John Deighan, deputy CEO of the SPUC, told CNA that Parliament had shown a disregard for the voters and the province's right to self-governance.

"Westminster passed the Northern Ireland (Executive Formation) Act without consulting the Northern Irish people and with no respect for devolution," Deighan said.

Devolution refers to the program of legislative reforms passed in 1999 which introduced levels of legislative autonomy for the different countries of the United Kingdom and created the Scottish Parliament and national Assemblies for Wales and Northern Ireland.

"It is a testimony to the pro-life tradition of the province that so many have taken to the streets. UK politicians have perpetrated a disgraceful injustice on the people of Northern Ireland and on the defenseless children in the womb," said Deighan. He said he hopes the new laws would spur the assembly into action.

"We can only hope that the voices of so many united for life can bring politicians to their senses. Stormont needs to be reconvened as soon as possible and ensure that the shocking laws imposed from Westminster are consigned to the political dustbin."