'If we are spiritually sterile, we will have no future,' bishop tells Ruthenian eparchy

In many ways the Ruthenian Eparchy of Parma, a local Church of the Byzantine rite in the midwestern United States, faces the same problems as the Church throughout the world: shrinking and aging parishes, fallout from scandals, financial strain. 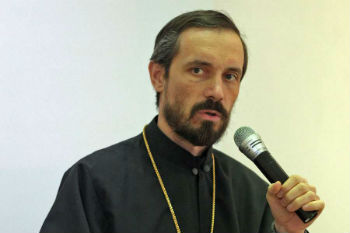 Parma, Ohio, (CNA) - In many ways the Ruthenian Eparchy of Parma, a local Church of the Byzantine rite in the midwestern United States, faces the same problems as the Church throughout the world: shrinking and aging parishes, fallout from scandals, financial strain.

But they feel them perhaps all the more deeply, as a community of 2,000 faithful attending liturgies at 29 parishes spread out over 12 states.

In a pastoral letter to the faithful marking the beginning of the Byzantine ecclesial year, Bishop Milan Lach, SJ, does not shy away from these problems, though he maintains optimism that the future of his eparchy is bright.

"(H)ow do we want to move forward? Growing and advancing is not about starting from scratch, but about taking our cues from who we are and what we have at our disposal, and having the courage to see the future with hope," Lach said in his Sept. 1 letter to the Parma eparchy.

Bishop Lach said, "The most precious treasure that we have in our Ruthenian Catholic Eparchy of Parma is you, our faithful, from our youngest children to our eldest believers. For you, we toil in the vineyard of the Lord by proclaiming the crucified and resurrected Christ."

"You are that pearl of great price, for which we are investing in our future by the building up of the Kingdom of God, irrespective of the fatigue, energy or finances that it may entail, because every human life is a gift of God. Other material things or finances, even if they are important in life, are secondary to me."

While Lach treasures the faithful of his eparchy, they are increasingly scarce in number. Of the 2,000 Ruthenians who regulargly attend Sunday liturgies in the eparchy that stretches from Ohio to Nebraska, 300 are children under the age of 12. Numbers of adult parishioners have declined in recent years due to the aging or illness of parishioners, or those who move south to retire, or those who have left the Church because of recent sexual scandals, Lach noted.

This decrease in the number of faithful will likely lead to difficult decisions about the merging or closures of some parishes throughout the eparchy, Lach said.

While the southwest area of the eparchy has seen some growth and may need additional priests or parishes in the future, "the unsustainability of some parishes in other parts of the eparchy, which are not able to maintain themselves and their priest, will lead me to make the difficult decision for merger or closure."

"I have always been and remain open to dialogue. However, at the same time, I am forced to act in order to stop the severe financial bleeding we are experiencing," Lach said. "In this type of situation, it is not wise to attempt to save a building for the sake of the building; we need to stabilize ourselves as a community first."

In light of these issues, Lach implored his eparchy to increase their outreach efforts.

"We must not lock ourselves in our own world, with our own problems. That won't help us. I strongly encourage you to reach out. We cannot do without outreach ... Let us not be afraid to be open to the diversity of the faithful and of cultures, for only this is the way to a flourishing future."

Additionally, Lach noted that successful and fruitful outreach is not possible if it is not born out of a deep faith, fostered through prayer and the Word of God.

"God's Word must become for everyone in our eparchy a daily meal, as something without which we cannot live," he said.

"If we depart from the Logos, the Word of God, we will run the risk of our churches becoming social clubs where people enjoy being together, but do not need anyone else in their company. The Church is not a club; the Church is a community of baptized brothers and sisters."

He also encouraged the people of his eparchy to frequent the sacraments, including monthly confession, and to pray, fast, and help the poor and needy.

"Let us not neglect our traditional liturgical prayers in our churches, whether it be vespers, morning prayers, canonical hours, or molebens and akathists. I encourage my brother priests and deacons to be an example for the faithful with their liturgical prayers and in their personal life. May God's temple be a place of prayer where sacred silence is kept and appreciated. This is a matter close to my heart," he said.

There are currently 23 active priests in the eparchy. In the next eight years, Lach estimates that the region will need 17 additional new priests. That is why he wants to focus the resources of the eparchy on fostering vocations and supporting priests and deacons, rather than on propping up parish buildings for the sake of an attachment to the building, he said.

"(I) want to invest funds in high-quality priestly preparation and formation of young men from the United States, who want to serve Christ in our eparchy, as well as in priests from Europe who will come to help us," he said.

These funds will also go toward the support of currently active priests, as well as for those in retirement or those who will retire soon.

At the end of his letter, Lach described the financial situation of the eparchy, and noted that the chancery of the eparchy will no longer be able to offset the debts of parishes and "pay the required amount to the priests' pension fund or health insurance plan."

At one time the eparchy had enough funds to provide this, Lach said, but those funds have run out, and indebted parishes will be expected to gradually repay their debts to the chancery "in the near future," he noted.

"I am firmly convinced that our Byzantine Catholic Church in the United States has a future, because it offers the Gospel, the joyful message of the living Jesus Christ, through a millennia-old authentic experience. We must let others know about it," he said.

"While I am willing to lead and to serve, all of us need to embrace our future together," he added.

"I hope that you will share my optimism that our future is bright, but we must together embark on the right path. Please pray for me that I may receive the gifts of the Holy Spirit, especially the gift of discernment. I pray for you constantly that, by being united in Christ, in the end we will all meet in His heavenly home."