At Mass on the island nation of Mauritius Monday, Pope Francis urged Catholics to avoid worldly securities, to increase their zeal for evangelization, and to invite the young to be an active part of the Church. 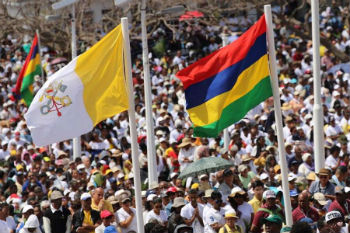 Port Louis, Mauritius, (CNA) - At Mass on the island nation of Mauritius Monday, Pope Francis urged Catholics to avoid worldly securities, to increase their zeal for evangelization, and to invite the young to be an active part of the Church.

"Through his missionary outreach and his love, Father Laval gave to the Mauritian Church a new youth, a new life, that today we are asked to carry forward," the pope said outside the Monument of Mary Queen of Peace in Port Louis Sept. 9.

"We need to foster this missionary momentum," he added, "because it can happen that, as the Church of Christ, we can yield to the temptation to lose our enthusiasm for evangelization by taking refuge in worldly securities that slowly but surely not only affect the mission but actually hamper it and prevent it from drawing people together."

Bl. Jacques-Desire Laval was a French missionary priest and member of the Spiritans order. He is known as the "Apostle of Mauritius" because of his great evangelization work on the island, in particular his attention to the poor, the sick, and ex-slaves.

Arriving on the small island a few years after the abolition of slavery in Mauritius, Fr. Laval learned the local language and preached the Gospel to the freed men and women.

Fr. Laval was beatified by St. John Paul II on April 29, 1979, during a visit to the country. His feast day is celebrated Sept. 9.

In his homily, Pope Francis said Fr. Laval has a message for young people, or anyone, who feels "voiceless, simply living from day to day."

He tells them, the pope said, to "take up Isaiah's proclamation: 'Break forth together into singing, you ruins of Jerusalem; for the Lord has comforted his people, he has redeemed Jerusalem!'"

Mauritius is a small island nation in the Indian Ocean, off the coast of Eastern Africa. Pope Francis visited the country's capital city, Port Louis, as part of a six-day trip to three sub-Saharan African countries.

He was in Mozambique Sept. 5-6 and Madagascar Sept. 7-8. Mauritius is his last stop before returning to Rome Sept. 10.

"Missionary momentum," he preached, "always has a young and invigorating face. For it is the young who, by their vitality and generosity, can give it the beauty and freshness of youth, when they challenge the Christian community to renewal and urge us to strike out in new directions."

It is not always easy to make room for young people in society, but it is necessary, he added, noting that despite Mauritius' economic growth in the last few decades, many young people are still suffering from unemployment, which makes them uncertain about the future.

"Our young people are our foremost mission!" he emphasized. "We must invite them to find their happiness in Jesus; not by speaking to them in an aloof or distant way, but by learning how to make room for them, 'learning their language,' listening to their stories, spending time with them and making them feel that they too are blessed by God."

"Let us not deprive ourselves of the young face of the Church and of society. Let us not allow those who deal in death to rob the first fruits of this land!" he urged.

Pope Francis compared the Marian shrine, which sits in the foothills of a mountain, to the Mount of the Beatitudes.

"The Beatitudes," he explained, "are like a Christian's identity card. So if anyone asks: 'What must one do to be a good Christian?' the answer is clear. We have to do, each in our own way, what Jesus told us in the Sermon on the Mount."

"We must also discover anew Christ's call to be 'blessed.' Only joyful Christians awaken in others the desire to follow this path," he said, adding that "the word 'blessed' means 'happy.' It becomes a synonym for 'holy,' for it expresses the fact that those faithful to God and his word, by their self-giving, gain true happiness."

"When we hear the threatening prognosis that 'our numbers are decreasing,' we should be concerned not so much with the decline of this or that mode of consecration in the Church, but with the lack of men and women who wish to experience happiness on the paths of holiness," Francis said.

He added: "We should be concerned with the lack of men and women who let their hearts burn with the most beautiful and liberating of all messages."

Even Fr. Laval, Francis explained, experienced difficulty and disappointment in the Christian community, but in the end, "the Lord triumphed in his heart. For he had put his trust in the Lord's power."
"Let us pray that that same power may touch the hearts of many men and women of this land, and our hearts as well, so that its newness may always be capable of renewing our lives and our communities."

Pointing to the statue of the Virgin Mary at the shrine, Pope Francis said she "protects and accompanies us, reminds us that she herself was called 'blessed.'"

"Let us ask her for the gift of openness to the Holy Spirit," he concluded. "May she obtain for us that persevering joy that never falters or fades. The joy that constantly leads us to experience and proclaim that 'the Most High has done great things, and holy is his name.'"