What is the state's role in promoting virtue?

The debate over competing culturally conservative visions for the future of the U.S. continued Thursday night at the Catholic University of America, as Sohrab Ahmari and David French offered their prescriptions for moral decline in society. 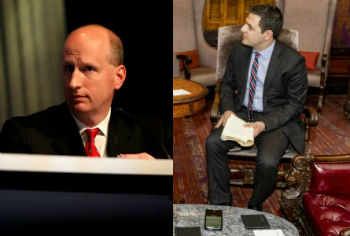 Washington D.C., (CNA) - The debate over competing culturally conservative visions for the future of the U.S. continued Thursday night at the Catholic University of America, as Sohrab Ahmari and David French offered their prescriptions for moral decline in society.
Historic Christianity was never private, but has been "a collective experience," said Ahmari, op-ed editor of the New York Post and a Catholic. He added that Christians "have to restore" the societal structures supporting the practice of virtue through the powers of the state and stop the public expression of certain problematic viewpoints.
David French, senior writer for National Review and a Protestant, said, "We live in a nation of enduring ethnic, religious, cultural differences," and Christians need to accept that there will be hostile views in the public square with which they will need to co-exist under First Amendment rights to freedom of speech and religion.
"There is no circumstance under which any political movement in this country can create a superstructure where the people that you like always, win and the people you don't like and you think that are bad are always going to lose, and you're going to always like that outcome," French said.
"And if you try to do that, you'll rip this place to pieces. The only way this place survives as a united country is if we apply 18th century solutions to this 21st century division, rediscover the First Amendment of the United States, rediscover religious freedom."

The debate between Ahmari and French on "Cultural Conservatives: Two Visions" was hosted Sept. 5 by the Institute for Human Ecology at the Catholic University of America.
While the conversation began cordially enough, tension immediately rose as the two launched into their positionsâ€"and their analysis of the other's positionâ€"in the continuation of an online debate this past spring.

The debate hinged upon what means Christians can and should use to promote public virtue and discourage vice in the U.S. Ahmari emphasized that Christians need to use the force of the state to fight back against threats to public virtue, including through laws that might silence public views deemed a threat to virtue.

Ahmari's first anecdote was his recent discovery that a local library was hosting a "drag queen story hour" for children. He said this use of the public space threatened to scandalize children and that local Christians should take control and put a stop to it.
"It is a threat, and it is demonic," he said, reading a description of a similar event that was held in the UK where children at a library were taught how to twerk. "To me, that should raise a five-alarm cultural fire," he said.
French said that in such a large, pluralistic country there will be moral failings and differences of opinion on morality. Christian efforts to use the state to silence views they don't like simply won't work in a society with so many different views and beliefs, he said.
A problem "infinitely worse" than "drag queen story hour" is the phenomenon of "tens of millions of Christian men addicted to porn," French said.
When pressed by French on what actions he might take against drag queen story hour, Ahmari responded that the head of the "Modern Library Association" could be subpoenaed by Congress and face tough questions, or a local ordinance could be passed curtailing drag queen story hour.
Such a local action would be subject to review by the courts, French said. The constitution has carved out a space for Christians to proclaim Christ without being silenced by the government - and a space is all they need to operate, he said.
Ahmari countered that the public square has become so corrupt that it is quite difficult for families and children to remain virtuous, and the government has a role in protecting children from pornography and other problems. While society was formerly majority-Christian with a more common definition of what was acceptable or unacceptable in public, he said, now that common definition has eroded and Christians need to be assertive to bring it back.
Christianity can't just be for an "elite elect," Ahmari said, noting that his son statistically would be likely to encounter pornography before the age of 12; children should not be exposed to pornography and be expected to live a heroic moral life on their own, he said.
French argued that Christians should desire the salvation of all but should not skirt the constitution - or walk right up to the line of violating it - to discriminate against viewpoints they believe are evil. If they do, they should expect their opponents to use the force of law to silence them, he warned.
"You cannot take these things on a case-by-case basis and say 'free speech for me and not for thee,'" French said, because "if you have wrecked legal institutions," then "there's a price that's paid there."
That exchange revealed one fundamental difference between the positions - French said that any Christian attempt to silence views they don't like would violate "viewpoint-neutrality," the practice of the government not discriminating against any one belief. The First Amendment is clear that such actions would be unconstitutional, he said.
Ahmari said later in the debate that "public decency" laws might have protected against problems like drag queen story hour - while French said such an event wouldn't even have violated obscenity laws from the 1800s.
The two also differed on the direction of societal moral decay. Ahmari argued that it has reached a crisis level where government action needs to be taken to protect virtue; French acknowledged that there are serious evils in today's culture, but maintained that they will always be present in some form.
There have been positive signs in recent years, he noted, notably the continuous decline in the number of abortions for decades and "the advances that we have made" in respect for free speech and religious freedom by the courts.
"These battles are not won and lost in any one presidential cycle," he said, in reference to support for President Donald Trump to use his administration to push pro-life policies. French argued against what he saw as using non-Christian means - supporting a flawed candidate like Trump - of promoting Christian beliefs in policy.
Ahmari said that Trump, while imperfect, is the most pro-life president in history; French, who has long opposed Trump, said that other presidents have supported pro-life policies and that Christians risk losing their credibility by attaching themselves to such a controversial figure.
The two agreed that Christians need to witness to their faith in the public square, but the debate revealed fundamental differences in their visions. The chief tension was whether Christians should violate, or come close to violating, the First Amendment to stop immoral public events and plagues such as pornography or library story hours.
Another underlying difference between the two was the role of the state in promoting virtue - as French said that Christians have a "space" to do so without resorting to using the levers of power to accomplish it, while Ahmari argued that the state has a proper authority to support a virtuous public square and Christians should use it assertively.