Solidarity is strong in the Church in Madagascar, priest says

Later this week, Pope Francis visit the island nation of Madagascar, a place where the faith is practiced with simplicity and with a strong solidarity, according to one priest on the island nation. 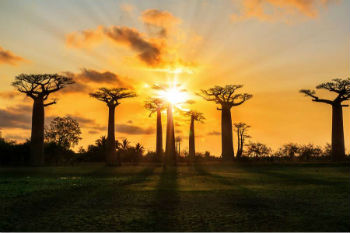 "The best things about the life here in Madagascar, what comes to mind, is the social life, where you find even a beautiful friendship and solidarity among the people," a diocesan priest from Madagascar, Fr. Rodolphe Randriamahefa, told CNA via email.

He said, for example, that on the streets of Madagascar, everyone always greets one another, even if they are strangers.

"It is a very simple life," he said, noting that families and friends support each other.

"This solidarity also plays a great role in ecclesial life," he said. "The Church, on this point, gives its contribution in the education of families, parents, and children."

Something the world could learn from the people of Madagascar is "not to complicate life too much," Randriamahefa said, adding that they "have a simpler life; it is a people smiling, welcoming, and happy in small things."

The priest added that "as for the Catholic Church, the faithful have so much motivation to increase their faith. There are many boys and girls who also respond to God's call to become priests, religious men and women."

"Catholics, in particular, practice charitable works in society to better live the gospel and true love according to Jesus Christ," he said.

Pope Francis will visit Antananarivo, the capital city of Madagascar, Sept. 7 and 8.

A priest for the Diocese of Ambatondrazaka, Randriamahefa said the pope's visit will be an "unforgettable and important event for the Malagasy people."

He explained that for a developing nation especially, the visit of a pope can help contribute to "a more stable ecclesial, social, and political life."

"Madagascar it is still a progressing country, therefore not everyone... [knows] where it is in the world," he said. He explained that it is the fourth largest island in the world, located about 250 miles off the coast of eastern Africa.

Because various people arrived there by ship many years ago, the people are of many different ancestries, including different African and Asian cultures.

As in many countries, rice is a major dietary staple, Randriamahefa said, but Madagascar also has its unique features, such as baobab trees and lemurs, the latter of which he described as "cute animals and sweet with people."

Madagascar has a population of over 23.5 million, with over 8.2 million Catholics. Other religious beliefs in the country include Islam, Orthodox Christianity, Protestantism, Mormonism, and the pagan Malagasy religions.

Randriamahefa said the Catholic Church plays "a great role in [Madagascar] society" through its schools and hospitals, which lower costs, or provide services for free, to those who cannot pay.

"On the other side, the Church seeks to have communion despite the diversity of religions to make the faith grow in Madagascar," he said.

In a video message sent before his visit, Pope Francis thanked the Malagasy people for their prayers, saying that "prayer knows no boundaries," and even if he can only visit a few places in the country, with prayer he will reach everyone.

He also praised God for Madagascar's natural beauty, for which it is famous, and said this beauty must be cared for.

He added that the holiness of the people is a beauty even more important to Christ. "For this reason, I will come to confirm you in faith and at the same time to draw from it," Francis said.

In addition to saying Mass and meetings with authorities, Pope Francis will visit a place in Madagascar called "the City of Friendship - Akamasoa."

This "village" is one of several run by the Vincentian order in Africa and founded by the missionary Fr. Pedro Opeka. Together they house 25,000 people in need of assistance. Each village has schools, a medical dispensary, and places of work for adults.

The Sunday Mass at the Akamasoa village, where Pope Francis will visit, is regularly attended by 8,000 people.

Another notable moment of Francis' journey will be a stop to pray at the tomb of a 19th-century laywoman and convert from paganism, Bl. Victoire Rasoamanarivo.

Bl. Victoire, who came from a noble family of pagan animist beliefs, converted and was baptized Catholic at age 15. She later helped to preserve and defend the faith in Madagascar at a time when Christians in the country were persecuted.

She herself was subjected to persecution by her own family after her conversion. Despite feeling a desire to join religious life, she prayed and accepted the advice of an order, who thought if she joined, her family would make things in the country much worse for Catholics.

In obedience, she married the man her family arranged. He later turned out to be a cruel and abusive man. Bl. Victoire prayed and sacrificed for him, and at the end of his life, he repented and was baptized.

From 1883 to 1886, during the first Franco-Malagasy War, foreign missionaries were expelled from the country and Catholic persecution increased. The missionaries entrusted the Church in Madagascar to Bl. Victoire, who traveled around the island catechizing and encouraging the Catholic communities there. She died in 1894, at the age of 46, after devoting her last years of life to prayer and to serving the sick and poor.

She was beatified April 30, 1989, in Antananarivo by Pope John Paul II, during his four-day trip to the country.