Is Atheism a religion?

Is atheism a religion? This is a question that many Christians ask when confronted with the various beliefs of atheists. It is also a hot topic of debate. Here is one perspective. 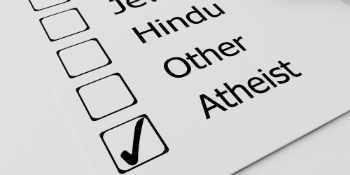 Is atheism a religion?

LOS ANGELES, CA (California Network) -- Atheists are accused of having a religion, of having belief, faith, possessing dogma, and even proselytizing as Christians do.

According to many Christians, the atheist faith is as follows:

The atheist rejects belief in God; they instead adopt a faith-filled confidence in science and materialism. Materialism is the notion that the only thing which exists is the material world. The supernatural does not exist, and cannot be demonstrated to exist by science precisely because it is supernatural; what units would one use to measure a god? Atheists accept as a matter of dogma, that the universe came from nothing, and that the Big Bang Theory, and evolution are facts.

How accurate is this assessment? Unfortunately, not very. And it's the inaccuracy of most Christians that gives atheists ammunition to resist Christian apologetics. After all, if your opponent does not reveal an understanding or appreciation for you or your beliefs, how likely are you to respect their arguments against you?

First, let's deal with whether atheism is a religion or not.

A religion has a set of beliefs, dogma, rites and rituals, and often a hierarchy responsible for shepherding believers and maintaining the faith. Atheism does not have these features.

Atheism, in its most basic form, is merely the rejection of the belief that gods exist.

Christians who claim God exists also have the burden of proof. It isn't difficult to prove the existence of God per se, at least using logic, and evidence that Christians accept, but atheists are often steadfast in their demand for scientific evidence. The problem is that the supernatural is impossible to quantify. As a result, atheists have insulated themselves from Christian apologists because no matter what evidence a Christian may offer, it can always be dismissed as "unscientific." An analogy might be a blind person arguing that colors do not exist because they cannot see them and you cannot describe them. How do you describe color to a person who has never seen color?

What about all those other beliefs, such as the universe from nothing, the Big Bang, and evolution? It is generally true that atheists accept these beliefs, but there is no rule requiring it. And there are rare atheists who reject them.  Some atheists also claim to believe in other supernatural phenomena such as ghosts. Just because a person does not believe in God does not mean they must believe anything else. Christian apologists should avoid making such a leap in logic.

To convert an atheist is a process and it requires less debate and a lot more love. From the debate perspective, it is logical to conclude God exists because the universe has a cause. That cause is certain to be more powerful than the universe because we have never observed an inferior thing give rise to something superior; to wit, energy does not give rise to a surplus of matter or matter to a surplus of energy. The two trade equally, hence the equation, E=MC2.

Whatever the cause of the universe, it must be greater than the universe we inhabit. We can call that creative force God, the same as we can call it by any other name. By application of Occam's razor, we can assume the creative force is a singular thing. That thing, or God, has clearly arranged the universe in a manner that is conducive to life on Earth. God has given humanity a purpose and instructions, although those instructions are often misunderstood. God has sent prophets and a teacher to us to help us understand those instructions. God has also left us with the Holy Spirit and the Church to guide us. And when we open ourselves to the idea that there is evidence that does not fit into a test tube, then we can finally encounter God on His terms, as it must always be.

The logic above is debatable. There are no clincher arguments that work. If such arguments existed, we would live in a world with no Christians or with no atheists. Millions of people have already covered this debate, and despite a few high-profile conversions on each side, the world continues much as it has since creation. Some people are simply going to believe and others not.

The trick for Christians is to get atheists to open up to the possibility that there is more out there than what can be revealed by a microscope or a telescope. It's like convincing an indigenous native who only knows about drums that radio waves exist and carry music. You must be the radio.

You can accomplish this by avoiding adversarial debate. In a debate, people often strive for their own side, not the truth. Instead, both people should be seeking truth, not victory. As a Christian, you know the truth, there is more out there than mere matter and energy. But unless your rapport with the atheist is warm, it will be difficult for you to convey that message.

Kindness, even in the face of ridicule, is essential. Love and support, even for people who may not deserve it, is always the way to be. The early Christians were persecuted terribly, yet their faith conquered the Roman Empire. They did not win this victory by arguing in the forums. They won by evangelizing, showing kindness at every turn, and sharing the Gospel when the listener was ready.

In conclusion, atheism is not a religion, but it is a belief. The person who makes the claim bears the burden of proof. But the way to win against the atheist is not to debate so much as to love. The way to do this is threefold, perform good works, perform good works, and perform good works. By your actions, the atheist will judge you. People are always attracted to love and kindness. They are repulsed by conflict. You cannot draw a person close by being adversarial. Be the radio that channels God's love for all people, including the atheist, and perhaps they too will hear the sweet music of God's welcoming grace.