Have Catholic priests made a pact with the devil for the death of Pope Francis? Vatican launches investigation into occult allegations

The Vatican is investigating a secretive cult within the Church that may have made a pact with Satan for the death of Pope Francis. 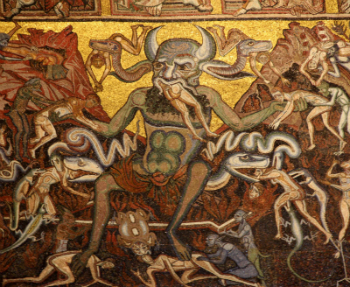 Lucifer and the Sinners, as inspired by Dante's Inferno.

LOS ANGELES, CA (California Network) -- The Daily Beast reports the Vatican is investigating the Heralds of the Gospel, which some say participates in cult practices and has made a pact with Satan. The investigation is being led by the Vatican Congregation for Institutes of Consecrated Life.

The organization was founded in 1995 following the death of Plinio Correa de Oliveria (Dr. Plinio), founder of the Tradition, Family and Property Association. Dr. Plinio was an intellectual, ultra-conservative Catholic who went so far as to protest the opening of the Second Vatican Council.

The organization he founded split into two groups. One group remains faithful to the original mission of the organization, but the second group, known as the Heralds of the Gospel, seems ot have taken a more dramatic path.

Founded by Monsignor Joao Scognamiglio Cla Dias, the Heralds believe that Dr. Plinio is in contact with Satan. They offer exorcisms to people, but instead of performing an exorcism, they use the occasion to talk to the devil.

It is these shocking allegations that are the focus of Vatican inquiry.

The investigation has prompted Dias to step down as leader of the Heralds, which he did on June 12. He will remain with the organization as a consultant.

The Vatican has some evidence against the Heralds. Video shows their members performing exorcisms, but not using the standard practice approved by the Church. The videos appear to show conversations between the exorcist and the devil.

No conversation with the devil can be beneficial, since Satan is a deceiver.

At least some members of the Heralds appear to believe that Dr. Plinio is the one who is driving global warming, and that a meteor will destroy North America. They also believe that the devil controls Pope Francis. There are rumors of a pact. They even predict the death of Pope Francis at the Vatican. According to a transcript of one such conversation, the devil says, "The pope will die falling."

Such allegations may come as a shock even to members of the organization, which surely cannot be all bad or involved. In fact, there must be a great number of very good, strong Catholics within the organization who are shocked to hear these claims. The Heralds have chapters around the world and admit many pious men and women into their ranks.

However, the Vatican is certain to crack down on the group if it is associated with claims such as these. It is unclear how far the Vatican will go, but it could ban the organization and all participation in its activities.

If the Vatican bans the organization, anyone who continues to participate in its activities could face severe penalties. Any clergy could be dismissed.

More seriously, people who deal with the devil are likely to get burned. No good comes of such practice, nobody profits from working with a deceiver. In our hearts, we know such practice is forbidden and dangerous. Anyone involved in the occult should repent and return to the Church in penance, before they too are possessed by the lies of Satan and his wicked ways.

We pray for truth the truth to come out, for those who have done evil to repent, and for God's mercy and justice. We reject the devil and all his works!