Although the North Korean government is doing everything it can to suppress Christianity, the faith continues to spread, said a defector and missionary who called for prayers and action to increase religious freedom in the country. 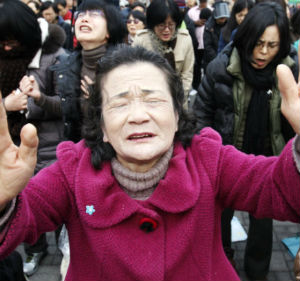 North Korea is the "worst place on earth for Christians," according to Open Doors UK.

Washington D.C. (CNA/EWTN News) - "It is my prayer that all the international Christian communities will pray for those North Korean Christians to really help and engage them to spread the Gospel, not only through the works of the underground Church network, but also through the government and request for this religious freedom that they are earnestly praying for," Kim Chung-seong, a North Korean defector, told reporters through a translator on Friday.

Kim is a Christian missionary, and spoke at the first annual World Summit in Defense of Persecuted Christians in Washington, D.C. The summit was held on May 11-12 and featured Christian religious leaders from Protestant denominations, Orthodox churches, and the Roman Catholic Church. Persecuted Christians themselves were also present to give their testimonies.

Overall, Christians from around 130 countries and territories were represented at the summit, as well as representatives of Christian advocacy groups like Open Doors USA and Voice of the Martyrs. The summit was hosted by the Billy Graham Evangelistic Association.

Vice President Mike Pence delivered the keynote address on Thursday, and pledged that "protecting and promoting religious freedom is a foreign policy priority of the Trump administration." He promised his prayers and support for persecuted Christians everywhere, as well as support for members of other faiths persecuted for their beliefs. Cardinal Donald Wuerl of Washington, D.C. gave a keynote address on Friday.

Kim, who also spoke at the summit, is now part of a daily Christian radio program in South Korea, broadcasting Christian material into parts of North Korea. Kim came to South Korea in 2004, according to Reuters.

Along with his radio program, part of the Far East Broadcasting Company, he also helps send Gospel messages, Christian music, and world news smuggled into North Korea through USB drives and SD memory cards, he said.

The Communist dictatorship of North Korea is regarded as among the worst human rights violators in the world. "Freedom of religion or belief does not exist and is, in fact, profoundly suppressed," the U.S. Commission on International Religious Freedom stated in its 2017 annual report.

The group Open Doors UK in a recent report said North Korea is the "worst place on earth for Christians" because the totalitarian state does not tolerate dissenters, forcing everyone to worship the country's leader, currently Kim Jong-un.

After Christian missionaries entered the country and began to spread the Gospel, "they were all blacklisted and red-flagged" by the government, Kim Chung-seong said, and "more than half of them are in hard labor prison camps throughout the country."

Yet despite poor conditions and the threat of imprisonment, the number of Christian believers in North Korea is growing, Kim said, and their faith is strengthened through persecution.

"The one thing that the North Korean regime fears the most, and is afraid of, is the spreading of the Gospel," he said. "Because the Bible and the Gospel speaks the truth. Once the light shines in the dark room, there is light in the room."

When Christians gather for prayer or worship, "it's on a family level" to avoid detection by authorities, Kim said. Christians leave their houses and "we retreat either to the riverside, the mountainside, somewhere remote."

"We cannot go into any building," he added.

The government uses a "facade" network - the Korea Christian Association - to discover who Christians are in the country, and many "are taught to believe that this Korean Christian Association is real," he said. The association also delivers "falsified information" to the international community to pretend like there is religious freedom and religious pluralism in North Korea.

"They [the government] will do anything to prevent the spread of the Gospel in North Korea. [But] as you can see, we cannot block the sunlight with our hand," Kim said.

He asked for prayers for the Christians in North Korea, especially for "this freedom that we can find in Jesus Christ."

"And please pray for the two nations to be unified," he implored.