Why do Filipino Catholics share an amazing devotion for the Black Nazarene?

Free World Class Education
FREE Catholic Classes
'To understand the devotee you have to be a devotee.'

For over four centuries, a historical and iconic miraculous statue of Jesus Christ carrying his Cross has become an emblem of passion, struggle and faith for Filipino Catholics. 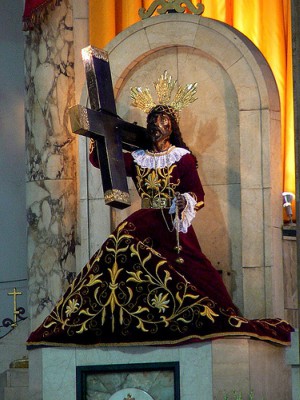 Understanding the Black Nazarene in the Philippines.

Manila, Philippines (CNA) - The life-size statue of Jesus is enshrined in the famous minor basilica popularly known as the Quiapo Church, located in the Archdiocese of Manila. The statue has survived the blazing fires that destroyed the church twice, two earthquakes, the floods of numerous typhoons and bombings during World War II.

The church which hosts the statue never sleeps. It welcomes devotees early in the morning till late evening. During the day, it holds continuous Masses and healing services. During the night, the church shelters poor homeless people. In the early morning, the church is cleaned and again reaches out to the pilgrims and devotees.

Every year on Jan. 9, the annual feast day, millions of devotees gather to celebrate the Feast of the Black Nazarene. They take part in the spectacular religious procession known locally as the "Traslacion," during which devotees carry a replica of the statue across Manila.

Up to 18 million participants are expected to take part in this year's procession and the festivities that surround it.

Pope Innocent X specially recognized the Philippines' strong devotion to the Black Nazarene of Manila in 1650.

Msgr. Jose Clemente Ignacio, the rector of the Minor Basilica of the Black Nazarene, said that some people wait in line for seven hours without complaint, simply to touch the image.

"They say Filipinos are resilient, but where is this resiliency coming from? It's the practice of our faith," he told CNA.

Msgr. Ignacio spoke more about the Black Nazarene and its related devotions. The text of the interview is below, edited for clarity and brevity.

CNA: Could you describe Quiapo Church for us?

Msgr Ignacio: The church is one of the most popular churches in the country as it is home to the miraculous Black Nazarene, a much-venerated statue of Jesus Christ which many people believe has miraculous attributes.

St. John Paul II recognized the church as the Minor Basilica of the Black Nazarene because of its role in strengthening a deep popular devotion to Jesus Christ and because of its cultural contribution to the religiosity of the Filipino people.

CNA: What is the historical background of the Black Nazarene statue of Quiapo?

Msgr. Ignacio: A first group of Augustinian Recollect missionaries landed in Manila in 1606 from Mexico. They brought with them a dark image of Jesus Christ kneeling on one knee and carrying a large wooden cross. The image was first enshrined in St. John the Baptist Church at Luneta in 1606 and after two years was moved to a bigger church nearby. Over a century and a half later, in 1767, the image was transferred to Quiapo Church whose patron is also St. John the Baptist.

In 2006, we celebrated the 400th anniversary of the arrival of the image of Black Nazarene in Manila.

CNA: Explain to us the devotion to the Black Nazarene at Quiapo

Msgr. Ignacio: In the words of Archbishop of Manila, Cardinal Luis Antonio Tagle, "To understand the devotee you have to be a devotee. Only a devotee could best understand a devotee."

People have sensed the spiritual wealth in Quiapo Church and there is a huge attendance for Mass every day and especially on Friday.

However, it's the feast day that gathers together millions of devotees who walk in the procession, called the "Traslacion" of the Black Nazarene. Here in Quiapo Church you can witness many stories of the faith of the people, those who are patiently lining up for seven hours without any complaints. They just want to pray and touch the image of Black Nazarene. There are huge queues for confessions.

They say Filipinos are resilient, but where is this resiliency coming from? It's the practice of our faith. 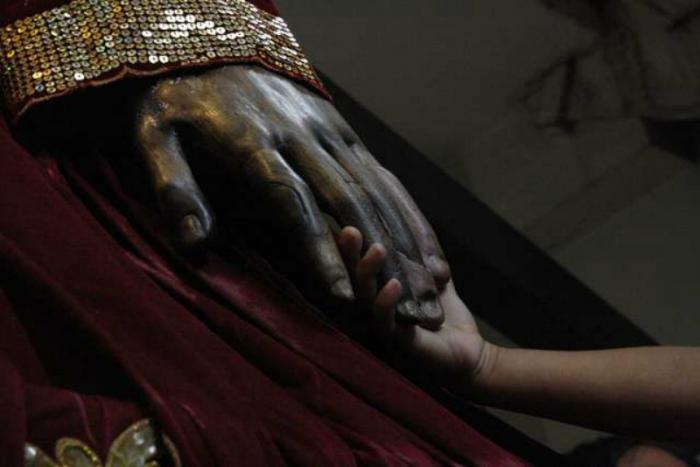 CNA: Tell us more about the procession called "Traslacion" of the Black Nazarene.

Msgr Ignacio: "Traslacion" means the transfer of the Image of Black Nazarene. In a way it is imitating the Calvary experience: the sacrifice and suffering that our Lord endured for our salvation like when Jesus was walking barefoot, carrying the cross to Mount Calvary.

The devotees also want to give back to God by participating in the suffering of our Lord and entering into the Paschal mystery of Christ.

It is also commemorating the transfer of the image from Lunetta to Quiapo, when we first received the statue in 1868. Since then, because of the many answered prayers, people have been celebrating the feast on January 9.

The barefoot procession of an almost 4.3-mile journey starts from the Quirino Grandstand at Luneta and snakes its way towards the narrow streets. Passing through the city's winding roads, after 19 hours of spiritual euphoria, the procession eventually reaches Quiapo at the Basilica Minore de Nazareno. The devotees flood by to touch the image and throw cloths to touch the image, before receiving the cloths back.

Our culture is a culture of touch and, significantly, in a way we want to touch heaven.

CNA: How do you explain this popular devotion and its importance to bring people to faith

Msgr. Ignacio: Maybe in the past in the Western world the contemplatives' experience of undergoing retreats in monasteries, retreat houses etc. was a contemplative way of entering into the mystery of Christ.

But there was also another, lay-focused way of having retreats by making pilgrimages. St. Francis of Assisi, St. Anthony, St Ignatius of Loyola--they also undertook pilgrimages which involved suffering and bodily benance in the process of entering into the Paschal mystery of Christ.

The devotion in Quiapo is somewhat similar to a pilgrimage experience and ecery year they come and somehow something changes in the people.

Popular religiosity is not being encouraged because there are elements that need purification... but we cannot dismiss this, because through popular piety our faith has been introduced in our home and in our families. We have been introduced to the prayers, the Rosary, the statues of the saints, the Way of the Cross.

Somehow it has a value and I guess the people here know that there is a very deep gold mine of the spiritual fruits that they can experience in Quiapo Church.

Somehow some theologians have not fully grasped this wealth that is these popular religious devotions. The Second Vatican Council encourages them and does not dismiss them. Pope Francis is asking us to support and strengthen, understand and find meaning in popular piety.

CNA: Has the decotion increased, and what is the impact of this decotion in living the Christian life in the community?

Msgr. Ignacio: The devotion has definitely increased. On weekdays there are about 10 Masses celebrated, there are also healing services. We expected only a 10 to 15 percent increase (in attendance) this year. But we were astonished that there was a 30 percent increase and lot of dioceses are asking for crucifixes from Quiapo Church.

Somehow the devotion is growing. You can see the effect of the devotion is to bring out more compassion. Even in just the "Translacion" experience (volunteers) are helping out with the medical team, water, food, so there is lot of compassion.

CNA: How is Quiapo Church helping disaster victims and fostering devotion elsewhere in the Philippines

People are giving. Even when disaster strikes there is a second collection. But where the disaster impact is big we help in rehabilitation measures.

In Bohol (a province ravaged by Typhoon Haiyan in 2014) we have finished 72 houses and given them to different families. We joined relief programs in other dioceses and granted scholarships and ran a livelihood program through our Black Nazarene Foundation, which is the distribution arm of the Quiapo Parish.

We are giving one crucifix to every church so that devotees are nourished in their devotion to the Black Nazarene. Our pilgrim image too keeps visiting parishes and dioceses.

This article was originally published on CNA May 27, 2015.