Free World Class Education
FREE Catholic Classes
'One of the important things about Mother Teresa is she reminds people that they're loved and not forgotten.'

While the Vatican prepares to canonize Mother Teresa, the city of Calcutta has been alive with celebrations. 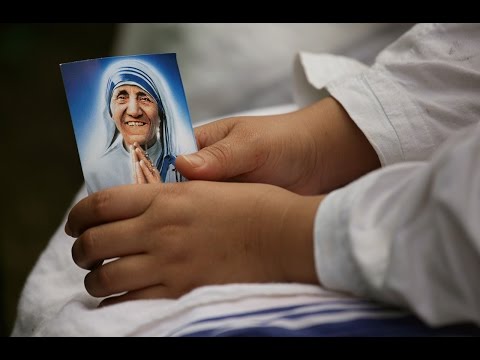 LOS ANGELES, CA (Catholic Online) - The streets of Calcutta are full of independent photographers, who have been busy snapping pictures for Rome's open-air galleries on September 4, the day of Mother Teresa's ascension into Sainthood.

The photographers will pay their own way to Rome and one "business professional" explained: "This is our tribute to Mother. These images will depict the inspiration that must have attracted Mother to this city."

Seminars, exhibitions and prayer meetings are held each day in Calcutta to reflect Mother Teresa's heart for humanity and her tomb has been moved to the ground floor of the Missionaries of Charity, for all to visit and pray.

According to the Catholic Herald, a popular street has been renamed Mother Teresa Sarani and is expected to host several celebrations through Christmas.

Mother Teresa's influence has been acknowledged around the word but in Calcutta, her influence helped other believers answer their calls and strengthen their faith.

"Mother Teresa has always been the icon for the confluence of faiths, and that's why I have such devotion for her saintly powers," Aarti Kumari, a regular visitor to the city, described.

"It was her influence that I joined the order at 18," Sister Ruth of Andhra Pradesh state explained, as another woman who simply identified herself as Federica from Rome stated: "I came volunteering for Mother's home at her call, and I feel so fulfilled."

Meanwhile, at the Missionaries of Charity headquarters, some of Mother Teresa's relics are on display but a single drop of her blood has been sent to the United States, where two parishes in Chicago will proudly display it.

The Chicago Tribune reported the blood is currently on display at the convent and women's shelter on West 24th Place in Pilsen.

It will be on display for the first time at a Roman Catholic parish in the city of Chicago for one week, then it will be moved to St. Ita Catholic Church in the Edgewater neighborhood.

Rev. Bob Roll, the pastor of St. Bride, a parish plagued by surrounding chaos and shootings, stated: "We realized what a chance it was to bring some hope to the South Shore. Every time you hear about the South Shore, it's a shooting."

The Rev. Richard Fragomeni, professor of liturgy explained Mother Teresa's story of love and humble giving "is what inspires you to turn to her. Most of us lived within that story, because many of us knew (of) her when she was alive.

Rev. James Clavey, a priest living at St. Bride since surviving a brain injury a few years ago, believes praying before Mother Teresa's relic is what allowed him a divine moment in which he felt her presence.

Now that her blood will arrive at St. Bride soon, he explained the location is "a place Mother Teresa would feel called to because of the honoring of serving the poor."

St. Bride parishioner Van Bensett agreed: "On the South Side you always feel like you're more forgotten than other parts of Chicago. One of the important things about Mother Teresa is she reminds people that they're loved and not forgotten."