Those who sorrow for their brother in need, a brother whom they see, will eventually come to feel sorrow not only for their brother in need, but also to the God whom they do not see.  And act of love for man will translate into an act of love for God.  You cannot say you don't love God when you love your brother.  Presumably, this works the other way, also.  That is, those who are the beneficiaries of the works of mercy become open to the fact that there may be a God whom they do not see, one who loves them like the Christian whom they do see.  This reality is what Pope Francis hopes to seize on in his recent apostolic exhortation, Evangelii Gaudium. 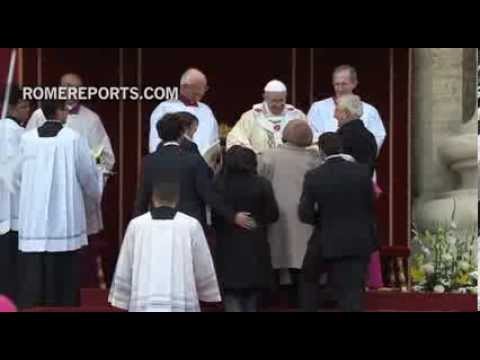 CORPUS CHRISTI, TX (Catholic Online) - In an earlier article entitled "The New Evangelization: Exorcising the Demon of Obtuseness," I wrote about the "demon of obtuseness" as Evagrius Ponticus called it in the Philokalia, or the "loss of the sense of sin" as Popes Pius XII, John Paul II, and Benedict XVI had identified it.  To these recent popes, the need to re-develop or re-instigate a sense of sin, or a moral acuteness, was an essential part of the "New Evangelization.".

In his apostolic exhortation Evangelii Gaudium, Pope Francis has significantly downplayed this aspect, and I suggested in that earlier article that a clue to his reasoning might be found in the closing comments of Evagrius' reflections on the demon of obtuseness.

Evagrius notes how difficult it is to exorcise the demon of obtuseness: it is impervious to interventions, reasoning of any kind, preaching, lecturing of all kind.  It cannot be reached, at least not in this manner.

Evagrius notes, however, that the demon of obtuseness--the demon behind the loss of the sense of sin--is rarely found in the monks who live in community, but is a common feature in the solitary hermit, the individualist.

The reason for this, Evagrius says, "is clear."  And that is that when our brothers and sisters around us "fall into misfortune, or are afflicted by illness, or are suffering in prison, or meet sudden death, this demon is driven out."

The demon of obtuseness is driven out from those who are in need, and those who help those in need is what Evagrius suggests.

The demon of obtuseness who is behind the loss of the sense of sin is driven out by seeing and helping our brother and sister in need, that is, poor, or sick, or hungry, or thirsty, or in prison, or sorrowing.  It brings us out of the shell of ourselves--what Evagrius calls the sin of self-esteem--and makes us look at the Other in our brother and sister.  And this eventually gets us to see The Other, God.

Why is it that the demon of obtuseness is driven out in this fashion?  Evagrius says that the soul will naturally experience sorrow or compassion for those about him that are suffering, especially when giving them aid and comfort.  And even a little bit of such an emotion causes the "callousness caused by the demon" of obtuseness to dissolve.

Essentially, Evagrius is saying is this:  Those who sorrow for their brother in need, a brother whom they see, will eventually come to feel sorrow not only for their brother in need, but also to the God whom they do not see (i.e., repentance).  An act of love for man will translate--eventually or perhaps even now implicitly--into an act of love for God.  You cannot say you don't love God when you love your brother.

Presumably, this works the other way, also.  That is, those who are the beneficiaries of the works of mercy become open to the fact that there may be a God whom they do not see, one who loves them like the Christian whom they do see.

A parallelism exists between Evagrius's thought and Pope Francis's thought in Evangelii Gaudium.

Pope Francis, for example, complains of the "individualistic" character of our consumerist, self-serving, materialistic culture, and its "indifferent and self-centered mentality."  (EG, No. 62, 208)  And, to the contrary, the apostolic exhortation is peppered with references to communal life, to community and communities.  By my count, these words--communal, community, communities, communion--are used a total of ninety-four times in the apostolic exhortation.

So likewise is the word mission which Pope Francis defines as "going forth" to others.  The words mission and missionary are used at least a hundred times if they are used once.

The "biggest problem" in evangelization according to Pope Francis is that the spiritual obtuse hear only the "secondary aspects," "certain issues which are part of the Church's teaching"--to which they do not relate--and so turn a deaf ear to the "heart of Christ's message."  EG, No. 34.  If you start with moral truths, the spiritually obtuse will hear only nagging.  This is Evagrius's point.

So, by inviting even those at the periphery, those at the "fringes of humanity," indeed "everyone without exception"--the sinner included--"to respond to the God of love who saves us, to see God in others and to go forth ourselves to seek the good of others" (yet, he is quick to add, "without distorting the message" and assuring that the "integrity of the Gospel message . . . not be deformed"), Pope Francis hopes to circumvent the demon of obtuseness.  (EG, 39, 46, 49)

"The primary reason for evangelizing," Pope Francis says, "is the love of Jesus which we have received, the experience of salvation which urges us to ever greater love of him."  He asks rhetorically: "What kind of love would not feel the need to speak of the beloved, to point him out, to make him known?"  (EG, No. 264)

This love for God and the fact that he loved us first, will compel us to go out, to "to enter fully into the fabric of society, sharing the lives of all, listening to their concerns, helping them materially and spiritually in their needs, rejoicing with those who rejoice, weeping with those who weep; arm in arm with others, we are committed to building a new world. But we do so not from a sense of obligation, not as a burdensome duty, but as the result of a personal decision which brings us joy and gives meaning to our lives." (EG, No. 269)

For this reason, Pope Francis wants a new "'mystique' of living together, of mingling and encounter, of embracing and supporting one another, of stepping into this flood tide which, while chaotic, can become a genuine experience of fraternity, a caravan of solidarity, a sacred pilgrimage."  (EG, No 87)

This sense of mission likewise seems to be at the heart of his desire strongly to emphasize the care for the poor, the outcast, the vulnerable, the unborn, the homeless, the elderly, the sick, refugees, the addicted, in short, the suffering.

Like Evagrius, this Pope believes that this going outwards, this sense of mission, helps both the evangelist and the one being evangelized:

"When we live out a spirituality of drawing nearer to others and seeking their welfare, our hearts are opened wide to the Lord's greatest and most beautiful gifts.  Whenever we encounter another person in love, we learn something new about God.  Whenever our eyes are opened to acknowledge the other, we grow in the light of faith and knowledge of God."  EG, No. 272.  Gone is the demon of obtuseness.

There will be fruits to this St. Francis insists, even if we don't see them all at once.  By emphasizing the Gospel truth that Jesus loves and Jesus saves, fruits will come.  They will come by suppressing or, perhaps the better word is downplaying--if for a time (after all, "time is greater than space" (EG, 222-25)--the bases for developing a sense of sin, the natural moral law, and the moral precepts of the Church in all their rigor.

If you build it, it will come.  This New Evangelization built by Francis, he believes, will make an end run around the demon of obtuseness, and allow us to save souls.  But this promised "fruitfulness is often invisible, elusive and unquantifiable," Pope Francis admits.

Yet he assures us: "We can know quite well that our lives," spent in evangelizing using his methodology, "will be fruitful, without claiming to know how, or where, or when.  We may be sure that none of our acts of love will be lost, nor any of our acts of sincere concern for others. No single act of love for God will be lost, no generous effort is meaningless, no painful endurance is wasted."  (EG, No. 279)

Will it make a difference?  I hope so.  God knows I wish that there would be fire on earth, and that it were already kindled.  I would love all peoples, all nations, all religions, every person to acknowledge Christ as King and his social reign.

But will it make a difference? Only God knows.

Not to be a "sourpuss" or anything, but the devil of obtuseness is not the only devil out there.  There are the devils of theological, moral, and political liberalism.  There is the spirit of the anti-Christ most prevalent in resurgent Islam.  There is the demon Priapus--and his legion of succubi and incubi--among us.  Methinks they smell opportunity.

I hope that in his efforts to trick the devil of obtuseness Pope Francis does not unwittingly give aid and comfort to the demon of obtuseness' equally unsavory siblings.