Hosanna in the Highest: Blessed is He Who Comes in the Name of the Lord

Who invites us into this rite of passage, this rite of mystery, is revealed by the words which follow.  Hosanna!  These are the words proclaimed by the crowds of Jerusalem which we incorporate into the Mass.  These crowds waved palm fronds at the Lord Jesus in his triumphant entry into Jerusalem, a predicate to his sacrificial, atoning, and saving death on the Cross.  The Sanctus is like a mini-Palm Sunday. 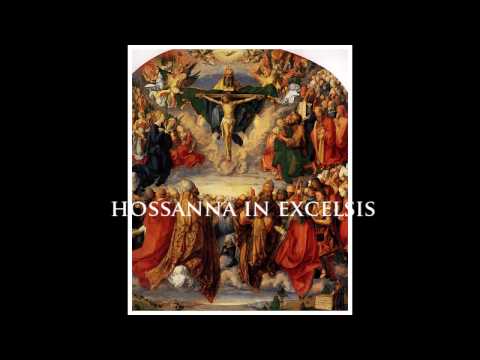 CORPUS CHRISTI, TX (Catholic Online) - In this article which is part of the series Tres Linguae Sacrae, we focus on the Hebrew word Hosanna.  It is found in the Old Testament, in the Gospels, and in our Liturgy, and so most of us are familiar with it though we may not know its meaning.  In the Liturgy of the Mass it is found in the prayer we call the Sanctus (from its opening word, which means "Holy" in Latin).

We therefore encounter the word Hosanna immediately before the Canon or Eucharistic Prayer--the most sacred part of the Mass.

We encounter it before the Lord comes to us in the Mystery of Faith which is the Eucharist.

We encounter it before we are witness to the ministry of the priest, who, acting  alter Christus (as another Christ), offers Christ himself to the Father, and so brings into the present in an unbloody and yet real manner the bloody Sacrifice of the Cross.

We encounter this word before we step into the World's Greatest Act of Adoration and the very whirlwind of the love of God the Father, God the Son, and God the Holy Spirit.

It is an important word, with deep Scriptural connotations, and for this reason perhaps, it traditionally is left in its original Hebrew.

The Sanctus closes off that part of the Mass that is referred to as the Preface which begins with the Sursum corda ("Lift up your hearts!").  This is the prayer that prepares us for entering the Holy of Holies to worship God, the very inner sanctum of the Temple which is Jesus' Body, and which we offer to God in a holy and pleasing Sacrifice.

This prayer--or perhaps better biblical hymn which is quite ancient--is knit from scriptural yarn.  It brings new and old threads out of the Scriptural storeroom, and ingeniously and harmoniously weaves them together, the warp of the Old Testament perfectly fitted with the woof of the New. (Matt. 13:52)

Here, at the very door into the Canon or Eucharistic Prayer, we are offered "all choice fruits," both "fresh and mellowed fruits," both new and old, kept in store for us by our love, the Lord Jesus.  (Cf. Songs of Songs 7:14)

And, at least in the Latin (and also in the Greek liturgies where the prayer is likewise found), two choice fruits come to us in Hebrew words that are transliterated (and not translated) from the original Hebrew: Hosanna (Ωσαννά) and Sabbaoth (Σαβαώθ).

As a little background, we might note that the words "Holy, holy, holy" come to us from Isaiah 6:3, where the great Jewish prophet tells us of his vision of the Lord in the heavens.  These words are part of the heavenly refrain of the seraphim:  "'Holy, holy, holy is the Lord (YHWH, יהוה) of Hosts! (Sabbaoth, צבאות)' they cried one to the other. 'All the earth is filled with his glory.'"

These seraphic paeans of praising worship and worshiping praise are repeated in slightly different phraseology in St. John's vision of the heavens in Revelation 4:8:  "Holy, holy, holy is the Lord God almighty, who was, and who is, and who is to come."  (As we discussed in a prior article, when the Greek Scriptural text uses the term "Lord God" it is intending, following common Hebrew practice of the day, to refer to the unutterable name of YHWH.)

By these very words of the Old Testament, we are being ushered out of the antechamber of earth into the very chambers of the heavens, into the very audience hall of God most high.

Who invites us into this rite of passage, this rite of mystery, is revealed by the words which follow.  These are the words proclaimed by the crowds of Jerusalem which we incorporate into the Mass.  These crowds waved palm fronds at the Lord Jesus in his triumphant entry into Jerusalem, a predicate to his sacrificial, atoning, and saving death on the Cross.  The Sanctus is like a mini-Palm Sunday.

We repeat their words--Hosanna--as it is enshrined untranslated in the Gospels, thus in no uncertain terms as we shall see linking Jesus to the God of Israel who has saved his people.

In tying this historical event in 1st century Jerusalem to Isaiah's seraphic vision of God in the highest heavens, the Sanctus is a paradigm of the Augustinian principle: Novum in vetere latet.  Vetus in novo patet.  The New Testament is hidden in the old.  The Old Testament is revealed in the new.

And (implied in the reference) is the remainder of the Psalm, both the verses which precede and those which follow verses 25 and 26.  They are all Messianic:

Put all this together and we are informed that we are entering God's temple--Jesus--and the altar in that temple--Jesus--to give thanks to God and savior--Jesus--and to exalt him in thanksgiving.  The Hosanna in the Sanctus has Jesus all over it if you look at the Scriptural nooks and crannies of the word.

The Mystery that is God was revealed in history when the Son of God became man and entered Jerusalem on a colt, the foal of an ass. (Matt. 21:5)  He comes to us again in the even more humble form of Bread.  What other nation is so great as to have a Lord that is this close, this nearby, this meek that he comes in a tangible, even edible form?  (Deut. 4:7)

The Transcendent God of the Jew became the Incarnate and Immanent God in Jesus, and is able to ride a donkey, is able to make himself the Bread of Life, is able to suffer and die for our sins.  So this is nothing other than a confirmation of that wonderful Preface for Christmas where we acknowledge (in a rather loose, but utterly beautiful, English translation) that in Jesus "we see our God made visible and so are caught up in the love of God we cannot see."

But we stray.  Let us turn to that one mysterious word Hosanna.  It is not really one, but actually two words in Hebrew--הושיעה נא--often transcribed as Hoshi'a-na.

The word Hoshi'a (הושיעה) is a verb, and it is in the imperative.  It is a plea for help: Save!  Deliver! Rescue! Defend! Preserve!

In other words, it is a virtual cry, even a demand, for help, for salvation, for deliverance from sin, from death, from an eternal separation from God.  It contains within itself the utter realization that we are at our resort's end--that we have nowhere else to go.  It contains the logic of St. Peter written all over it: "Lord, to whom shall we go?  You have the words of eternal life."  (John 6:68)

The word Hoshi'a has the sense of urgency, of desperation, like the man drowning who cries to one on shore to throw him a lifeline, and can only shout "Save me!"  He'll shout this even if the King or Emperor happens to be walking by.

The final part of Hosanna--the Hebrew "na" (נא)--is an interjection, a particle of entreaty, one with extreme urgency, even desperation attached to it: We pray!  Please!  Now!  Attend!  This is the only instance where it is attached to a verb in the Hebrew Scriptures.

Yet it is clear from its use in the Gospels that the word Hosanna not only expressed the sense of anguish or existential dread of a life without God--as is the sense we find it in Psalm 118--but it also has the connotation of an imminent victory, even joy.

Jesus--whom we shall encounter in the Mass--is the answer to our existential dread, the promise of our release from sin and from death.  But he is also our thanks, and our joy, and the confirmation of our ultimate victory.

What else, then, can we say immediately before our encounter with the Lord in the Blessed Sacrament and the Sacrifice of the Mass but this: