The Most Sacred Heart of Jesus: Divine Refuge of Love and Happiness

Free World Class Education
FREE Catholic Classes
Within the sacred heart of Jesus, pierced for love of humankind, is contained the full depth of the divine treasures of love and mercy, grace and salvation.

Man's natural desire for happiness is of "divine origin: God has placed it in the human heart in order to draw man to the One who alone can fulfill it" (CCC 1718). Our Savior, in an incomparable act of divine compassion, offered his Sacred Heart for the good of humankind, in order to fulfill man's irrepressible thirst for happiness and love. 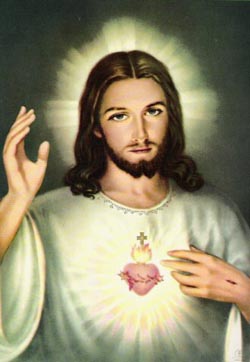 GLADE PARK, CO (Catholic Online) -- The Catholic Encyclopedia informs us that, while devotion to the love of Jesus dates to the apostolic Church, the first unmistakable signs of devotion to the Sacred Heart of Jesus appeared in the eleventh and twelfth centuries, where it arose in the fervent atmosphere of either the Benedictine or Cistercian monasteries. During this time, the wound in the heart of Jesus symbolized the wound of love: He was "pierced for our offenses, crushed for our sins" (Is. 53:5). In an infinite outpouring of Divine Love, the Sacred Heart of Jesus is wounded for our sins and for the love of mankind.

The vision of St. Gertrude (d. 1302) on the feast of St. John the Evangelist marks a notable point in the history of the devotion. While resting her head near the wound in the Savior's side, St. Gertrude heard the beating of the Divine Heart. She asked St. John if, at the Last Supper, he too had felt those delightful pulsations, why he had not spoken of them. He replied that this revelation had been reserved for subsequent ages when the world had grown cold, at which time its love would need rekindling (ibid.).

From the thirteenth to the sixteenth century, although the devotion was quite widely practiced, it yet remained a private and individual one of the mystical order, with no general involvement among the laity. In the seventeenth century, the devotion began to further spread when Blessed Jean Eudes established a feast day for it. But it was through St. Margaret Mary Alacoque's (1647-1690) numerous and profound revelations that Jesus chose to invigorate devotion to his Sacred Heart. On the feast of St. John, as with St. Gertrude before her, Margaret Mary was permitted to rest her head over the Savior's heart, which, like a floodgate, opened to her the wonders of Jesus' superabundant love:

"And He showed me that it was His great desire of being loved by men and of withdrawing them from the path of ruin into which Satan hurls such crowds of them, that made Him form the design of manifesting His Heart to men, with all the treasures of love, of mercy, of grace, of sanctification and salvation which it contains, in order that those who desire to render Him and procure for Him all the honor and love possible, might themselves be abundantly enriched with those divine treasures of which this Heart is the source" (Revelations of Our Lord to St. Margaret Mary, qtd. from sacredheartdevotion.com/).

That the Son of God, eternally begotten of the Father and made man by the power of the Holy Spirit, through whom all things were made (Jn 1:3), should desire to be loved by men, is of itself astonishing! Here we are presented with an apparent paradox: the omnipotent and omniscient second Person of the Holy Trinity, whose divine nature lacks nothing in itself and is in need of nothing outside itself, reaches out to finite humanity with a tender compassion that is entirely beyond words. This compassion is bound up in a love of such immense depth that, for our sake, Jesus is moved to die an unimaginably painful death on a Roman cross. God did not become man and suffer and die to add something to himself, for there is nothing that can be added to God's flawless perfection and infinite glory. Rather, Jesus poured out the most precious blood of his Sacred Heart for the salvific good of mankind.

True God and true man, whose divine nature is the fount of life and light of men (cf. Jn 1:4), thirsts to draw all men into his most Sacred Heart, the well-spring of his love, and thus re-create humankind as sons and daughters of God. What are we, whose life passes by as a shadow (Wis. 2:5), that the Word made flesh should offer his living heart on the cross, giving of himself for our sins as the sacrificial Lamb of God? We are undeserving of these incomparable acts of love. Yet God has done them. Further, continuing to act and intervene in human history, Jesus this moment thrusts open the sublime treasures of his Sacred Heart upon mankind, that we "may have life, and have it abundantly" (Jn 10:10).

Associated with the practice of devotion to the Sacred Heart are twelve promises given by Jesus to St. Margaret Mary, with special promises for those who participate in the Liturgy of the Mass and receive Eucharist on the first Friday of the month for nine consecutive months:

"I promise you in the excessive mercy of my Heart that my all-powerful love will grant to all those who communicate on the First Friday in nine consecutive months, the grace of final penitence: they will not die in my disgrace, nor without receiving their Sacraments. My Divine Heart shall be their safe refuge in this last moment."

Safe refuge. Is that not the desire of every man, even those who do not yet know Jesus? Is not there an irrepressible force within every human heart, whether Christian or otherwise, that leads us to both hope in and seek out permanent, safe refuge? There is perhaps no other time when the desire for safe refuge is more pressing than the moment of death. In our final hour the illusions of self-reliance and disordered autonomy and power, all of which are built up by the structures of pride, if they have not already done so, must evaporate in the face of our encounter with God.

But man desires safe refuge throughout his life. We might say, then, that man is a refuge seeker. The desire for safe refuge is bound up with man's desire for happiness. And it is no accident that man seeks happiness; for God has placed within man's heart such an unceasing desire in order to lead him steadily and with unwavering purpose toward his end-goal of perfect happiness: a reality attained in God alone. Ultimately, then, there can be no permanent, safe refuge apart from God. Nor can lasting and perfect happiness be attained outside of the Sacred Heart of Jesus, who so loved the world as to open his own heart to it.

If we desire mercy and love, happiness and refuge, these and every other grace -- whether conceivable or inconceivable -- are freely offered by Jesus. For our part we may receive these treasures if we will but seek shelter through faith in the most Sacred Heart of Jesus, and thus give our heart to him as he gave his to us, in an embrace of divine and human love.

"Grant, we pray, almighty God, that we, who glory in the Heart of your beloved Son and recall the wonders of his love for us, may be made worthy to receive an overflowing measure of grace from that fount of heavenly gifts" -- Roman Missal Collect, The Solemnity of The Most Sacred Heart of Jesus