Unjust laws pose dramatic problems of conscience for morally upright people: when they are called to cooperate in morally evil acts they must refuse. Besides being a moral duty, such a refusal is also a basic human right which, precisely as such, civil law itself is obliged to recognize and protect. 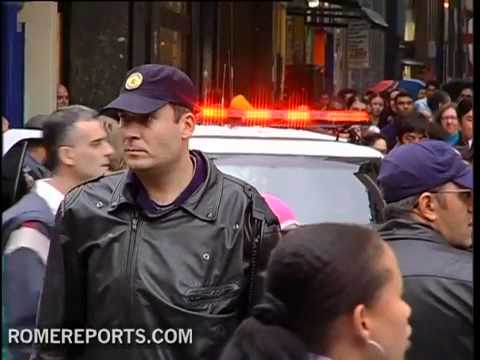 CORPUS CHRISTI, TX (Catholic Online) - The Christian navigates between two pole stars, as it were.  On the one hand, he recognizes the divine warrant given secular authorities.  He remembers that the early Christian following the example of Christ the Lord respected the civil authority of Caesar.  "You would have no power over me," the Lord told the Roman procurator Pontius Pilate, "if it had not been given to you from above." (John 19:11)

Sts. Peter and Paul enjoined their flocks to obey all governing authorities, including Caesar who had arrogated to himself powers he did not have, and whose philosophy of government was wholly false. (E.g., 1 Pet 2:15; Rom. 13:1)  Ordinarily, therefore, Christians ought to be model citizens, conscientiously required to follow the laws of the State.

And yet absolute obedience is never due the State.  Any arrogation of divinity by the State is absolutely rejected by the Christian.  Here is the veiled teaching behind Christ's answer to the query by those sent by the Chief Priests seeking to entrap him either as a revolutionary or a bad Jew, a trap he deftly avoided:

"Is it permissible for us to pay taxes to Caesar or not?" But He was aware of their cunning and said, "Show me a denarius. Whose head and name are on it?" "Caesar's," they said."Well then," He said to them, "give back to Caesar what belongs to Caesar - and to God what belongs to God."  (Luke 20:21-25).

The coin Jesus pointed to, one ought to add, claimed falsely that Caesar was divine.

With these soft-spoken words, Jesus ushered in a revolution in political thought.  Wherever the words of Jesus take root and sprout, there will be a separation between political power and moral and religious truth, a de-divinized political order.  The political order will be demoted, constrained, circumscribed.  Its desire to be a "mortal God," as Hobbes would have it, will be muzzled.  The Beast has been tamed.

And if Caesar has the temerity, the audacity of trespassing on moral truth or human conscience, the Christian may not respond with the obedience enjoined by Sts. Peter and Paul in ordinary situations.  In such extraordinary situations--when Caesar trespasses the moral law and asks from his citizens what God forbids-- then we must stand with St. Peter and declare: "Obedience to God comes before obedience to men." (Acts 5:29)

The Compendium of the Social Doctrine of the Church addresses the issue of when and how St. Peter's teaching that obedience to God comes before obedience to men applies in the modern Christian's life.  It is a teaching she hates to pull out of her sheath, for it usually means that, as Shakespeare might put it, "something is rotten in the State of Denmark."

The latest HHS mandate is a concrete instance of a deeper political reality that American Catholics confront: a real threat from their governing authorities to their way of life.  This threat is the result of a unhealthy hodgepodge whose ingredients include the erosion of any moral consensus in the West, the increase in moral relativism built upon false notions of individuality and moral autonomy, a "reductive secularism" which neglects moral and spiritual truths and restricts truth to mere "scientific rationality" or "political power or majority rule," and the increased political intolerance from those with world-views hostile to traditional and Christian morality who have no compunction in imposing their views through the authority of the State.

These ingredients have given rise to a sort of political witch's brew.  It is a political witch's brew that Pope Benedict XVI recently referred to in the ad limina visits of the American Bishops as a "radical secularism which finds increasing expression in the political and cultural spheres."  This "radical secularism" is slowly backing Christians into those corners where obedience is no longer due civil authority.  Indeed, with the HHS mandate, there is no more backing up.

Presciently, or perhaps better, prophetically, Pope Benedict XVI foresaw and foresees increasing conflict between American Catholics and a public authority increasingly secularized and increasingly hostile to the moral values of its Catholic citizens.  The conflict is caused by the increasing demands of the State to "to deny the right of conscientious objection on the part of Catholic individuals and institutions with regard to cooperation in intrinsically evil practices."

The aggressive secularist State wants freedom of religion to be limited to "mere freedom of worship," and not to "freedom of conscience" which extends beyond the realm of the four walls of a Church into the "public square" of social, civil, political, and economic life."

It behooves us, therefore, to dust off the covers of the Compendium and re-visit the issue of when Christians must oppose themselves to civil authority, either by conscientious objection or, in an extreme situation and under carefully guarded circumstances, rebellion.

Christians may conscientiously object to civil laws if they infringe upon one or more of three things: (1) the law violates the moral order, that is, the natural moral law; (2) the law violates fundamental human rights; or (3) the law violates the teachings of the Gospel, which is to say the teachings of the Church.  Laws that trespass against one or more of these three things may not be obeyed, and obedience to them must be refused. In fact, the Christian has both a duty and a right to refuse such a law.  And though it may be unrecognized, it is a right that he must exercise regardless of the consequences to him.

The full text of the Compendium on this issue merits quotation:

"Citizens are not obligated in conscience to follow the prescriptions of civil authorities if their precepts are contrary to the demands of the moral order, to the fundamental rights of persons or to the teachings of the Gospel. Unjust laws pose dramatic problems of conscience for morally upright people: when they are called to cooperate in morally evil acts they must refuse. Besides being a moral duty, such a refusal is also a basic human right which, precisely as such, civil law itself is obliged to recognize and protect. 'Those who have recourse to conscientious objection must be protected not only from legal penalties but also from any negative effects on the legal, disciplinary, financial and professional plane.'"

"It is a grave duty of conscience not to cooperate, not even formally, in practices which, although permitted by civil legislation, are contrary to the Law of God. Such cooperation in fact can never be justified, not by invoking respect for the freedom of others nor by appealing to the fact that it is foreseen and required by civil law. No one can escape the moral responsibility for actions taken, and all will be judged by God himself based on this responsibility (cf. Rom 2:6; 14:12)."  (Compendium, No. 399)

The right of conscientious objection is not the right of resistance, and the two should be carefully distinguished.  Moreover, resistance which can be expressed in "many different concrete ways" should be distinguished from the last and desperate recourse of "armed resistance."

The right to resist an oppressive law or an oppressive government is one that is found in the natural law.  It is a right which precedes a government, and so is one that is inalienable.  Resistance generally is something to be avoided, and it is justified only if there is a "serious" infringement or "repeated" and chronic infringements of the natural moral law, a fundamental human right, or a Gospel precept.

"Recognizing that natural law is the basis for and places limits on positive law means admitting that it is legitimate to resist authority should it violate in a serious or repeated manner the essential principles of natural law. Saint Thomas Aquinas writes that 'one is obliged to obey . . . insofar as it is required by the order of justice.'  Natural law is therefore the basis of the right to resistance."  (Compendium, No. 400)

"There can be many different concrete ways this right may be exercised; there are also many different ends that may be pursued. Resistance to authority is meant to attest to the validity of a different way of looking at things, whether the intent is to achieve partial change, for example, modifying certain laws, or to fight for a radical change in the situation."  (Compendium, No. 400)

Resistance in the sense of armed resistance is something which is a last resort.  The Church has identified five conditions all of which must be met before armed resistance is morally justified: "1) there is certain, grave and prolonged violation of fundamental rights, 2) all other means of redress have been exhausted, 3) such resistance will not provoke worse disorders, 4) there is well-founded hope of success; and 5) it is impossible reasonably to foresee any better solution." (Compendium, No. 401)

As the Church observes, armed resistance, even if morally justified, is generally to be avoided, and passive resistance is to be preferred.  Armed resistance is often a Pandora's box which unleashes as much or more evil as it intended to avoid.

"Recourse to arms is seen as an extreme remedy for putting an end to a 'manifest, long-standing tyranny which would do great damage to fundamental personal rights and dangerous harm to the common good of the country.'  The gravity of the danger that recourse to violence entails today makes it preferable in any case that passive resistance be practiced, which is 'a way more conformable to moral principles and having no less prospects for success.'"  (Compendium, No. 401)