This traditional pilgrimage to the Shrine of the North American Martyrs promises "Answered prayers. Tons of them." The 2011 Pilgrimage for Restoration is set for September 23-25, 2011. 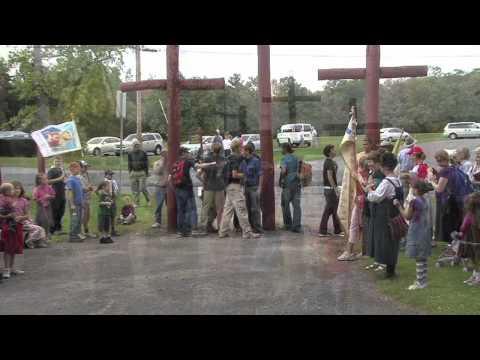 By Brother Andre Marie, M.I.C.M.
The Wanderer (www.thewandererpress.com/ee/wandererpress/index.php)
6/5/2011 (1 decade ago)

P>RICHMOND, NH (Catholicism.org) - The 2011 Pilgrimage for Restoration is set for September 23-25, 2011. This will mark the sixteenth time that a merry band of Catholic pilgrims cuts a path from Lake George to Auriesville, New York, doing penance all the way.

Rising very early in the morning, to assist at pre-dawn sung Latin Masses, pilgrims wend their way through verdant upstate New York singing hymns, praying the Rosary, and meditating together in their small "brigades," each of which is named after a saint or Christian mystery. At night, everyone camps in tents or under the open sky.

The pilgrimage is undertaken by young and old, families and singles, priests, religious, and laity, professionals, mothers, and students, all of whom are kept in good order and safety by the mercy of God and guiding hand of experienced pilgrimage administrators.

Masses on the trail are offered in a makeshift chapel-tent, and are in the traditional, or "Extraordinary Form" of the Roman rite. While the daily Masses are "High," the closing Liturgy on Sunday is a Solemn Mass, with deacon, subdeacon, and all the austere pageantry of Latin Christendom. Organizers emphasize that this is by no means a "traditionalist only" event. Everyone is welcome.

In 2009, Adirondack Life magazine published a feature article on the pilgrimage, a testimony to the fact that this is indeed a public profession of Faith. How could it not be? Passing motorists see quite a spectacle: praying columns march, bedecked with colorful banners and procession crosses, as priests with surplices and violet stoles confess the faithful in via.

Greg Lloyd, the Pilgrimage Director, informed me that the first pilgrimage in the fall of 1996 was inspired by the annual Chartres Pilgrimage in France. "The idea first sparked in a conversation with Arnaud de Lassus early in the 1990s, when we met in Vienna, Virginia," Lloyd told me.

The young American expressed his regrets for not being able to go on pilgrimage in France, when de Lassus invited him to participate in another way. The Association Notre-Dame de Chrétienté, who organized the French endeavor, wished foreigners to bring the pilgrimage to their homelands. "Monsieur de Lassus asked me, why not make pilgrimage to a shrine in the States?"

The Shrine of the North American Martyrs, in Auriesville, New York, was an obvious choice. While Greg was courting Susan Tardiff, his bride-to-be introduced him to the shrine, and he bore a fascination for it ever since.

Most of the North American Martyrs died on the Canadian side of the border, but three of them (St. Isaac Jogues, St. René Goupil, and St. Jean de la Lande) died about 370 years ago in what is now New York State. St. René was martyred in the Mohawk village of Ossernenon (now Auriesville), where his precious remains were lost.

I asked Greg Lloyd why people traditionally go on pilgrimage. "To pray" he said, "for favors spiritual and temporal of all sorts, and to do penance for sins: mine, yours and ours. And that's just it: pilgrimage is a 'communal thing'. You only have to be on the road for ten minutes weakened in the scorching heat or out in the wilderness to realize how dependent we are on God and on the members of the Church along the way, also on the way to heaven. Even the destination shows our belonging together, and underscores the communion of the saints: we pray the whole way, and when we arrive, to the patron or patrons who made holy the very place we are visiting by his, her or their presence."

Aside from these traditional reasons for making pilgrimage, the Auriesville journey has its particular allure. "Practically every pilgrim says the same thing year after year," Lloyd relates. "The pilgrimage gives a glimpse of what living the faith in common, living in a Christian society, really is. That's a great lesson for us Americans, who have never known a Christian nation from the inside. Arguably the only Christian nation ever to grace the shores of North America was Huronia, thanks in great part to the saintly Joseph Chihwatenha, whom his spiritual Father, St. Jean de Bebeuf, called 'the pillar of the Church in North America.' But can you tell me the last time you met a Huron?"

The going can be difficult, but Lloyd encourages the timid to take heart: "Our byword of many, many years is: don't worry, nobody makes pilgrimage alone. God is with us, every step of the way. We come to believe that more surely because we see His Charity at work also among so many fellow pilgrims, who even though tired and ornery themselves, go the extra mile as it were, to 'carry' you when you feel you can't go on anymore. And when everyone is too tired to carry you, there is always a van or two of angel-volunteers shadowing the column, just waiting to take you away." There are also nurses, "the blister brigade," who tend to the pilgrims' aches and pains as needed.

Is there any record of answered prayers or special blessings from the pilgrimage? "Yes," Lloyd replies. "There have been not a few vocations - religious, clerical, and matrimonial - 'born' on pilgrimage. Onlookers have been introduced to our holy faith and mother Church, many for the first time. Many who were 'lukewarm' by their own admission have become more fervent in the practice of their faith. The attraction of the ancient Roman liturgy has done wonders in that respect, too. Even a few non-Catholics have joined us over the years, and have become believers, thanks be to God."

Asked what people can expect on pilgrimage, Lloyd bluntly responds, "Answered prayers. Tons of them."

To find out more about the Pilgrimage for Restoration, interested persons may contact the National Coalition of Clergy and Laity, 621 Jordan Circle, Whitehall PA, 18052-7119; telephone: 610-435-2634; email: coalition@fast.net; web: http://pilgrimage.stblogs.com.

[This article was originally published in the May 12, 2011 edition of The Wanderer.]

The Wanderer has been providing its readers with news and commentary from an orthodox Catholic perspective for over 135 years. From vital issues affecting the Catholic Church to the political events which threaten our Catholic faith. The Wanderer is at the forefront every week with its timely coverage and its cutting edge editorials.