St. Monica: Mother of Augustine, Model of the Virtuous Mother

Free World Class Education
FREE Catholic Classes
What does it mean to be a saint?

The saints were men and women who, in love with the fullness of truth, not only lived for God, but lived in God. They were people whose love for God rose to such heights as to illumine all of created reality in its true light. In everything they saw God's reflection: in the eyes of a tender and innocent child; in jeweled, dew covered trees on a fall mourning; in the sadness of the injured; in the eternal grandeur of the sky. The saints lived by St. Paul's words: "Whether, then, you eat or drink or whatever you do, do all to the glory of God" (1 Cor 10:31). 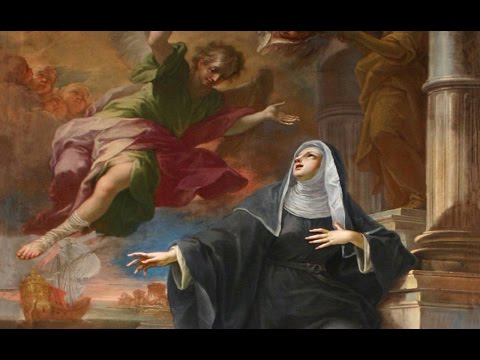 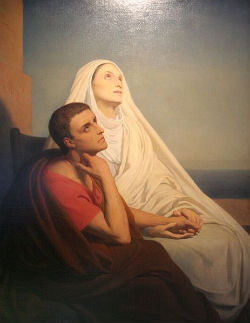 St. Monica with her son, St. Augustine, for whom she prayed over a period of seventeen years.

GLADE PARK, CO (Catholic Online) -- St. Monica was born to a Christian family in North Africa in 333 A.D. Married as a young maiden to Patritius, a pagan who held an official position in Tagaste, her life was filled with disappointment and trial, for Patritius was a man of frequent short temper and dissolute habits. Yet, though faced with daily tensions and difficulties in her unhappy marriage, St. Monica continually displayed a profound and dedicated love for God. Though her habits of prayer, almsgiving, and acts of charity annoyed Patritius, no doubt being the cause of significant friction in their marriage, Monica refused to ignore her duty toward those words of Christ, "Come, follow me" (Mt 4:19).

It is clear that St. Monica possessed an inner strength that cannot be obtained by human effort alone. Some would look at her life and see little but unhappiness, tragedy and pain. They would see a woman married to a man who may have rarely shown her any love, a woman whose life was one of bleakness and confrontation, struggle and insecurity. But what did St. Monica see in her life? Who was this woman who, a model of the virtuous mother, lived so long ago, in a time so different from our own?

Though there are many who ask, "What is a saint?" and "Who is a saint?", contemporary society has, to a large degree, nearly lost all understanding of what or who a saint is. It is not that the majority is unconcerned with the meaning of "saint," rather it is quite unaware of these true heroes, men and women whose love for God shined forth for all to see. As a result, the saints have often become not a people dimly known, but rather a foreign people whose holy lives are blinded from view in a modern-day landscape colored by relativism and indifference.

It is helpful to understand who the saints were by understanding who they were not. The saints were not a people of sporadic prayer, irregular attendants at Mass, who passed outside church doors only to indifferently go on about their business of life while blending in with the weeds. They were not halfhearted, uncommitted people who saw the truth as little more than a pliable lump of clay which can be manipulated to serve their interests. For the saints, God is not someone whom they turn to only when a particular occasion warrants; nor is God a part-time quest, thought about when there seems nothing else to think about; nor is God seen as a changeable "power" in the universe which adapts itself to whatever "spiritual" notions a particular individual might have.

The saints were men and women who, in love with the fullness of truth, not only lived for God, but lived in God. They were people whose love for God rose to such heights as to illumine all of created reality in its true light. In everything they saw God's reflection: in the eyes of a tender and innocent child; in jeweled, dew covered trees on a fall mourning; in the sadness of the injured; in the eternal grandeur of the sky. The saints lived by St. Paul's words: "Whether, then, you eat or drink or whatever you do, do all to the glory of God" (1 Cor 10:31).

We have all seen the sun's rays pass through a cloud-covered sky, cast down upon the earth in glowing, translucent streaks. When we look at this light flowing from the heavens, our gaze may be momentarily drawn toward the earth, yet it quickly returns to the light's origin, that burst of brilliant light which issues forth from the parting clouds. So it is with the saints: touched by the reality and heat of God's infinite love, their gaze is constantly drawn toward the Source of Light, who is the Origen of Life from which all else gathers its light.

It is God who casts his light upon the saints and draws them to himself; God parts the clouds of the soul, flooding it with his unfathomable light which warms those hidden recesses, burning away impurities which obscure the path to the heights. The soul who, in docile response, gives itself completely over to this Light, fixing its gaze on the Beloved who so graciously illumined its inner depths, is a saint. In this light the reality of existence is unveiled to the soul, and, regardless of whatever it might be surrounded by in the world, the soul intuitively knows its beginning and end is in God alone. God is everything, he is desired above all else, he is the supreme and incomparable Treasure for which the soul would gladly and without delay give its life. Thus the soul lives immersed in God, truly sharing in the divine life of the Beloved, which gives the soul great strength, allowing it to overcome tragedy and trial with ease, for all is seen as a path to God, preordained by the Beloved as a way of light.

Drawing her strength from God, St. Monica embraced the path of light which flowed from the heavens, and thus saw the reality of her life and the true beauty of motherhood. She saw in her life a divine purpose, one of heroic virtue in prayer, persistence in living a life of holiness, and maternal care for God's children. The power of her prayers are attested by her husband's conversion, for shorty after he was received into the Catholic Church he died. What would have become of Patritius if not for St. Monica's prayers?

Much of what we know of St. Monica revolves around her son, St. Augustine, and the long seventeen years in which she prayed and labored for the salvation of his soul. We read in St. Augustine's Confessions of the perils of his former life: "See what I was in myself and by myself. I had destroyed myself, but He who made me remade me." Though by his own admission he at one time lived a life of laziness and impurity, St. Augustine is today one of 33 Doctors of the Catholic Church, the Doctor of Grace and the Doctor of Doctors.

In St. Augustine's Confessions is recorded his last hours with his mother, St. Monica. He tenderly speaks of her, and of the final time they spent together in Ostia on the Tiber. He tells us the substance of one of their last conversations together was that they pondered what it might be like "to share the eternal life enjoyed by the saints, 'which eye has not seen, nor ear heard, which has not even entered into the heart of man'" (1 Cor 2:19).

St. Augustine continues: "in the course of our conversation that day, the world and its pleasures lost all their attraction for us. My mother said: 'Son, as far as I am concerned, nothing in this life now gives me any pleasure. I do not know why I am still here, since I have no further hopes in this world. I did have one reason for wanting to live a little longer: to see you become a Catholic Christian before I died. God has lavished his gifts on me in that respect, for I know that you have even renounced earthly happiness to be his servant. So what am I doing here?'"

It indeed appears that after St. Augustine's conversion St. Monica saw her life's work as finished, for she suddenly fell ill and died at Ostia, a town a few miles south of Rome. It was the year 387. Many speculate that she offered her life in exchange for her son's -- the supreme maternal sacrifice. St. Monica is remembered as a model of the virtuous mother.

Deacon F. K. Bartels is an ordained minister of the Catholic Church, a Deacon. He is also a  Catholic writer who knows his Catholic faith is one of the greatest gifts a man could ever have.