It's much worse than we imagined! Civilization could collapse within decades as Earth's sixth mass extinction event accelerates

Free World Class Education
FREE Catholic Classes
There is hope, but not much time for change.

Our planet faces a disaster of epic proportions as new research shows that animal and plant species are in much steeper decline that previously believed. Even common species that are not considered endangered are losing staggering numbers, prompting scientists to declare that a mass extinction event is underway. 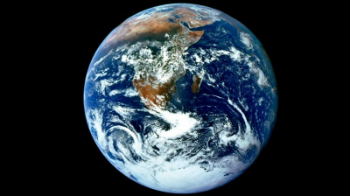 Earth is in the midst of a sixth mass extinction.

LOS ANGELES, CA (California Network) -- Mass extinction events have happened in the prehistoric past, and none of them have been pleasant. In each case, life on Earth was nearly wiped out. We face a similar event today, and it could have similar results with massive numbers of humans that are alive today, living to see the collapse of the animal kingdom and humanity.

In 2014, it was revealed that the earth lost half its wildlife in the previous 40 years. At that rate, the other half would be lost in less than 40 years. About 40 percent of the life in the sea has been lost. Much of it eaten, the rest destroyed by pollution. Plastic waste alone kills thousands of animals a day. The loss of a single keystone species, that is an organism whose survival critically impacts the environment, could initiate a chain reaction collapse. The result is that the food chain on Earth could collapse by 2050 at the latest.

The loss of bees is a textbook example of the loss of a keystone species. Without bees to pollinate crops, agriculture as we know it would be devastated. Bee populations remain in decline.

There have been five previous mass extinction events. Some 443 million years ago, Earth nearly froze over, causing ice to form and sea level to drop by 100 meters. Most of the life on Earth was in the oceans, so this was a major loss of habitat. Once the ice melted, the freshwater starved the oceans of oxygen. About 70 percent of all living organisms went extinct.

Around 360 million years ago, a similar event impacted life in shallow seas. Corals were hard hit and about 70 percent of all species died out.

At 250 million years ago, another mass extinction was caused by the eruption of a supervolcano in Siberia. The added CO2 in the atmosphere caused rapid global warming.  Ninety-five percent of all life on Earth went extinct. This was the largest and most dramatic loss of life in planetary history.

About 200 million years ago, another volcanic event wiped out about 75 percent of life on Earth. Dinosaurs evolved in the wake of this event.

Finally, 65 million years ago, an asteroid struck the Earth and finished off the dinosaurs who may have already been dying out due to another outburst of volcanism. Mammals flourished in the wake of this disaster. 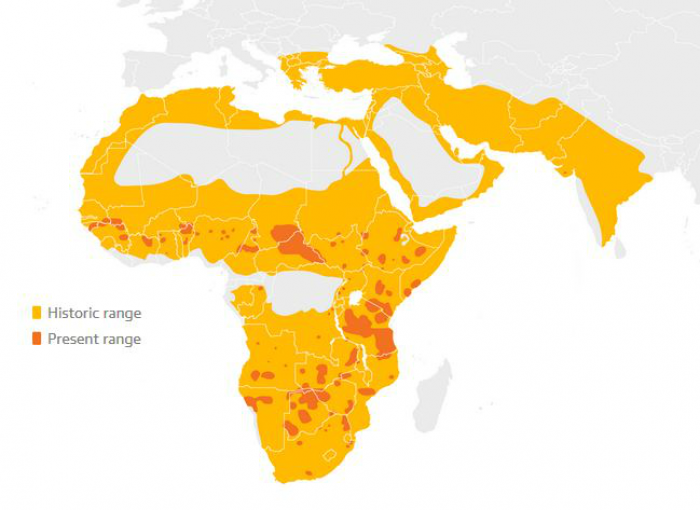 The mass extinction of lions is an excellent example of what we are doing to even the common species.

Research now reveals that billions of local species have been lost in recent decades. Species are going extinct at rates many times higher than the normal, background rate. Estimates vary from between 1,000 times that rate to 10,000 times that rate.

Worse, the latest research reveals that even common animals are losing habitat and numbers at alarming rates. These animals are regarded as common, so their collapse is not being very well monitored.

Because the extinction event is being caused by humans, we could halt the event by modifying our behavior. However, this is unlikely. More likely, we will continue to destroy habitat and eat everything we can find until it is too late. 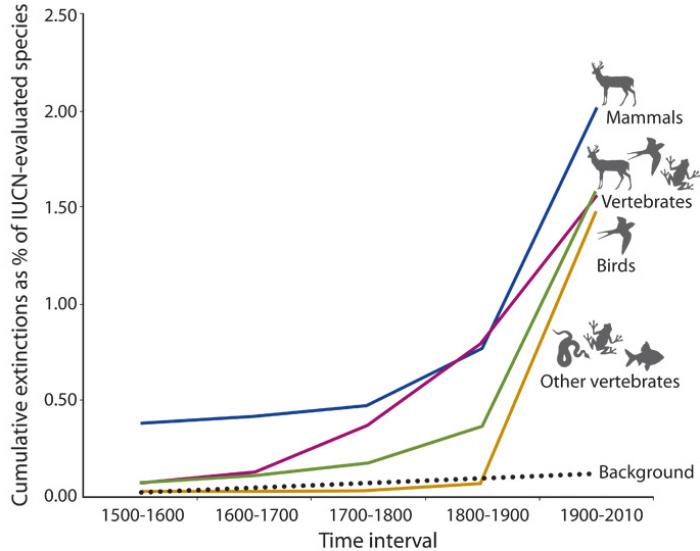 The extinction rate for vertebrates is much higher than the natural background rate, and does not seem to be improving.

Within the next two generations, a massive ecological disaster will impact and could bring about the end of civilization as we know it. Instead of nuclear war, the greatest threat could be our greed for living space and food.

A similar ecological disaster may have occurred before, and could serve as a cautionary tale. Easter Island was populated around 900 AD, and flourished for about 700 years. However, as the population grew, the demand for land and food also grew. Eventually, all of the island's native animals were taken for food, leaving people to eat insects for protein. Trees were felled to make a form of dough that could be eaten. Sometime in the seventeenth century, an islander cut down the last tree on the island for food. After that, thousands of people starved and the population may have been reduced to cannibalism.

The population of the island collapsed and remained in decline when Europeans finally visited the island in 1722. The population was eventually enslaved and reduced to just 111 people at its low point in 1877.

Does Easter Island suggest what is to come? Humans being humans, it is possible. But there are changes that could make a difference.

Vertical farming has already stated and will move expansive farms indoors where they operate more efficiently and with greater output. The need for massive tracts of land for growing food will decline. Cultured meats are also in development and will arrive on the market within the next decade. These are meats grown from animal stem cells in a factory setting, eliminating the need to ranch live animals. Both of these developments will boost the food supply while relieving pressure on land and resource use. Nature could recover large tracts of land.

The use of the combustion engine is coming to an end with the development of electric and self-driving vehicles. Experts think fossil fuel usage will begin to decline in about a decade or so, which will help curtail climate change.

The development of robots and AI to handle tasks also means more work can be performed without the need for exploitive or low-intensity human labor. Such labor tends to pollute and consume land. Humans may enjoy a higher standard of living with less work to do. High productivity means more resources available to devote to conservation.

What happens is entirely up to humans to decide, but our time to make decisions and effect changes is short. There are millions, if not billions of species that cannot afford to wait a decade for humanity to change its behavior. For these organisms, there isn't much hope. We ourselves had best hope and pray none of these creatures is essential to our survival, or we may not get long to regret our indecision.