More than 500 earthquakes have hit Yellowstone as the supervolcano under the park recharges with magma. The recent spate of quakes, which began on June 12, have hit near the Montana - Wyoming border near the town of West Yellowstone. Scientists are studying the seismic activity to see what they can learn. 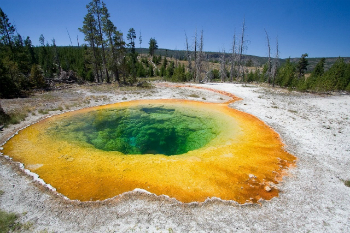 The magma plume that feeds the supervolcano under Yellowstone is also responsible for the park's incredible beauty.

LOS ANGELES, CA (California Network) -- A killer lurks underneath one of America's most gorgeous national parks. Yellowstone National Park sits on top of a supervolcano, caused by a hot plume of magma deep beneath the Earth's crust. That killer plume of magma, which feeds the supervolcano, is responsible for the beautiful park above. The geysers and fertile soil are all a product of volcanism. That same volcanism will someday kill most of the life on Earth.

A supervolcano is a massive volcano with a caldera or crater, that can be tens of miles across. There are dozens of supervolcanos around the world, but most show little activity. Present hotspots include an area that spans Naples in Italy and the caldera region of Yellowstone National Park.

The supervolcano in Naples, known as Campu Flegrei is likely to erupt within the next several years, and while the eruption will destroy part of the city, it will not be a full-scale event that threatens the world.

However, activity at these places is a reminder that great killers lurk underground.

The last eruption of the Yellowstone supervolcano took place 630,000 years ago. Each major eruption of a supervolcano changes the Earth's climate for years. Particles of ash block sunlight, causing the temperature to drop. Supervolcanoes have been implicated in mass extinction events, and should one erupt in the present age, there is no reason to think it would be different.

If the Yellowstone supervolcano erupted, most of the United States, particularly to the south and east, would be destroyed. The blasts would kill people close by; then ash would bury people farther away. Anyone who breathes the ash would destroy their lungs within minutes. The ash coats the lining of the lungs, making it impossible to breathe.

The plume of ash from the eruption would circle the Earth within days, blocking out sunlight. Temperatures would drop so much that snow could fall at sea level in the tropics.

Deprived of heat and light, many plant species would die, setting off a chain reaction of extinctions.

The good news is that while the quakes show the Yellowstone supervolcano is recharging with magma, the process could take centuries. It is hoped that by the time it does erupt, we have developed enough to protect our planet and ourselves from catastrophe.