Here is what a 99-million year old bird looked like

A 99-million year old bird has gone on display following extensive study. The bird, which is trapped in amber, is one of the most well preserved, and complete specimens of its kind. It reveals a link between dinosaurs and birds that has changed the way we understand both. 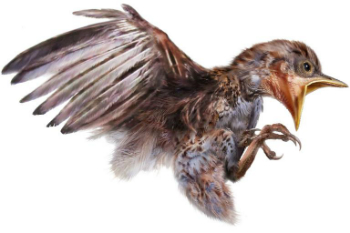 The bird as it would appear if it were removed from the amber.

LOS ANGELES, CA (California Network) -- Perhaps the greatest discovery about dinosaurs is that birds are descended from them, and they may have had feathers. Since the hypothesis was originally proposed, we have discovered feathers dinosaurs and a wide variety of toothed birds.

Now, a remarkable specimen will be put on display at the Shanghai Museum of Natural History until the end of July. The specimen features an Enantiornithes, a type of prehistoric bird with teeth.

The specimen comes from the rich amber fields of Burma and is entirely encased within a three-inch nugget of amber. Its claw is easily visible, and it was acquired by a collector who was intrigued by the piece. Some 99 million years ago, the juvenile bird became trapped in the amber which slowly encased the poor creature.The amber preserved its body for millions of years.

Eventually, the specimen was presented to scientists who performed scans to digitally peel back the amber and see the exquisite specimen underneath.

What they learned is that the specimen is a baby bird, possibly just days old, but already with feathers. The bird might have flown if it had matured. Some scientists suspect the bird was able to fly as soon as it hatched. Its plumage ranged from dark brown to gray, and it has teeth, something modern birds lack. 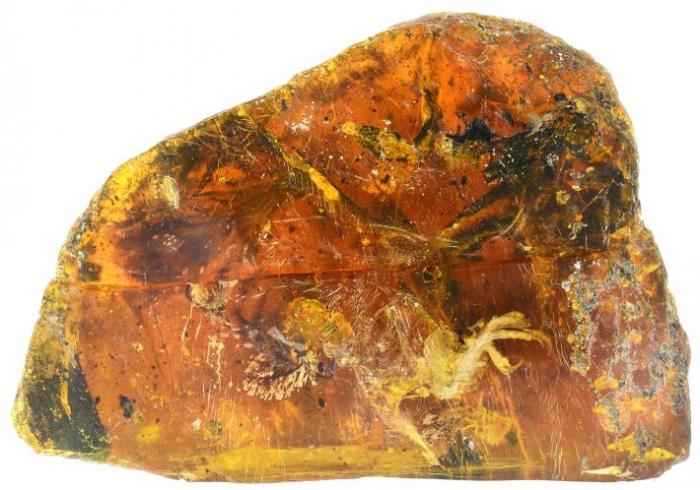 The bird encased in amber. This remarkable specimen is on traveling display.

The specimen was dubbed "Belone" for an Asian species of the skylark.

Large numbers of fossils have been discovered, remarkably preserved in prehistoric amber. Many of these fossils retain their natural colors and even DNA. Studies of these remarkably well-preserved fossils are changing what we know about dinosaurs.

It is suspected that dinosaurs may not have been cold-blooded as modern reptiles are.

There are many more discoveries to come as workers excavate ancient amber beds, and new fossils come to light.