Congressional hearing on global warming asked the wrong question. Here's what we should be talking about

It's the Scientists vs. the Representatives as congressional hearings zero in on climate change and the scientific method. Unfortunately, the entire hearing is wrong. 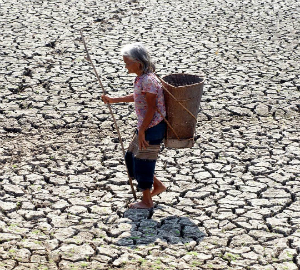 LOS ANGELES, CA (California Network) - A panel of scientists have testified before a Congressional committee, offering various answers on the question of whether global warming is happening and if it is a threat to humanity. They also took shots at one another, highlighting the personal nature of what should be an exclusively scientific, professional disagreement.

The hearing was scheduled by Chairman Lamar Smith (R-TX) and was titled, "Climate Science: Assumptions, Policy Implications, and the Scientific Method."

The panel of scientists featured Dr. Judith Curry, Dr. John Christy, and Dr. Roger Pelke Jr., who are skeptical of the current consensus that global warming is a threat to humanity, and Dr. Michael Mann who is ardent in his support for the scientific consensus. Mann has been accused of feuding with the other scientists on the panel. Mann is also responsible for the famous "hockey stick" graph which predicts that global temperatures are spiking faster than at any time in history. Skeptics dispute his conclusions, and feuds have developed.

Curry, Christy, and Pelke are defined by the mainstream media as "skeptics" because they challenge, on scientific grounds, that global warming is happening, or more precisely the degree to which it threatens humanity. It should be noted that all good scientists are skeptics, and skepticism should not be used as a pejorative label.

Rep. Rohrabacher (R-CA) drove home this point when angrily shooting down criticism of those who disagree with the mainstream scientific consensus that global warming is happening. Dr. Mann was repeatedly called out for his criticism of fellow scientists. Some of his commentary bordered on personal and embarrassing.

Sadly, spectacles like this routinely occur on Capitol Hill, and they yield no results. It is especially tragic when mainstream scientists - meaning those who accept the fact that global warming is happening and is an imminent threat to humanity, become harsh in their criticisms of those who disagree and feuds develop.

Despite this Dr. Mann, did make valid points. He warned that "dozens of independent lines of evidence come together... to arrive at the same, consistent answer, over and over again." Dr. Mann affirmed that extreme weather is on the rise because of human-induced climate change.

There are two problems. The first is the repeated demonizing of scientists who challenge the widespread conclusions reached by the majority of scientists. Instead of blasting the reputation of other scientists, the work of skeptics should be welcomed and considered at every turn. It may all be discredited as inaccurate or wrong over time, but due diligence requires that each skeptic be given a full and fair hearing. And they should be thanked for their courage to speak up based on their own work and observations.

We must remember the example of Galileo, who was persecuted for life because he challenged the mainstream assumption that the Earth was the center of the solar system. His conclusion was unpopular but correct. This is how science works. Paradigm shifts begin with the contrary conclusions of one or a few brave souls. If not for such courage, our understanding of the world would be much less.

The second problem is that we are still asking the wrong question. We are asking whether or not global warming is happening when we should ask how we will deal with the issue. The scientists have room to bicker over whether or not global warming is happening, and to what degree it is influenced by human activity. But there is another critical question: how do we intend to deal with the problem? This is a question of policy rather than science. This is the debate our representatives ought to be having.

If the dire predictions of global warming are right, then future generations will live in a world where climate is more dangerous, chaotic, and our coastal cities are under water. How will we respond to this?

The concern among many people is that governments will use this slow-motion natural disaster to compromise human rights.

To avoid this, we need to discuss how to adapt to this changing reality, and we need to assert that clean air, food and water, the bearing of children, travel, commerce, private property, and management of natural resources for the common benefit, are all irrevocable human rights.

If we do not work out a solution now, then the solution will be decided for us and forced upon us in a desperate moment, and we may not like that very much; we ignore this question at our peril.

It's time to embrace the skeptics as allies, and it's time for our policy makers to stop skewering scientists, and start working out how we will adapt to the developing problem.