Scientists discover a way to turn CO2 into methanol, could THIS be the key to reversing global warming?

Carbon dioxide has a bad reputation. It is criticized as the gas responsible for global warming. And while the global warming issue is more complex than CO2, it is the one chemical we can control. Now scientists think they have a way to turn CO2 into useful methanol, which can be used in a variety of products. 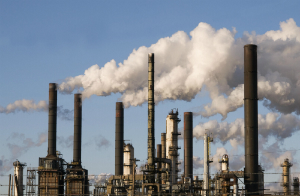 There may be a way to convert factory emissions to methanol, which is a valuable industrial product.

LOS ANGELES, CA (California Network) -- Global warming has been labeled the greatest threat to humanity since nuclear proliferation. This may be hyperbole, and it is certainly debatable, but it is a significant problem. The vast majority of scientists predict that global warming will cause the polar caps to melt and raise sea levels enough to inundate entire cities. It will cause weather patterns to shift and impact entire nations of people.

The cause of global warming is thought to be CO2 emissions released by human activity. While other gasses, such as methane and even water vapor, have more of a warming effect than CO2, it is CO2 that is being released in mass quantities and impacting the climate.

This reality has left scientists wondering how we can reduce these emissions. Scientists point out that CO2 emissions are a byproduct of industrialization, and policymakers reply that industrialization is essential to raising the standard of living for all people on the planet.

The situation creates an impasse where scientists warn policymakers to reduce emissions, and policymakers warn that industrialization is essential to progress.

Now, scientists may have found a win-win solution that could allow industrialization to continue without dumping CO2 into the atmosphere. 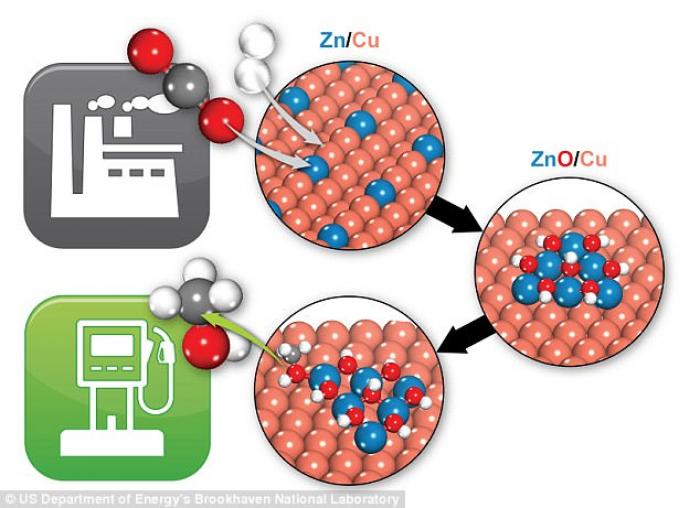 This diagram shows how carbon dioxide (carbon is the gray atom with two red oxygen atoms) is converted into methanol when run through a copper-zinc catalyst.

Researchers have found that a catalyst of zinc oxide, and copper can turn CO2 into methanol.

Having discovered this fact, the next step is to make the process practical. If that can be accomplished, new technology can be installed in factories and other places where CO2 is emitted and the gas can be converted into methanol.

Methanol is poisonous to humans, but has a wide variety of industrial uses. Businesses can convert their CO2 emissions into a profitable new output, and the environment will suffer less from the increased CO2 in the atmosphere.

The results of the study have been published in the journal Science.