A Catholic perspective on Standing Rock

What is happening at Standing Rock, and what is the Catholic Church's viewpoint on the protests? Americans appear to be taking sides on the issue, but where's the guidance for Catholics? Can we be neutral about it? 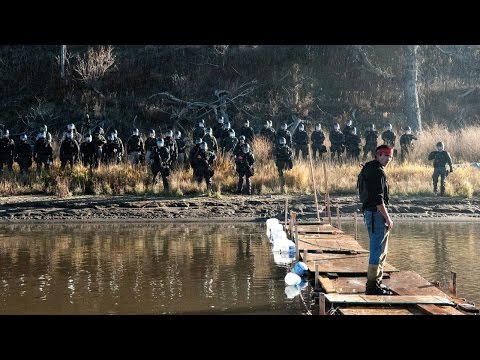 LOS ANGELES, CA (California Network) -- "Native Americans have organized one of the largest, continuous demonstrations in recent history against the Dakota Access Pipeline Project. This pipeline stretches over 1,100 miles and will transport crude oil from North Dakota to Illinois. It is widely viewed as a safer, more economical way to transport oil than by truck.

An alternative proposal to reroute the pipeline near the city of Bismarck was rejected to protect municipal water supplies. The obvious question follows: why compel Native Americans to tolerate a risk that was deemed too great for the residents of Bismarck? The residents of Bismarck stand to benefit from the pipeline, the Standing Rock Sioux, not so much. Over the last decade Bismarck has boomed and busted with the oil market.

Pipelines are not as impervious to problems as many people assume. Although pipelines are somewhat common already, they also suffer routine leaks and accidents. Since 1986, an average of 3 million barrels of oil have spilled from pipelines. In 2016 alone, there have been well over 200 pipeline leaks significant enough to mandate reporting and investigation, not to mention cleanup efforts.

From the sidelines, we are being invited to participate. Do we stand on the side of jobs and energy independence? Are pipelines safe and profitable enough that they're worth the risk? Is this project the latest episode in the long history of Native American maltreatment at the hands of the federal government and private industry? Is the pipeline an environmental disaster waiting to happen?

The answers on all these issues lies outside the realm of strident media reporting.

Pipeline are relatively safe, and the likelihood of a major spill that damages water supplies is lower than most assume. But if the people of Bismarck, who stand to enjoy the benefits of the project, don't want the pipeline in their back yard then why should the Native Americans be forced to accept it? Does the Golden Rule apply?

How will the Native American community benefit from the pipeline? Will the people of the Standing Rock Sioux Nation gain the jobs created by the pipeline? Will their water supplies or infrastructure be improved because of the project? How does this project improve the lives of the Nation's citizens?

The protests at Standing Rock are about more than the pipeline alone. The Native Americans also insist the pipe runs across sacred lands. We must accept the Nation's word on this, for who are we to dictate what is sacred to another?

But beyond that, there is the long-developed frustration that our Native American communities have been mistreated and neglected by the federal government for generations. The Native American people have never asked the federal government to interfere with their nations, but our national history is one of genocide and forced relocations. The Dakota Access Pipeline is literally the latest episode in our long history of Native American oppression. We are literally asking these people to tolerate something that their neighbors have refused to accept. That's racism.

The protests are also a lightning rod for issues that nobody talks about. It blends with the narrative of the big, evil corporate interest in cahoots with the federal government against the best interest of the common man. Decades of cronyism and insider dealing have spawned rampant cynicism. The protests and collective anger are a symptom of that cynicism.

Members of the Catholic Church are involved in the protests including clergy. Their involvement is a matter of private conscience. There are no parish-level organized activities in support of the protests that we are aware of. However, the environment is sacred to the people of all faiths, and as Catholics we are called to solidarity with one another.

At the same time, there are countless numbers of Catholics who fill the anonymous ranks of police and construction workers on the project. Their jobs are unenviable, but they see themselves as performing a duty and providing for their families. They have committed no crimes, and deserve respect.

The Catholic voice is missing from this controversy.

The Catholic perspective on this is one of mercy and solidarity.

There must be no violence associated with this project, and Catholics should not condone acts of violence. Prayerful protest is appropriate.

Central to this discussion, yet curiously absent, is the talk about how this project is impacting the lives of those who live near it. Every debate seems to hone in on legal limits, laws, and balance sheets. But does this project help more people that it could harm? Does this project truly do all it can to reasonably protect the people who are most likely to bear the risks? Do those who benefit have the permission of those who are paying for it by living next to it?

We must be constantly aware there are Catholics on both sides of the protests.

Concerning this project, there is room for diversity of opinion within the nave of our Church. But there is no room for greed, disrespect, racism, or ersatz morality framed exclusively by balance sheets and federal regulations. When forming your opinion, it is important to be informed, and most important to be Catholic.

What do you think about this project and the protests? Please share your opinion in the comments below.