What the USGS isn't telling you about Mt. Hood - Mt Hood a time bomb? A 'Silent' intrusion of magma?

Mount Hood possibly may be at risk for a Phreatic steam-explosion induced eruption that gives no-warning. 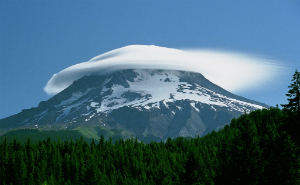 Something is happening beneath Mt. Hood. Should we be alarmed?

Experts are conceding that the Mt Hood earthquake swarming suggest that, deeper below, magma has accumulated beneath the volcano, which could be working its way to the surface. However they caution that the quakes do not indicate an imminent eruption.
Professor Emeritus Scott Burns at Portland State University states, "A whole bunch of earthquakes. Very small. One to two magnitude. A lot of them one right after another, we call a swarm."

"If you get swarms under a working volcano, the working hypothesis is that magma is moving up underneath there," he added. "It just reminds us that we live in a geologically active area. It may be related to an eventual eruption. If it is, we will know well in advance," he noted.

Currently, Mt Hood has been experiencing volcano-tectonic earthquakes.  These are the higher vibration frequency type of earthquakes.

Alicia Hotovec-Ellis, a volcano seismologist at the Pacific Northwest Seismic Network at the University of Washington and an expert on earthquake swarms, states that the Mt Hood quakes are "probably related to water moving through rock" and are "not seen as a warning of an eruption".

It is not disputed that water moving into shallow level magmatic heated rock may cause steam-blast explosions, referrred to as a "phreatic explosion".

As Mount Hood geologists believe water is indeed penetrating into the rock, and is the reason for the swarming, what if magma has intruded close to the surface? 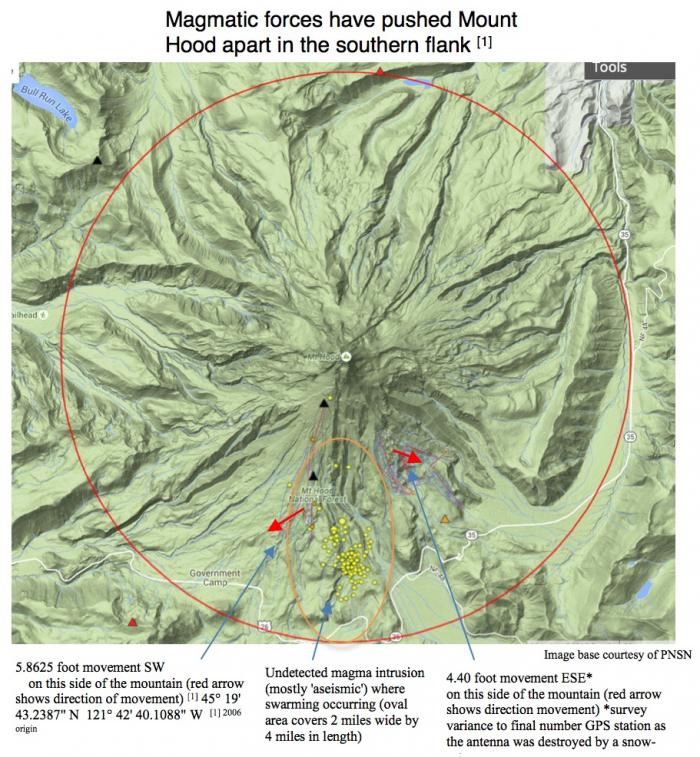 The southern flank of Mt. Hood is heaving.

This 'magma-water' combination would be alarming as it is the recipe for a "no warning" Phreatic explosive eruption.  Volcano tourists, at Costa Rica's Turrialba volcano, are warned of this rock bomb fatality danger from the unpredictable regular 5 to 10 Phreatic eruptions per month in the volcano's top crater dome.

When Turrialba started to have small earthquake swarms, like at Mount Hood, geologists believed that there was no risk of an "imminent eruption".  With no warning, to the horror of the geologists, a major eruption struck.  This violent phase of explosive activity, ejecting smoke and ash up to 3,000 meters into the air blanketed property with ash and caused hundreds of people to be hospitalized from ash inhalation to the lungs.  The eruptive trigger was deeper in the mountain, and has the pattern of a penetration of water into the deeper water source that triggered this "no warning" eruption.

"It seems me to be the strongest (Turrialba) eruption in the past six years," vulcanologist Gino Gonzalez commented to reporters. 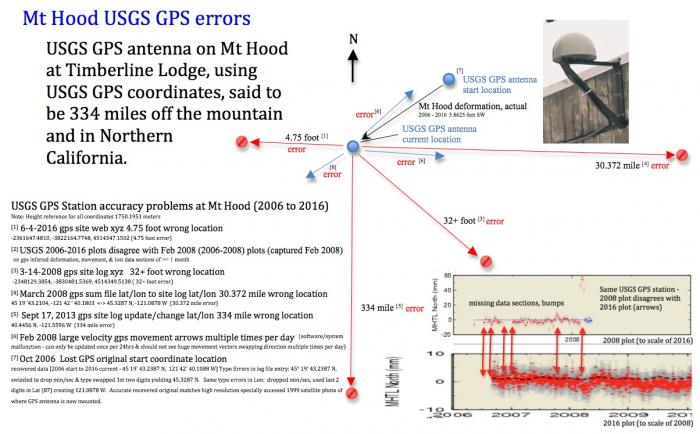 There are possible errors in the GPS data the USGS is using.

Mount Hood may be setting up a repeat of Turrialba.  Magma may already have injected and may be at closer depths to the surface than what the earthquake swarm indicates.  Private research data, in 2008, reveals that two areas of Mount Hood have been pushing apart as early as 2006.  This area encompasses a width of 2 miles with a length of 4 miles up/down the south flank of Mount Hood stretching to Hwy 26 & Hwy 35.

This researched area is now the exact area of the southern flank of Mount Hood that is having the swarming.

Here is why there is good reason to believe there has been a 'silent' shallow intrusion of magma.  A problematic history of a highly sensitive USGS GPS station may have masked the ability of geologists to notice this magma intrusion.  Numerous USGS coordinate errors, at this Timberline Lodge GPS station, have permeated in many different USGS data sources and files.  Currently, the USGS GPS coordinates lists this station 334 miles to the south in Northern California.

In fact, Mount Hood has a 250 ft deep Andesite Lava flow just south of Timberline Lodge, which was discovered by geologists while drilling into rock in performing a geothermal exploration study.

Although Mt Hood has some Basalt lava flows mixed in historic flows. Basalt is more viscous and typically less gas charged, thus it is less explosive. However, the larger volume flows on Mt Hood have been Andesite based Lava. Andesite based magma is less viscous (higher silica content) and is typically highly gas charged.  This combination thus is the most explosive.

Andesite based magma volcanoes have historically demonstrated around the world to be the one of the most destructive and explosive forms of stratovolcano eruptions.

Here is an example of what an Andesite magmatic stratovolcano can, Soufriere Hills, do to itself.

Geologists were astounded at the magnitude of the Soufriere Hills volcano explosion in July 2003, ejecting 275 million cubic yards of material! 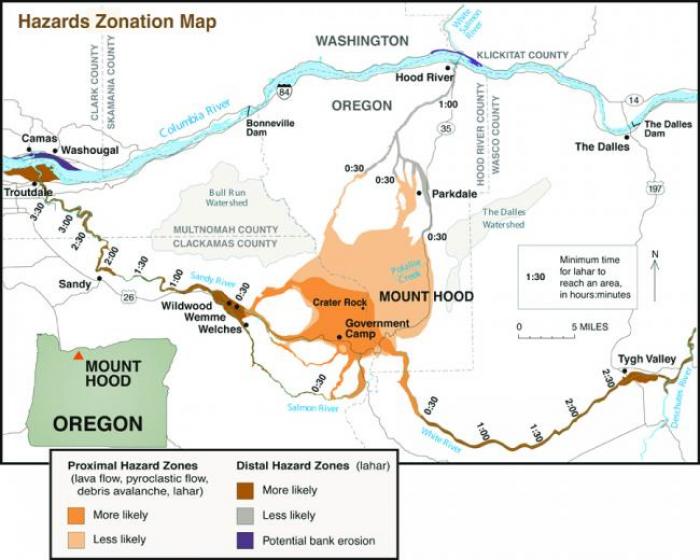 A risk map for eruptions on Mt Hood from any face direction. Note that the Bull Run Watershed is nearby to Mt Hood. This watershed, along with the large Bull Run Lake, provides the bulk of clean water for the city of Portland Oregon.

Using dialotometer data, they determined that a monster chain reaction formed where a small part of the mountain deflated whereby it triggered a massive and sudden release of supercharged gasses from the magma in the mountain - like a giant bomb.

Models showed that when the small part of the mountain deflated, and caused a rapid amplified shock wave, this caused the full 3D volume of the supercharged gasses in the magma to trigger simultaneously.