Are these oarfish in Mexico predicting an earthquake? Tourists film TWO live oarfish trying to beach themselves

An amazing new video shows two oarfish swimming just offshore in Mexico to the delight of ecotourists on a kayaking tour. The video, taken last March, shows the pair of fish possibly about to beach themselves. Oarfish are rarely sighted and legend associates their apparition near the surface with earthquake prediction. 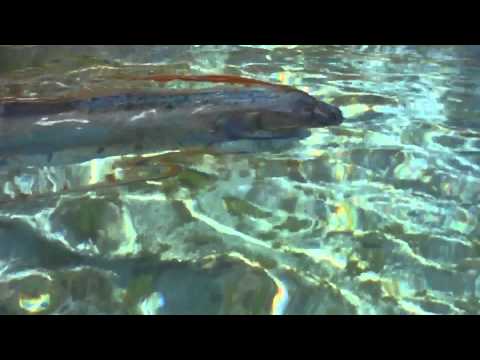 LOS ANGELES, CA (Catholic Online) - Ecotourists kayaking in the Sea of Cortez, Mexico, have captured an incredibly rare scene on video which was uploaded to YouTube yesterday. The tourists caught a pair of 15 foot-long oarfish swimming at the shore off Isla San Francisco in Baja California Sur in Mexico.

Light a candle to pray for safety and peace.

The video, which was uploaded by the Shedd Aquarium, in Chicago, was posted to the internet yesterday and already rumors abound of the oarfish's reason for swimming so close to shore. According to Japanese folklore, oarfish are sighted at the surface or beach themselves in advance of an earthquake. Some speculate that the deep-sea fish, which can inhabit depths of up to 3,000 feet, are highly sensitive to tectonic movements within the earth's crust.

In the video, delighted kayakers observe the oarfish approach the beach, only to turn away at the last moment. It is unclear if the oarfish were trying to beach themselves, or if they were disoriented. Oarfish normally inhabit deep waters where they feed on zooplankton and small crustaceans. The usually swim vertically, as opposed to horizontally, and they are notoriously bad swimmers. They can grow over 50 feet in length.

Their long serpentine bodies may be the reason behind legends of sea serpents.

Japanese folklore attests that oarfish beach themselves in the months before large earthquakes occur. In October 2013, two oarfish were found beached in southern California. Now, two living specimens have been filmed in Baja.

Perhaps coincidentally, two earthquakes recently struck the Los Angeles area in California, relatively near where the beachings occurred in October. Those quakes were the first noteworthy events since 2005, ending a nine-year long "earthquake drought" in Los Angeles.

Do the oarfish in Baja portend something similar?

Scientists say that's very unlikely and point to other oarfish beachings. Although oarfish are rarely sighted, they do occasionally show up at the surface, usually battered by currents or crippled with injury or illness. Since they are weak swimmers, the outlook is grim for oarfish that end up in these predicaments.

Moreover, no scientific correlation has been found between sightings and earthquakes -just anecdotal. However, anecdotes sometimes have basis in fact, so until science catches up to the story we will be left to wonder -and wait.