What is 'stagflation' and what happens when it happens?

It's a nightmare scenario, and it's coming soon. It's called 'stagflation' and this economic condition combines high inflation with high unemployment. The result is economic trouble which can lead to political turmoil, and worse. The handwriting may already be on the wall. 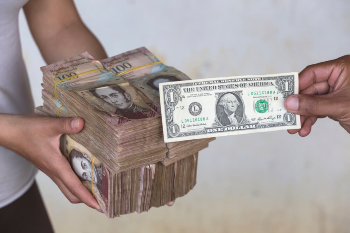 The Weimar deutschmark, the Venezuelan bolivar, is the dollar next?

LOS ANGELES, CA (California Network) - Inflation is surging. Inflation is the rise in prices over time. It's a natural part of any economic system, and some inflation is healthy and normal. Under normal conditions, retailers slowly raise prices to gradually increase their profits. This allows them to grow their businesses, offer raises to employees, and keep up with the completion and changes in the marketplace. In a market where almost everyone works and is getting pay raises to match inflation, nobody is likely to feel any financial discomfort. The numbers may tick up, but purchasing power remains the same. Purchasing power is the ability to buy a hypothetical basket of goods needed to sustain oneself and family at a reasonable or expected standard of living.

Inflation erodes purchasing power, unless pay keeps up. And since the 1970s, pay has not kept up with productivity. In fact, purchasing power for consumers has declined substantially for decades, forcing all adults in the household to become wage earners, and making it harder for young people to buy homes, cars, and other durable goods. So far, this problem has been solved with credit, but this merely results in people living in houses or driving cars while carrying increasing debt.

Generally, this isn't the crisis it sounds like since the typical worker improves their ability to earn wages over their lifetime and most can keep up the payments. But this scenario is becoming rare, thanks to a perfect storm of economic conditions.

First among the problems is COVID, which resulted in a global slowing of economic activity. Many small businesses were closed, never to reopen. This left millions of people without jobs. To sustain these people, governments began issuing money to people through generous unemployment benefits and stimulus checks. Businesses were also given easy stimulus money just to stay open. This combines with historically low interest rates, which were already near zero, and the final result is a glut of money.

With the global economy awash in government issued fiat-currency, that currency began to lose value. Even for the unemployed, money has been easy to get, and easy to spend.

The result of these conditions is a picky workforce with millions of unemployed people insisting on better pay and jobs before returning to work. Something that isn't easy to offer, especially in the service industry that requires armies of low-wage workers willing to do a plethora of jobs that can be thankless.

Now, the stage is set for staglfation. Stagflation is the economic condition where high inflation meets high unemployment. For workers, their purchasing power will quickly erode. Anyone who managed to land a better job with better pay, will soon find their purchasing power reduced to what it was before, or worse. And for those who waited too long to find work, they will suddenly find themselves in a desperate situation as their free money runs out and businesses that would hire them before are closed because they couldn't find workers before the stagflation hit.

In response, to high inflation, central banks tend to increase interest rates and governments raise taxes. The goal is to reduce the money supply so the dollar's value stops falling. When dollars become more rare, they hold their value better. Conversely, high unemployment tempts governments to issue easy money to those at the bottom. It's smart because large, unemployed, hungry masses tend to become mobs. And if mobs become organized, they can topple governments. Hence, the bread and circuses.

Normally, high inflation is fixed by raising interest rates, and often taxes. This removes money from the economy, where it is effectively destroyed, thus reducing the money supply and making dollars rarer. This helps money to hold its value (purchasing power). But when dollars increase in value, people tend to hold them instead of spending them, especially businesses. That means less hiring, fewer pay raises, and in many cases, layoffs.

High unemployment is addressed through cutting interest rates and taxes, and even issuing economic stimulus in an emergency. This makes dollars more plentiful, or "cheaper," easier to spend. The spending leads to expansion, which includes more hiring and more pay.

But stagflation combines the worst of both worlds. Raising rates and taxes will reduce employment when unemployment is already high. And stimulus causes more inflation. Stagflation isn't easily addressed with either strategy.

There are possible solutions. The first is to manage inflation, which can spiral out of control and collapse entire economies. People tend to find ways to feed and house themselves regardless, but there is little they can do when prices rise faster than their wages can sustain them. Therefore, the Federal Reserve will need to raise interest rates, and quickly. However, they may hold off on taxing business more, since businesses need to be hiring. Even popular tax villains like Amazon and Wal Mart, will need a pass. That won't sit well politically, but it's the bitter medicine that will work.

In more extreme situations, price controls and a cap on wage increases could be considered, on an emergency basis. Although these are far less preferable to natural market corrections. It is much better for the natural laws of supply and demand to correct economic problems. However, people need to eat and survive in the meantime, and governments have a duty to facilitate human survival and wellbeing.

But a caveat! If governments continue to issue stimulus checks, refuse to raise interest rates, while taxing businesses, the situation could rapidly become worse. None of the steps that need to be taken will be popular with the people. However, if people think giving Amazon et. al. a tax break and cutting off stimulus money is bad, wait until they see full-blown economic collapse.