No, you don't want socialism. You want justice.

A genuine problem in America is the lack of education, especially on the topics of politics and economics. The result is a widespread condition of ignorance where most people duel over words whose meanings they misunderstand. 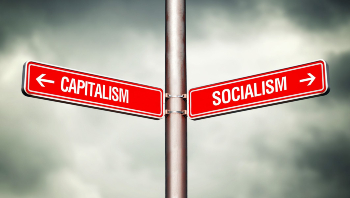 LOS ANGELES, CA (California Network) - One easy way to determine if arguing with someone over politics and economics is to ask them to define some basic terms. If they can define capitalism, socialism, or explain what a republic is, then by all means proceed. Otherwise, you are wasting your time.

Why do so few Americans understand capitalism and socialism? Why is the topic so divisive? Why are so many young people infatuated with socialism, and who's to blame?

The heart of the problem is a lack of education. In California, seniors in high school have only to take half-a-year of government and economics before deemed fit to graduate. As a result, teachers have little time to explain these concepts in detail. It doesn't help that teenagers about to graduate high school have many other interests besides politics and economics, or that their own teachers are poorly informed.

The problem is made worse by the media and the wealthy who loudly proclaim anything that is not raw, unadulterated capitalism as socialism. Meanwhile, the multitude of working poor, now joined by the middle class whose condition is becoming evermore precarious by the month, are calling for socialism. And why shouldn't they? These people confuse socialism for one simple thing, justice.

What are these things really?

Capitalism is best defined thus: corporations have a fiduciary responsibility to generate profits, to pass those profits to shareholders, who can trade their shares.

Unpacking that definition takes some work. Corporations are private entities, so everything they own is by definition "private property." When Marxists refer to private property, they mean the private ownership of the means of production (think: the factory). They do not mean your toothbrush, which is defined as "personal property."

Fiduciary responsibility means the highest duty a corporation has. However, it should be noted this is not an actual responsibility under the law. Nonetheless, corporations often behave as though it is, since they chiefly exist to generate profits.

A final item to unpack is the trading of shares, which means there must be a stock market. People can buy shares and get paid dividends without working. Such people who generate income from rents and dividends are called rentiers.

Socialism is this: the workers own and control the means of production.

It isn't the Soviet Union, Venezuela, or anything else people THINK it is. It's defenders are correct to say it has "never been tried" in the real world. Although it has been attempted on the small scale and can work on the microscale for a limited time, it typically fails. This is because socialism is utopian and impractical. Ideas like the command economy just don't work because market forces naturally undermine them. And of course, revolutions can be betrayed and socialist utopias quickly turn into dictatorships, a condition known as authoritarianism, or authoritarian communism, or even state capitalism. None of these conditions are happy or desirable. They are not only authoritarian, but they are often also atheistic.

Both of these ideas are different from democratic socialism, which is fundamentally capitalist, but relies on heavy taxation to sustain a large welfare state, for better or worse.

Capitalism is given to excess, which is a major problem. Greed takes hold and the goods of the earth are reserved by a few rather than being stewarded for the benefit of the common good. When these conditions become apparent, such as when workers are paid so little they cannot afford a decent living, when the environment is destroyed for profit, people cry for justice.

Therein lies the problem. The people confuse socialism for justice.

The consequences of getting this wrong can be seen in dozens of nations around the world, with devastating results.

Ethical capitalism, informed by Catholic Social Teaching is the best way to organize an economy. But if we want to avoid the consequences of millions of youth enamored with the dangerous ideology of socialism, then we need to deliver education AND economic justice.