Poverty is rising again, and it's time for a program to help struggling Americans

Poverty is on the rise in the United States, a result of COVID lockdowns and the closures of businesses. While stimulus helped hundreds of millions of people, the end of the supplemental aid has between six and eight million people struggling to survive. One in eight Americans already lived below the poverty line in 2018. 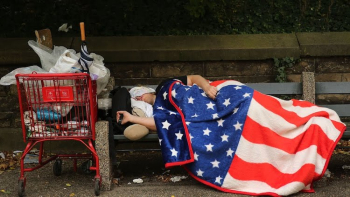 LOS ANGELES, CA (California Network) - Two new studies from Notre Dame and Columbia University respectively, reveal between six to eight million Americans have slipped into poverty following the start of the COVID crisis in America and the end of financial aid.

The number of poor in America is skyrocketing towards 45 million souls as the COVID crisis keeps many places locked down. Without schools open to occupy children during the day, and many public venues shuttered, millions of Americans remain unable to return to work, or unemployed.

Although lockdowns are easing across the United States and unemployment figures show people are returning to work, permanent damage has occurred. Many people no longer have jobs to which they can return. Small businesses have suffered the most, unable to keep up rent payments or move inventory. As Americans run out of money to spend, even those businesses that can open are seeing declining sales.

There are some firms which are doing well, most notably Amazon with more than 6 billion in profits, well more than double last year's figures. Wall Street continues to do well, although the market fluctuates with the news. But even when stocks drop, many large firms remain in good shape. Larger firms have been able to capitalize on bailouts. They've also downsized and adapted quickly to changes in the economy. Smaller firms have not been so fortunate.

All these problems are increasing poverty in the United States.

The best solution to this problem is to put people back to work. That will happen as lockdowns end and COVID cases abate. But exactly when that will happen is subject to speculation. Many countries that did well in the fight against COVID and have "open" economies, are seeing a rapid rise in cases as winter approaches. Winter is cold and flu season in the Northern Hemisphere, and as more people crowd together indoors, COVID cases are likely to increase.

It is likely that many places which have reopened will soon shut down again as cases return. It is normal for pandemics to strike in waves. The waves are caused by early openings, which are often driven by people whose economic situation is harmed by lockdown measures. Social distance is also economic distance. When faced with the possibility of being sick for a week or more and losing a hard-built business, most people are willing to risk their health.

Reopening can be safely done with masks, social distancing, and handwashing. Vulnerable persons need to remain sequestered. But most others can and probably should return to work with precautions. That would aid in the fight against unemployment and poverty.

However, until a vaccine is developed, distributed, and can provide herd immunity, COVID will impact the economy and our quality of life.

Meanwhile, going back to work isn't the only component of the solution. As Americans return to work, incentives to spend must also be created. That means the government should issue stimulus to households. There should be no means testing, since only a few earners are excluded based on income anyway. And the purpose of the payments isn't merely to help the poor, but to stimulate spending so businesses can reopen. A business cannot serve customers who lack money to spend. Stimulus spent to dine out or take a vacation is just as effective as stimulus spent to pay rent. In fact, stimulus spent in small businesses greatly increases the velocity of money in an economy as the dollars pass through more hands on their way back to the bank.

So far, stimulus remains a point of contention in the legislature. Democrats want to pass a massive stimulus bill in the amount of $2.2 trillion. Republicans want to spend less than a quarter of that amount. Recently, Republicans have signaled they would accept a compromise of $1.8 trillion. Democrats are thus far refusing to accept the offer. It's typical election-year politics, but the American people are suffering.

No matter what, the fight against poverty will require short-term stimulus to put money into people's hands which they can use to keep businesses afloat.

But without direct fiscal stimulus to households, and without workplaces cleared to repoen, we can and should expect poverty to grow along with crime, violence, and chronic problems for children and the vulnerable members of our society.