Tesla Model 3 may fall short of forecasts, but it will still change the world

The Tesla Model 3 is a game changer for the auto industry. It is a reasonably priced, well-designed electric car that looks good. It has nearly half-a-million pre-orders. It's slated to begin production this year. But will it live up to the hype? Possibly not, according to Morgan Stanley. 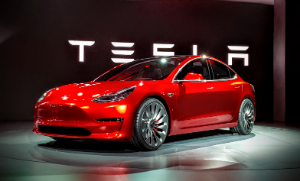 The Tesla Model 3 is the Model T Ford of electric cars.

LOS ANGELES, CA (California Network) -- The Tesla is a status symbol. Self-driving, electric, and elegant, the car accelerates with power and precision. It's a hot item, but every expensive. It's also not a major money maker for Tesla. To generate greater revenues, Tesla needed to design and build a model that is more affordable. Enter the Model 3. It's smaller and less flashy, but it still comes with the Tesla label, some sweet standard features, and is all electric.

The car's most compelling motivator could be its price. It is just $35,000. While compact cars can still be had new for less than half that price, the Model 3 offers a reasonably priced upgrade. Many people are spending more money on conventional cars.

Tesla claims it has over 400,000 pre-orders for the Model 3. It will begin production his year with the first models delivered at the end of the year. Tesla has said there would be 20,000 produced before the end of 2017.

But Morgan Stanley has a different opinion. "Our forecasts are much more conservative than the company's forecast both this year and next. We expect this vehicle to go into a kind of soft launch mode into the fourth quarter this year and our forecast is for 2,000, not 20,000, not tens of thousands...delivered at the end of this year. The point of this is just to have those initial deliveries done to get the data and the initial feedback from the community. Next year, we're at about 80,000 units. Yes, they've talked about 400,000...that kind of pace of production. We are nowhere near that. Even if you go out a few more years to 2020, our numbers are less than half, maybe a third of what management is implying that they can do. In spite of that, we are constructive on the investment."

In other words, Morgan Stanley believes production figures will be well below predicted numbers. This will delay delivery of the Model 3. The cost of the vehicle will also be an issue. The much touted $35,000 price tag is a base price, and upgrades will cost more, up to $65,000.

These issues will result in cancellations and cause revenues to fall short of projections.

But this is just the beginning for Tesla, and while there are sure to be growing pains, the electric car appears here to stay. And newer models will come out more quickly and from more competitors.

Americans want electric cars, and we are capable of producing cheap electricity, which will eventually replace gasoline in the decades to come. Electric charging stations are cropping up around the world, and people will be able to charge their cars in their garages, which is a significant incentive.

Gas stations and other places like electric charging stations because they take longer than gasoline fill-ups, which means customers are more likely to spend money at their stores.

It is only a short matter of time before other manufacturers catch up to Tesla. Whether Tesla hits its projections or not, electric cars are here to stay.