During his conversation with journalists on his flight back to Rome from his recent pastoral visit to Bahrain, Pope Francis shared his thoughts on many of the world's current human-made tragedies -- including today's numerous armed conflicts which reminded him of the World War II Allied military landings at Normandy, France. 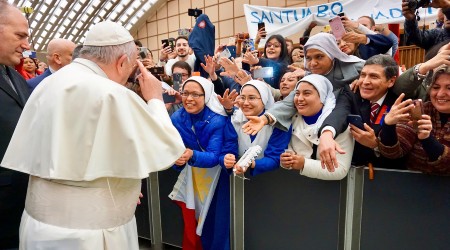 Photo by Barbara Provenzano on Unsplash

He said, "It was the beginning of the fall of Nazism, it's true. But how many boys were left on the beaches in Normandy? They say, 30,000. ... Who thinks of those boys? War sows all of this. That is why you, who are journalists, please be pacifists, speak out against wars, fight against war. I ask you as a brother. Thank you."

Pope Francis' heartfelt request to journalists to be pacifists touched my heart.

Many years ago, as a young man, I found myself in U.S. military basic combat training at Fort Dix, New Jersey.

While firing my M-16 weapon at life-like pop-up targets, it occurred to me the army was not training me to hit targets, but instead to kill some poor guy like me in a far-off country who got caught up in the propaganda of his own country's war machine.

I came to fully realize this was all wrong. And I knew that in my desire to imitate the nonviolent Jesus, I could kill no one.

I spoke to my drill sergeant about my deep anti-war feelings, and my desire to apply for conscientious objector status. He urged me to wait until I completed basic combat training and apply for CO status when I arrived at Fort Benjamin Harrison, Indianapolis for Advanced Individual Training.

At Fort Harrison, I was previously trained as a journalist and was receiving additional training as a broadcaster for Armed Forces Radio in Germany. But that exciting future did not deter me from seeking CO status. My broadcast instructors tried to convince me that the chances of my having to shoot someone from a radio station were extremely remote. However, I knew my role as a military journalist and radio disc jockey would be to boost the morale of those who would be pulling the triggers and dropping the bombs. And I knew that I could have nothing to do with this unholy enterprise.

Although the Holy Father's inflight press conference plea, "You who are journalists, please be pacifists, speak out against wars, fight against war," was on that occasion directed to journalists, it is reasonable to believe that his pacifism plea is also extended to all people of good will.

And it is important to clarify that pacifism does not mean lying down and allowing brutal aggressors to kill and destroy. Quite the contrary! Pacifism, or the preferred terms "nonviolent resistance" and "active nonviolence" is courageously committed to using the numerous nonviolent, highly effective tools available to limit and even stop armed aggression. For example, please see Pax Christi International's Catholic Nonviolence Initiative   and The Nonviolent Peaceforce.

The late preeminent theologian and biblical scholar, Fr. John McKenzie said, "If Jesus does not reject violence for any reason, we do not know anything about Jesus. Jesus taught us not how to kill but how to die."

On Sept. 7, 2013, countless believers across the globe, and over 100,000 people in St. Peter's Square, prayed with Pope Francis for peace in Syria and throughout the world.

During the four-hour prayer service at St. Peter's, the Holy Father said "We bring about the rebirth of Cain in every act of violence and in every war. ... We have perfected our weapons, [while] our conscience has fallen asleep, and we have sharpened our ideas to justify ourselves. As if it were normal, we continue to sow destruction, pain, death! Violence and war lead only to death, they speak of death! Violence and war are the language of death."