Awake! We are sleepwalking toward nuclear war!

Sixty years ago, in October 1962, for 13 highly frightful days, the Soviet Union and the United States militarily stood toe-to-toe over the Soviet Union's installation of nuclear missiles in Cuba -- just 90 miles from Florida -- and the United States' subsequent naval blockade around that nation island. This confrontation, which came to be known as the Cuban Missile Crisis, was as close as the world has ever come to nuclear war -- until now! 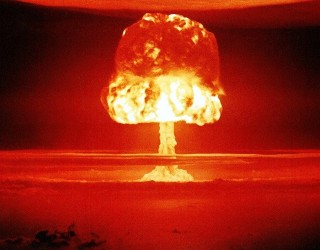 In response to Russian President Vladimir Putin's increasingly alarming threats to use nuclear weapons in his war with Ukraine, U.S. President Joe Biden warned that if Putin uses a tactical nuclear weapon, which is a highly explosive "battlefield" nuclear weapon, that the world could face "Armageddon."

With added ominous emphasis, Biden said, "I don't think there's any such thing as the ability to easily (use) a tactical nuclear weapon and not end up with Armageddon."

Retired four-star U.S. army general David Petraeus, on U.S. national television, ominously warned that if Russia uses nuclear weapons, "Just to give you a hypothetical, we would respond by leading a NATO -- a collective -- effort that would take out every Russian conventional force that we can see and identify in the battlefield in Ukraine and also in Crimea and every ship in the Black Sea."

In the event that this very possible scenario, or anything like it, happens, it's reasonable to conclude that it would quickly develop into a full-blown nuclear war.

With Putin threatening to use nuclear weapons, the U.S. and its NATO allies are planning how they will militarily respond to a nuclear attack by Russia upon Ukrainian forces. The unthinkable -- nuclear war -- is being planned! And this of course begs the question: "Why the silence? Why for the sake of God's precious children and God's green earth, are we not demanding a dramatic change of course away from the accelerating trajectory toward the insanity of "Mutually Assured Destruction" -- appropriately known as "MAD"?

In an article titled "Thinking About the Unthinkable in Ukraine -- What Happens if Putin Goes Nuclear?" Richard K. Betts, professor of War and Peace Studies at Columbia University, chillingly states: "The most prevalent notion is an eye-for-an-eye nuclear counterattack destroying Russian targets comparable to the ones the original Russian attack had hit. This is the option that occurs intuitively, but it is unattractive because it invites slow-motion exchanges in which neither side gives up and both ultimately end up devastated" (see: https://fam.ag/3V5zG8t).

I strongly recommend that all adults and teenagers (not children) watch the still highly relevant, chilling 1983 movie "The Day After" which realistically portrays how an escalating set of events could quickly lead to an all-out thermonuclear war, with its horrific aftermath (link to movie: https://bit.ly/3ijEy8v).

Everyone throughout the world, needs to urge President Biden to act in the spirit and example of Jesus -- to be a nonviolent peacemaker as his, and our, Catholic faith teaches.

And please contact your national government representatives, asking them to contact Presidents Biden and Putin with the urgent appeal to back away from the nuclear precipice, declaring an immediate cease-fire and to fully commit to a negotiated peace agreement.

And most of all, let us storm heaven with our personal, liturgical, diocesan and global prayers!

In the days leading up to President Putin's decision to order invading Russian troops into Ukraine, Pope Francis, in an apparent effort to jolt the conscience of the Russian leader, as well as the consciences of all of us, made this appeal: "Let us not forget: war is madness." And he lamented, "Those who wage war forget humanity. How sad it is when persons and peoples think about waging war against each other."

To all this madness the Holy Father boldly declared, "Put down your weapons! God is with the peacemakers, not with those who use violence" (see: https://bit.ly/3Kb7zP0).