Memorial Day in the U.S. - the last Monday in May - is a time when Americans honor U.S. combatants killed in wars. It is a day of intense nationalism with lots of flag waving accompanied with a perceived need for military strength - even superiority. 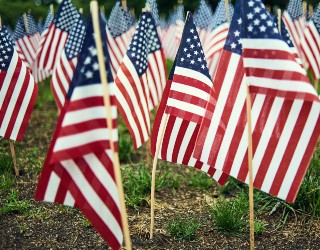 Photo by Valentino Funghi on Unsplash

But with more than 1 million Americans who have lost their lives fighting in America's many wars, isn't it about time for Christians to finally put an end to militarized nationalism which accepts ongoing war as "normal," and instead make the time around Memorial Day an opportunity for prayer and reflection on how to become modern-day peacemakers in the spirit of the nonviolent Jesus?

The healthiest, holiest way to honor combatants killed, is to stop sending new combatants to take their place - to kill and be killed - again and again!

Since 9/11 approximately 7,000 U.S. troops have lost their lives in Afghanistan, Iraq, Syria and Pakistan; with well over 50,000 wounded - many seriously. And about 7,000 U.S. military contractors have also been killed.

Thousands of U.S. combat personnel have returned from war zones in Iraq and Afghanistan with serious brain diseases linked to open-air "burn pits" - where all trash is burned. This highly toxic soup, including plastics of all sorts, pollutes the air breathed by U.S. troops and many native children, women and men. And yet, the U.S. Department of Veterans Affairs has made it extremely difficult for many veterans to obtain proper treatment (see: https://to.pbs.org/3bZ5837).

And let us not dare forget the number of innocent civilians killed in these conflicts - conservatively well over 1 million deaths (see: "Costs of War" video: http://watson.brown.edu/costsofwar/).

The U.S. has approximately 800 military bases in about 80 countries - far more than any other country (see: https://bit.ly/2QU0Z9s).

And that's not all.

There are approximately 70,000 U.S. Special Operation forces - including Navy SEALs and Army Green Berets - operating in 149 countries. That's a deployment of combat personnel to more countries than any nation has ever sent military personnel to. Ever! (see: https://bit.ly/2ABnQJG).

Hellishly, the war machine keeps rolling along grinding up countless human beings. And for what?  Well, for two things for sure: the age-old sins of love of power and money.

Flexing their muscles, nations spend an astronomical $1.7 trillion annually on their militaries (see: https://bit.ly/2rg4XsQ), while in comparison very little is spent on ending global ills like hunger, poverty and homeless.

The U.S. is the largest exporter of weapons of war, followed by Russia, France, Germany, China and the U.K.

Of the six companies worldwide that profit the most from weapons sales, one is British (BAE Systems), and five are American - General Dynamics, Northrop Grumman, Raytheon, Boeing, with Lockheed Martin being the world's largest arms dealer selling over $40 billion worth of weapons in 2016 (see: https://bit.ly/2I6EHM2).

In the Second Vatican Council's document "Gaudium et Spes" (Pastoral Constitution on the Church in the Modern World) the world's Catholic bishops declared and warned, "Therefore, we say it again: the arms race is an utterly treacherous trap for humanity, and one which ensnares the poor to an intolerable degree. It is much to be feared that if this race persists, it will eventually spawn all the lethal ruin whose path it is now making ready" (see: https://bit.ly/3yIQsio).