Wake Up Slumbering Souls! Wake up!

Free World Class Education
FREE Catholic Classes
We are all guilty of inattention, indifference and irreverence toward the God Who lives among us and wishes to live within us!

The sad reality of our times is that so very few of us love God as we ought and as He deserves. For the most part, He remains abandoned and ignored as a prisoner in the tabernacles of His Churches.


It is my hope that by sharing the Introduction from my most recent book, Stirring Slumbering Souls - 250 Eucharistic Reflections, hearts will be changed and more of us will re-discover and treasure a greater reverence and appreciation for the Gift of our Lord's Presence here among us. 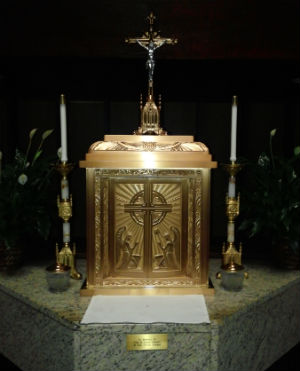 By Michael Seagriff
Harvesting The Fruits of Contemplation (https://harvestingthefruitsofcontemplation.blogspot.com/)
12/5/2018 (3 years ago)

Have you ever loved someone so much that you could hardly wait to hear from them, speak with them and see them? How often have you looked forward to a visit from someone you deeply love only to have that person not come? How hurt have you felt when you were ignored and your love not returned?

Imagine then how God - Who is Love - Who loves us more than words can describe - feels when we fail to demonstrate our love for Him. He waits, hour after hour in our churches, behind locked tabernacle doors, as a Prisoner of Love, just to hear our voices and see our faces.

Few of us come to be with Him. Many no longer believe He is really and substantially present in the Sacred Eucharist. For all practical purposes, He is abandoned, ignored and disrespected.

This despite the fact: that God the Father on Mount Tabor commanded Peter, James, John and all who would later hear of Jesus' Transfiguration to listen to His Son.; that Jesus Himself later scolded the same three apostles for their failure to watch one hour with Him; and that His Blessed Mother directed the servants at Cana and all who would later learn of this miracle to do whatever Jesus tells them.

We have taken God for granted. We have failed to love our Lord as we ought and as He deserves. Despite our deafness and disobedience, Jesus never gives up on us.

From time to time, He prompts others to 'shake things up'. This book attempts to do just that.As you read and ponder the content of this book, may you recognize, as Father Bruno Shah, O.P. has suggested to me, two distinct voices - 'the prophet calling Israel back to fidelity' and 'the sweet Mother inviting us to trust in Her Son'.

In Matthew's Gospel (8:23-34) the evangelist tells us that when Jesus crossed over from Galilee into the mostly Gentile area of the Gadarenes. He and His disciples approached a field where a large herd of swine were feeding. There Jesus encountered two demon-possessed men who made travel on this particular road impossible.

The demons within these men immediately recognized Jesus as the Son of God. It had to be excruciatingly painful for these evil spirits to remain in His Presence. They begged Jesus to send them into the nearby herd of swine.

'Out with you!' Jesus commanded. They entered the swine and the entire herd ran down the bluff and into the sea where they drowned.

At this sight, the swine's caretakers (herdsmen), not knowing who Jesus was or understanding what they had just witnessed, fled the area and informed their fellow townspeople what they had seen. Matthew tells us that everyone in the town later came back to meet Jesus.

They came. They saw Jesus. But did they actually meet Him?

The townsfolk had to have seen the formerly possessed men now normal in appearance and behavior. One would think they would be full of gratitude for their restoration, to be rid of these evil spirits and to be able to travel freely on the road without fear or impediment. Surely, if they really wanted to meet and thank this Man, they would spend time in His presence, talking with and listening to Him. They had to have a multitude of questions: Who was He? From whence came His power to cast out demons? Why did He come to their town?  - and so on and on.

The Son of God was in their midst! He came there intentionally. Although they were Gentiles, He was ready to welcome them into His loving embrace. He who had cast out demons was ready to transform them. They failed to recognize Who He was and how blessed they were to be in His Presence. They showed Him no appreciation, reverence or respect. They asked no questions. They sought no relationship with Him.

Instead, they let fear take root and snuff out the offer of faith and salvation standing at their feet. Through their actions and words, they did the unthinkable - they told Him, the Second Person of the Blessed Trinity, the Savior of mankind, the Son of God, that He was not welcome in their town, their hearts or their souls. They begged God to leave!

He left. God would never interfere with anyone's free will no matter the pain their poor choices caused His Most Sacred and Merciful Heart.

How tragic! Jesus was right there, in their midst, seeking a relationship with each of them. They were not interested!

But let's not be too quick to condemn or cast stones at these blind souls.

Have not many of us treated Jesus in a similar manner as did the Gadarenes - not taking the time to meet, talk and listen to Him? Are we just as reluctant to seek a relationship with Him, as were they? How many of us act like Jesus is not really, truly and substantially present here with us in the Eucharist?  Do we act irreverently toward Him? Do we ignore Him, content to abandon Him to His tabernacle-prison?

If we do go to Church are we anxious to get out as quickly as we can? Do we spend time expressing our gratitude for the Gift of His Presence? Do we prepare ourselves properly to receive His Body, Blood, Soul and Divinity and with the awe, amazement, and gratitude such a Gift deserves?

How many of us ever come back to visit and talk to Him during the week? When is the last time we spent time in His Presence, just sitting there silently, basking in the invisible but ever-present graces flowing from behind the locked tabernacle doors or from the Sacred and Most Precious monstrance in which He hides Himself humbly behind the Consecrated Host?

The truth is that we are all guilty of inattention, indifference and irreverence toward the God Who lives among us and wishes to live within us.

To have the Son of God here with us and not to spend time with Him is the same as telling Him that we are not interested in getting to know or have an intimate relationship with Him and that He is not welcome in our minds, hearts or souls. Like the Gadarenes, we are telling the Son of God we do not want Him in, or to interfere with, our lives. We are telling God we are not interested - to leave.

When we act this way, are we not just like the nine lepers who were healed but never returned to thank Jesus?

Is not our lack of belief, indifference, irreverence, ingratitude and neglect of our Lord a far more violent affront to His Most Precious, Sacred, and Mystical Heart than was the physical lance the Roman centurion Longinus thrust into His lifeless side?

As the undeserving beneficiaries of God's forgiveness, mercy, and love, how have we expressed our gratitude to Him? There are 168 hours in each week. Certainly, we can find some time to be in His Presence, adore Him, talk to Him, listen to Him, and make reparation to Him for the countless indignities and blasphemies He endures.

We just have to love God enough to gift our time to Him.

May our loving and waiting Lord use the 250 quotations in this book to increase belief in, reverence for, devotion to and love of His Eucharistic Presence, touch lukewarm hearts, stir slumbering souls, and re-ignite the flame of love for Him that He placed in our hearts the second He breathed life into them.

Listen to Him speak as you read and ponder these truths. Take a close look at yourself. Recognize the many ways in which you offend Him daily. Feel His pain and anguish over being abandoned and ignored and treated irreverently. Understand how thirsty He is for your love.

Then love and treat Him as He deserves.

'The cure for all the spiritual cancer and evils in the world is Jesus Christ and His wonderful Presence in the Blessed Sacrament...We all need Eucharistic Adoration in our lives if we ever hope to make it safely into the harbor of Heaven."' (Father Daniel Doctor)

My blog where I promote zeal for the salvation of souls, awe and amazement for the Holy Eucharist and Eucharistic Adoration, and fidelity to the Truths of our Catholic Faith.