I Kissed His Feet 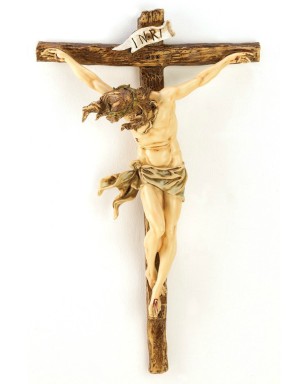 By Michael Seagriff
Harvesting the Fruits of contemplation (harvestingthefruitsofcontemplation.blogspot.com/)
1/4/2017 (4 years ago)

CANASTOTA, NY - I have tried from time to time to obey Him. But I have found it hard to do. Painful would be more accurate. I don't want to be reminded of the price He paid for my sins. I don't want to acknowledge how ungrateful I have been for such an undeserved sacrificial gift. I am afraid of what other things He might ask of this obstinate sinner and of the additional disappointment, pain and anguish my refusing to change may cause such a loving and merciful Lord.

Yet, if I am ever to succeed in abandoning my will for His, of allowing Him to make of me the new creation He intended, and of spending eternity in His glorious and magnificent Presence, I must obey.  I must daily walk that road and spend time at the foot of His cross.

I am hopeful that as a result of my recent visit to St. Joseph's Oratory in Montreal, the work of Saint Andrew Bessett, more commonly known as Brother Andre, I will be successful in this most difficult but necessary exercise.

Let me tell you why.

Shortly after arriving at the Oratory and during a casual conversation at lunch with other pilgrims, I heard, for the first time, of a Crucifix in the Grotto Church at the Oratory to which a great devotion had developed. Over the years, many answered prayers and miracles have been reported by those who spent time at the foot of that Cross and who left their written prayers and petitions there.

I wanted to find that special place.

I had never been to the Oratory but went to look for that Crucifix. I had not walked very far at all when I saw the Grotto's entrance just feet from where I stood.

I entered with joyful expectation. Mass was about to begin but there was still a line down the side aisle in front of a Crucifix that was in the sanctuary next to the altar rail.

My wife and I got on the line. At first I was unsure whether I was disrespecting our Lord and the priest who had just begun Mass but felt compelled to remain in the line, joining in the hymns and Mass responses. I was moved by the depth of emotion others displayed as they approached the Crucifix and held on to our Lord's nailed feet while praying silently.

When it was my turn, I snapped a quick picture of the crucifix and then reached up and put my two hands on Jesus' crucified feet. I rested my head there as well, pleading for the salvation of my soul and the souls of my loved ones. I shed a few tears. I did not want to leave or remove my hands but knew I had to do so. Others were waiting.

I kissed those nailed and blood-stained feet. Suddenly I was filled with a brief tingling sensation - a powerful awareness of God's Presence and of His undying love for me.

And then it struck me.

I had finally come to the foot of the cross. Now I understood why Jesus so persistently invites us there and why I owe Him and myself total obedience to His invitation in the future.

May I not disappoint Him.

A blog through which I promote zeal for the salvation of souls, awe and amazement for the Holy Eucharist and Eucharistic Adoration, and fidelity to the Truths of our Catholic Faith.