Mauricio Kuri, Youthful actor in 'For Greater Glory,' Talks About the Film and His Faith

Few know the incredible story regarding the last major uprising in North America:  the Cristero War in Mexico that just a few decades ago secured greater religious freedom for millions.  Though fought for only three years, this roiling civil war left thousands of people dead on both sides. 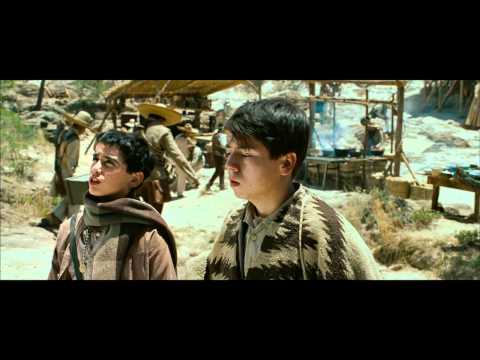 WASHINGTON, DC (Catholic Online) - Until stories about the new movie, "For Greater Glory," started showing up online and in print, very few of us had ever even heard of Cristiada, also called the Cristero War, in Mexico during the 1920's. Now, not only has the war become a popular topic of discussion, but also parallels are being explored comparing early 20th Century Mexico and the United States of today by many.

The Cristero War was about religious freedom - especially for Catholics - when Mexico's newly elected President, Plutarco Calles, began aggressively restricted public religious practices in 1926. By the end, three years later, historians say that as many as 250,000 citizens and soldiers were either executed by the government or killed in battle.

Dean Wright, who is best known as a Hollywood effects specialist for such blockbusters as TITANIC, THE LORD OF THE RINGS trilogy and CHRONICLES OF NARNIA, directed the movie.

One special youthful actor in the film is Mauricio Kuri. The fourteen year-old Kuri, born and raised in Mexico City, is appearing in his first major motion picture. I had a chance to talk with Mauricio recently and found him to be a down-to-earth young man with a dream for acting and a heart for Christ.

In preparing for his part, Mauricio became intrigued with the character he was playing. José Luis Sanchez was a 13 year-old Cristero volunteer who was executed for refusing to renounce his faith.

"I studied a lot of that character, Kuri shared, "because he actually existed. There's a biography of him. He gave his life for Christ and I think that's the most important thing to me - to defend your ideals, to defend your religious freedom and your faith."

Playing a real life martyr who died at about the same age had a real impact on this emerging actor.

"I'm Catholic and it (being in this film) drew me closer to my religion. I read the story about Jose and I asked myself  'If we were in those times right now would I do the same thing that Jose did for his faith?' And you know, I think I wouldn't and that's really sad.

"I called a Father - we are really close - and he started talking to me about my faith and the Bible. He was like a guide to me, a spiritual guide. He also took me to a town in Mexico to help people in need. It was amazing; I wanted to be Jose, I wanted to be like a Cristero but now a days."

Sharing with him that being a modern-day Cristero seemed like an interesting goal for someone, I asked what that would look like.

"We can be Cristeros right now. not just to grab your gun and your sombrero," he said with a small laugh, "But to defend your faith. To say 'I'm Catholic and I'm proud of it. And if you don't know what Catholicism is, I can teach you. I can tell you about Jesus and tell you about José.' To live your life the way Jesus wants to live it. "

How refreshing to hear that kind of spiritual passion out of a teenager. I hoped out loud that the film would have a similar impact on others his age. So what would this aspiring actor want to say to those in their early teens?

"If they're going to watch the movie," he replied, "and I hope so because it's a really cool story. If you are going to watch it, you must see Jose's character and get involved in the feeling of all his torture because he is a martyr. Then be like him nowadays.

"In one of the scenes they took out of the film - I hope you can see it in the deleted scenes when the DVD comes out - I am writing a letter to my mom in the jail cell, saying goodbye to her; and I'm telling her to tell my brothers to follow the example of the youngest boy. That's the key of everything because he was a little boy and he did more than his parents and his brothers. He was an illuminated guy."

During the filming, Mauricio had the opportunity to work with some amazing actors, like Andy Garcia and Peter O'Toole. I asked him what that was like.

And for the future, do you hope to keep acting?

"I want to continue acting. That is my dream. If the people from here, from the United States, like the movie - if they call me for another project, I would be pleased to participate."

What a blessing for this young guy to find himself in an international release of a movie as his first major excursion into feature films.

"It's a great blessing and unexplainable; I never studied acting before the movie. It helped me a lot, like I said, to improve my faith and to thank God every day for what He has done for me. He has done a lot for me and I owe Him everything."

Mauricio Kuri seems to be a youthful actor who has his priorities straight and his heart fixed in the right direction. I believe it is possible for him to have a successful career and maintain this perspective; it will be hard but truly worth it.

Shooting on historic locations throughout Mexico, "For Greater Glory" opens in U.S. theaters on June 1. For more information, you can visit the films official website.