'The Way' Takes Us On a Life-changing Journey - An Interview

"The Way" is a powerful and inspirational story about family, friends, and the challenges we face while navigating this ever-changing and complicated world. Martin Sheen plays Tom, an American doctor who comes to St. Jean Pied de Port, France to collect the remains of his adult son (played by Emilio Estevez), killed in the Pyrenees in a storm while walking the Camino de Santiago - The Way of Saint James. 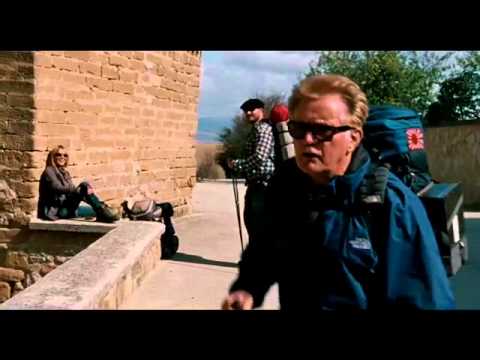 BOSTON, MA (Catholic Media Review) - [Editor's note] Leticia Velasquez had the opportunity of talking with Emilio Estevez about his new movie "The Way." Starring his father, Martin Sheen, Estevez wrote, directed and acted in the film, which is getting a lot of attention for his poignant story.

Velasquez: My fans are very enthusiastic that they are going to hear from you and hear your side of the story behind "The Way."

Velasquez: Would you tell us about your own personal faith journey?

Estevez: I grew up in a house, where, as a boy, we lived in New York City for six years, my mother was raised Southern Baptist, and my father was a devout Catholic. And, as a boy, I heard nothing but arguments about religion, and it was very, very confusing to me, and, as a result it left a very distasteful feeling for me. Where I finally ended up, is that all of the children were Baptized, but we were not practicing Catholics, in fact, my father fell away from the Church for quite some time, and then came back in 1981, there was a reconversion. So, for me, this has been a long journey, my mother likes to call me a work in progress. And I am that, and I think the film is a reflection of my spiritual journey. Its often said that the proof is in the pudding, but I like to say that its in the eating of the pudding. And if you've seen the film then its pretty clear where I'm at in my spiritual path.

Velasquez: How does the Camino de Santiago figure into your personal story? I understand you've walked it.

Estevez: We spent a lot of time on it; my son lives in Spain. He was traveling to Spain with my father in 2003. And they stopped on the Camino in a town called Burgos. And my son met a gal, and fell in love, and he married her years later. He's been married about 8 ˝ years. So I obviously have a close connection to Spain through my son. But also through my grandfather; he was from the North of Spain, from Galicia. And I dedicate the film to my grandfather, Francisco, whose presence I felt every day, every step of the way, not only through the planning of the film, and in the shooting of it, and obviously as we're continuing our American pilgrimage now, the spirit of my grandfather is very strong in my life.

Velasquez: I remember your father sharing how it was very moving to him when he saw the dedication to your grandfather for the first time at the screening. So what do you hope that your audience takes away from "The Way?"

Estevez: We live in a very interesting time. Our culture, and especially the media, whether its mainstream or commercial media, the message they're sending every day is "take this pill, you'll be happier" or "go on this diet, you'll be thinner and happier", "go visit this plastic surgeon, change the way you look and it will change your life", "have your teeth whitened and people will love you more." And it's really a bunch of nonsense, because all the things you do which are outward will, I believe, really change you. The change comes from within. And I think the theme of the film is "how about we are OK with being exactly who we are, and we don't try to change ourselves so that other people love us more. That we are all wonderfully imperfect; that is our common bond. Our wonderful imperfections; we're these beautiful, gorgeous messes. All of us, myself included, right? And that is really what bonds us.

Velasquez: You described several miracles, which took place during the filming?

Estevez: That's right, first of all, the miracle that the movie got done in the first place. When you look at pictures that are driven by CGI (Computer Generated Images) vulgarity, violence, overt sexuality, its hard to get your message across if it's a gentle, that's about people and about relationships, so that was the first miracle, that we actually got this picture completed.

But we were warned against shooting in the north of Spain at the time when we were shooting. They said, "Its going to rain every day" and "you're never going to make your 40 day schedule". So, we went out there anyway, and we started rolling. It rained twice, and both days we were filming indoors, doing indoor scenes. It was definitely a blessed shoot!

There was also the miracle of getting access to the cathedral. We were not allowed in, up until 48 hours before we were to film in the cathedral. (Cathedral of Santiago de Campostella) I had the entire crew lighting candles, getting involved with their intentions to allow filming, because. Without getting inside the Cathedral at the end of the film, I had no ending. I had no movie.

Velasquez: Did you have trouble finding a distributor for the film?

Estevez: What we've done is we've put together our own studio. There's a company called BDA here in New York City, who was responsible for releasing the Banksea film last year. So they came on board to help out. We got another company called Arden (?) releasing. They've been very helpful in securing deals with AMC Theatres and with the Wal-Mart retail chain. We also have a contract with Comcast. So what we've done is create partnerships, built the studio without the brick and mortar, if you will, and bring consultants on from every walk of life to help us get this message out, get the theatres, and make sure the advertisements get on the air and the newspapers. It's been an education that I didn't ask for, these last couple of years, buts it's been absolutely invaluable.

Velasquez: And you're marketing the film with your father (Martin Sheen) in a coast to coast tour.

Estevez: That's right, we're on a tour bus, we don't have a $50 million ad campaign but we have a $ 50,000 bus. We're on it every day, we started six weeks ago, from California, and set out for the East Coast, and we've arrived here (NY). We're going to head back, I believe on Sunday, we're going to go to Toronto for a bit, head over to Ann Arbor, Indianapolis, and I think we're going to end in Cincinnati on Friday. So we have another week on the road, and then we'll head back to LA and do some LA press.

Its been very exciting. We've been screening the film and doing Q&A's  in each town, sometimes two a night and its been very gratifying. The people who attend are given a microphone and are free to ask any question they like. We don't pre-screen anybody, and people have been giving testimony, been witnessing. And saying, "Thank you for making this film" and "thanks for making something that we want to see."

Velasquez: Did making this film draw you closer to your dad?

Estevez: He and I are very close, my mother and father are together 50 years, we live right down the street. So we are close in proximity and close in our hearts. I consider them my best friends, and the film is really an extension of that and it was a joy to put it on film.
(Martin Sheen plays Emilio's father in "The Way.")

Velasquez: My readers are very grateful that you made a film showing the Church in a positive light and giving the unborn a voice. We want to know what's next for you?

Estevez: I'm thinking about a family sports themed film in the tradition of "Mighty Ducks." I've written a film about the world of competitive harness racing, which I'm, a fan of, so that may be next. I'm potentially shooting that next year.

"The Way" opens in theaters across the country on Friday, October 14.