Everyone Could Use Seven Days in Utopia!

Luke Chisolm didn't end up in Oz but he did land in Utopia - his car in a cornfield after almost hitting a cow in the road. There this pro golfer, who recently had a meltdown, meets Johnny, who tells him that if he spends 7 days in Utopia, he'll get his game back. He doesn't know it, but his life is about to change. Seven Days is worth seeing. In fact, I left wishing I could go to Utopia and work on my life - let alone my golf game. 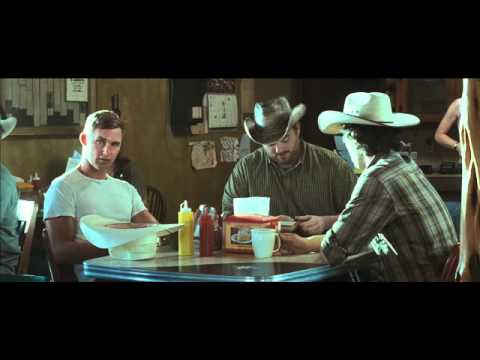 WASHINGTON, DC (Catholic Online) - Luke Chisolm (Lucas Black - "Cold Mountain," "Friday Night Lights," and "Legion") is a professional golfer who has all the "goods" to make it to the top of the game. His father is his caddy and the one who not only pushes him to excellence but pushes all of his buttons as well. The combination of pressure as a tour golfer and pressure from his dad leads to one of the most horrible meltdowns in the history of the game on the eighteenth green.

Adding insult to injury, Luke's dad walks off the course in disgust. Then, after the tournament his tires squealing, Luke heads off to nowhere fast. As far as he's concerned, his career is probably over.

He didn't end up in Oz but he did land in Utopia - his car in a cornfield after almost hitting a cow in the road. There he meets Johnny Crawford (played very strongly by Robert Duvall) who rides up on a horse to help.

Luke's life is about to change in Utopia, Texas - population 373... I'm mean 375, you see, twins were born but the sign hasn't been taken down and changed yet.

There, he receives a unique invitation from his new acquaintance, "You spend seven days in Utopia and you'll find your game."

In seven days, Johnny gives him a series of life lessons and physical/mental exercises the will not only help him become a better player but a better man. You see, Johnny used to be a pro golfer himself. Much of what he learned came out of his own personal failure as a player and a human being.

The story was based on the book by David L. Cook, a nationally known sports psychologist, author and speaker, entitled "Golf's Sacred Journey: Seven Days in Utopia."

So far, Seven Days sounds like Karate Kid for adults. Wax on... wax off. Learn the basics in this most unusual way and you can be a champion. My fear is that may be the only thing some take away from the film. But as the infomercials say, "There's more!"

First, you have a leading actor who actually plays golf. Lucas swings a club like the best of them. The golf sections were really authentic.

David Cook, who also co-wrote the screenplay, said, "It's not just a golf movie and the message extends way beyond golf. But, if you like golf, it's one of the most authentic golf movies ever made. The lead actor actually plays game!"

Johnny Crawford and Luke Chisolm are also very engaging to watch as mentor-mentee. There are some great moments between them.

For example, after watching a replay of the meltdown on TV, Johnny says, "I saw you on TV, gotta say it was painful to watch." Luke replies, "Try livin' it," and Johnny responds, "Believe it or not, I have."

Then, you have Utopia, a small Texas town with a charming girl Luke's age named Sarah, (Deborah Ann Woll - "True Blood) and a trio of young tormentors lead by an aspiring rodeo star (Brian Geraghty - "The Hurt Locker").

The film was actually shot in Utopia, Texas, located in the hill country west of San Antonio. There is lots of beautiful scenery.

A lot of the small town interaction was predictable, including the confrontation between Luke and the rodeo star/wanna be boyfriend of Sarah, but it did add some granularity to the story.

The spotlight shines strongest on the life lessons that Johnny wants to teach Luke; and they are more than simply "sand-a floor" applications. Luke's problem, as with most of us, isn't his game as much as his view of performance as his baseline for life.

Johnny ponders this in a narrative saying, "How can a game have such an affect on a man's soul?"

Cook explains, "Most people in the world are just looking for more. Life hasn't done it... none of their successes have. There's fear in their eyes. Basically they have to get in a different game."

"It's fear that their worth, their value and their acceptance are all based upon performance. If they win and accomplish their goal, the fear [still] comes out because they feel let down with what they actually receive from it."

Throughout the movie there are some great bits of wisdom to be remembered:
-    "The first step in finding a good game is finding some conviction.
-    "Off-handed comments take you off your game and erode confidence."
-    "I have a respect for tradition but a passion for the truth."
-    "Family, friendship, faith and love mean more than winning."

There are a lot more where those came from for anyone looking for some life lessons. While woven into the story line, David Cook's pointers can be applied to any number of daily situations.

The movie does have an element of Christian faith but, in many ways, it dips its toe in the water and doesn't take the plunge to bring the message out fully. This may disappoint some Christians in the audience but it does help avoid the criticism of too much "preachiness" - something that quickly polarizes secular audiences.

Most of the message is seen rather than heard.

Faith, however, is important to the author. As a sports psychologist, Cook helps athletes with areas of play beyond the physical, such as fitness and the mechanical aspects of the game. He works on their mental game, so they can be the best they can.

"If I just left it there," he added when we talked, "I'd be empty like everyone else. I want them to talk with me about their faith journey - building the right foundation from which they can play. Otherwise they will play in fear because their entire identity is based on performance. You can play without fear when you know who your are."

The one part of the movie that I felt needed a lot more development was the relationship between Luke and his father.

Cook describes him as over-involved. "We have a father in our movie who is there too much; he is overbearing. There are a lot of dads like that who want their kids to be the best and believe they know how to make that happen."

The healing of the relationship happened fast, based on an assumed epiphany by dad. This was followed by an apology and a quick restorative act by Luke. I'm a dad and this seemed a bit of a quick fix. Maybe more of the relational healing was left on the cutting room floor.

So what is the main takeaway from Seven Days in Utopia? David Cooks says it's "making clear that there is a calling purpose and significance for every living person. Every breath is important and we should breathe believing that God is calling you to a bigger game than the games in life."

Seven Days is worth seeing. In fact, I left wishing I could go to Utopia and work on my life - let alone my golf game. As our Lord said in the gospels, there is value to finding time to "come away to a quiet place and rest awhile."

The film, which is rated G, premiers on September 2, 2011 in theaters. While this is a good family-friendly movie, the dialog may be too advanced for smaller children to follow.

Be sure to look for our special offer from Catholic Online at https://www.catholic.org/adv/utopia/. See it... Feel it... Trust it.