Many of us remember hearing the news in 2003 of a young girl attacked by a shark in Hawaii. Most of us never were given the rest of the story. Soul Surfer, tells this story of courage, commitment and a devoted faith in Jesus Christ. After a strong box office run, this encouraging film is now available on DVD/Blu Ray. 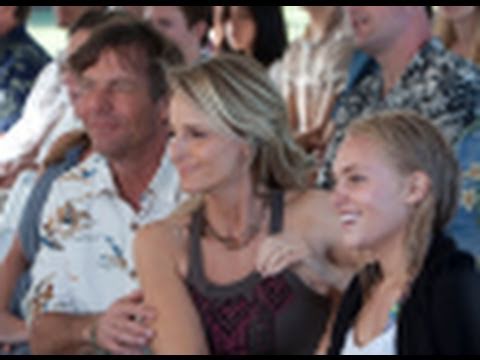 WASHINGTON, DC (Catholic Online) - On Tuesday, August 2, the movie Soul Surfer will become available on DVD/Blu Ray. You don't have to look anywhere else to find a great Christmas or birthday gift that will bring encouragement and hope to anyone's life - young or old. To preview or purchase the Soul Surfer DVD, you can click here.

When I saw Bethany Hamilton at the New York premier of "Soul Surfer," I was struck with the poise and gracious demeanor that accompanied this courageous young woman. It is when you notice her missing left arm that reality hits and you recognize the horror, pain and rigor of rehabilitation what she has endured over the past eight years.

Bethany is a real life miracle. In 2003, at the age of 13 she was ranked second for female surfers in Hawaii when she lost her arm in a shark attack during practice. At the premier, hosted at the Paley Center for the Media in Manhattan, we were able to meet the person who actually endured the adversity portrayed on film and did more than merely survive. She triumphed.

The real life Soul Surfer arrived at the premier with her family and youth minister. She is now a beautiful 21 year-old woman who is a professional surfer and, as she always had been, a passionate follower of Jesus Christ.

While sitting at a table with her that night, invariably the question was asked, "If you had it to do over again, would you get in the water that day?" Her answer was, "Yes, I would. I have accepted it as God's will and, through my experience, have been able to touch a lot of people's lives concerning Jesus Christ."

She and her entire family were deeply involved in the entire project. "We would get scripts and proposals," her oldest brother, Noah, told us, "then we'd gather as a family and pray about it. Some of the scripts were quite awful, to be honest."

The family indicated that, overall, they were very happy with the end product, even though a "little Hollywood" always gets in every project. Noah said, "I'm the film's biggest fan!"

Director Sean McNamara, who has done a large number of Disney projects as well as movies such as "Bratz" and "3 Ninjas: High Noon at Mega Mountain," was captivated by Bethany's story. Growing up a California surfer, he wanted to create a story that that did not downplay the importance of Hamilton's faith.

After meeting with the family in Hawaii, he was convinced that he wanted to make this film and began putting together the pieces.

The movie is cinematically beautiful with surfing footage that rivals some of the great wave movies of the past. Viewers are taken into the water, catching waves, shooting the pipeline and, sometimes, wiping out. Together with good sound effects and an eclectic musical score that really works, moviegoers will certainly enjoy this on the big screen.

The greatest challenge for this type of project involved producing a film with box office carrying power, in order to maximize the impact of the message, while maintaining the authenticity of a story that was Christ-centered from the very beginning.

While I would have liked a few more scenes that focused on Bethany's interior faith, no one can miss the fact that her faith in Christ is central to the film. Clearly, her faith was not discovered through her adversity; it was already present, providing a strength and inner fortitude that set the foundation for a future and a hope.

The big question for any inspirational film is, "How do you portray faith commitment?" This film faced the same struggle.

For some critics, merely having Christianity addressed in a film is cause for condemnation. Our Christian faith seems to continue enjoying a sense of politically correct condemnation.

From the very beginning of "Soul Surfer," you knew that Bethany's world centered on Christ, yet it was just a given - a worldview out of which everything would flow.

Had McNamara, a practicing Catholic, used a more deliberate plot exposition or exaggerated dialog elements, Soul Surfer could have become a "preachy" cliché film or perhaps a documentary.

The director seemed to have heeded the words of St. James, who said, "You show me your faith without works and I will show you my faith by my works." (James 2:18) He alluded to this during an interview at the premier. "She [Bethany] really regained her passion during a mission trip with World Vision to Thailand after the devastating tsunami. I thought, "Let's not talk about her turn around; let's show her in Thailand!"

The film focused on two significant issues in Bethany's life - her adjustment to doing normal everyday activities with one arm and her passion for competitive surfing. Underscoring it all, however, was a trust in God that was not shaken by the events even when her world, for all intents and purposes, was turned upside down.

As an older adult, I wanted more emphasis on the Bethany's struggles and as well as more development of the issues within the family. While there was some interaction, McNamara chose to focus more on the action side - particularly her surfing - for dominance in the film. This was probably a good decision in order to impact younger audiences.

The scenes of Bethany at home with her family after the attack visually underscored the obstacles that this young 13 year-old had to turn into opportunities. Whether it was slicing a tomato, opening a loaf of bread for a sandwich or getting dressed, everything was new.

An ever-present sub-theme in the movie is the friendship between Bethany and Alana Blanchard. The accident was as devastating to Alana as it was for her best friend, taking work for her to dig out of her own issues, having witnessed the attack.

Of particular value is the way the two friends, though strong competitors, supported and cheered for one another all along the way.

The cast for the movie includes some A-list talent including Anna Sophia Robb ("Winn Dixie," "Charlie and the Chocolate Factory" and "Bridge to Terebithia") as Bethany, Dennis Quaid ("The Right Stuff," The Day After Tomorrow," and "The Rookie") as her father, Tom Hamilton, and Academy Award Winner Helen Hunt ("As Good as It Gets," "Pay It Forward," and "What Women Want") as her mother, Cheri Hamilton. Her brothers, Noah and Timmy, are portrayed by Ross Thomas ("What's Bugging Seth and "Cutting Edge 2") and newcomer Chris Brochu.

Robb was not only the choice of the film's executives for the main character but the Hamilton family as well. Bethany had seen the film "Bridge to Terebithia" with her mother a few years earlier and both were convinced then that she should play the part.

The young actress had her work cut out for her as Bethany. Outfitted with a prosthetic that looked like Bethany's left shoulder and a green sock over her arm, which would later be digitally erased, she ably captured the angst and awkwardness Hamilton must have experienced in adjustment to life after the accident.

Carrie Underwood plays Sara Hill, Bethany's youth director at their north shore church. In terms of her image, values and commitment to Christ, I saw Underwood as a welcome addition to the cast. However, appearing in her first movie role, between the script and her inexperience, Underwood's character seemed two-dimensional.

This came into even greater clarity after talking with the real Sara Hill, who has quite a testimony herself concerning a debilitating injury she had received. Along with this, she possessed a missionary spirit that was needed to gain the trust of the people on Kauai when she first came there as a youth minister.

The movie fails to really capture Sara. She is comes across more as a loving big sister, who supports Bethany but doesn't have any real answers, just a shoulder to cry on. My guess is that Sara's rich experience and deep personal faith played a significant role as she cared for Bethany after the accident.

While the entire family will enjoy the movie, it will have a special impact on anyone, young or old, facing adversity of any kind. During a talk with a group of us at the premier, Anna Sophia Robb stated, "This is a girl-power movie," and then corrected herself. "No, actually it's a people-power movie."

For Bethany Hamilton, however, it has to do with much more than people-power alone. She would probably call it a "God-power movie." She is quite clear that in all she faced and was able to overcome, the glory goes to the Lord, who is the giver of all grace.

"Surfer Girl," which is rated PG for an intense accident sequence and some thematic material, is well worth seeing. Please note that the accident is purposely understated and the actual shark attack was not seen in order that it may be suitable for older children. The scene does, however, show the significant loss of blood.

You can preview or purchase the Soul Surfer DVD by clicking here.

-----
Randy Sly is the Associate Editor of Catholic Online and the CEO/Associate Publisher for the Northern Virginia Local Edition of Catholic Online (http://virginia.catholic.org). He is a former Archbishop of the Charismatic Episcopal Church who laid aside that ministry to enter into the full communion of the Catholic Church.