WEDNESDAY HOMILY: Be Healed of Leprosy

Free World Class Education
FREE Catholic Classes
In the Gospel for today, only one out of the ten lepers was healed of the spiritual leprosy of ingratitude

Leprosy, we are told in the book of numbers, came from Miriam, the sister of Moses, grumbling about his authority and inciting people against Moses.  God was not happy.  He had said, "Moses was very humble, more than anyone else on earth."  Moses, when he saw what happened to Miriam after she had just finished raising up people against him, cried to the Lord, praying for his persecutors, "Please, not this!  Please heal her!" 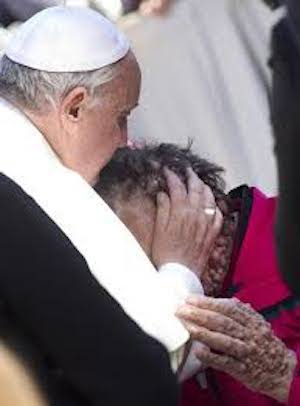 P>HYTHE, KENT, UK (Catholic Online) - John was a Sudanese man, who came to the homeless shelter of Mother Teresa near San Gregorio in Rome.  He felt like a leper.

There was another leper whose face was appeared downcast.  He always sat on mat near the corner by St Mary of the Angels and Martyrs near Termini station.  I bent over one day to give him a piece of bread. "NO!  Money!  I want money!"

I found out from asking around that the man had been offered a cure for the disease but refused and he also put oil on his skin and open wounds to make them shine in the sun.  He made a lot of money.

One day I was serving John breakfast and he shied away from me as if to say, "Don't touch me.  I am unclean," which made me grab his bald head and kiss it, saying, "Jesus loves you and so do I!"  He kept up and embraced me and wept.

Two lepers.  One was healed of his shame, the other was milking it for his advantage.

In the Gospel for today, only one out of the ten lepers was healed of the spiritual leprosy of ingratitude.

Leprosy, we are told in the book of numbers, came from Miriam, the sister of Moses, grumbling about his authority and inciting people against Moses.  God was not happy.  He had said, "Moses was very humble, more than anyone else on earth."  Moses, when he saw what happened to Miriam after she had just finished raising up people against him, cried to the Lord, praying for his persecutors, "Please, not this!  Please heal her!"

And God did, at the request of his chosen one.

Leprosy is a disease that came about because of rancorous dissent against God's authority.  Interestingly, part of the rite of purification is to submit to the authority of the priests of the temple, which is why, when Jesus healed the ten lepers in the Gospel, he merely says, "Go show yourselves to the priests."

God healed the lepers at the request of His chosen One, Jesus.

Leprosy is an icon of each of us.  We have within us the disease of sin, the disease of the rebellion and rejection of God's authority.  The sacrament of Baptism washes this away, but there is a residue that remains that if not tended to, could infect us and kill us eternally.  The most holy Eucharist is the Sacrament of gratitude.  Eucharist actually means gratitude.  It is a sacrifice of gratitude.  It is where Jesus touches us, and in touching us, heals us.

The first reading shows us the Good News about authority.  God is the judge.  He will judge and correct all authority that is unjust.

"Because authority was given you by the Lord and sovereignty by the Most High, who shall probe your works and scrutinize your counsels.  Because, though you were ministers of his kingdom, you judged not rightly, and did not keep the law."

Pontius Pilate, looked at the Incarnate Truth Himself and asked, "What is truth?" and Jesus said of him, "You would have no power over me if it had not been given to you from above."  This teaches us two lessons: first that God is the only source of authority and if anyone has it, it has been granted him by God, and second, that God grants authority to people who misuse it for the sake of redemption.

This is the Good News about authority.  Firstly, that God is their judge because only he permits any leader, ecclesiastical or civil, to wield any authority.  Secondly, we should not fear when an authority is errant, unjust, or wicked, for even the abominable authority of men is the furnace in which the metal of the saints is tested and purified and by which true nobility of Christians is manifest.

Obama?  Cameron?  Pope Francis?  My parish priest?  Who are they?  Authorities.  Yet they have limited power.  They are all here to sanctify us, either by the via negativa or via positiva, by either showing us what the Church really is by kissing lepers and embracing the poor, or by being the thorn in the side of all good and right people by attempting to pass wicked laws and ordinances that try and test our souls.  They are all instruments of God.  They are not God, but He uses them in the way he sees fit.

In the end, we should be like the grateful leper, like John of Sudan.  We should prostrate ourselves at the feet of Jesus and thank Him for healing us, thank Him for encountering us in our tendency to stray.

May Our Lady, whose Immaculate Heart is the model of humble obedience to God's authority and who perfectly conformed her life to Christ, even when she beheld His glorious body, dying and disfigured worse than any leper on the Cross, help us to be healed of spiritual leprosy and worship God.

-----
Father Samuel Medley, SOLT, is a priest of the Society of Our Lady of the Most Holy Trinity, and is based in Hythe, Kent, United Kingdom.  He speaks to groups around the world on Blessed Pope John Paul II's Theology of the Body.  Visit his homily blog http://medleyminute.blogspot.com or his blog on the Church's teachings on marriage and family life http://loveandresponsibility.org