The Passion of John the Baptist: A Man Who Gave His Life for What is True

Free World Class Education
FREE Catholic Classes
John the Baptist spoke what was just and true, and died for having spoken it.

John the Baptist spoke what was true, and died for having spoken it. Some might think his decision was extreme, radical even. Racial? Yes, in light of today's culture. Extreme? No. Wise is the better word; saintly the better description. 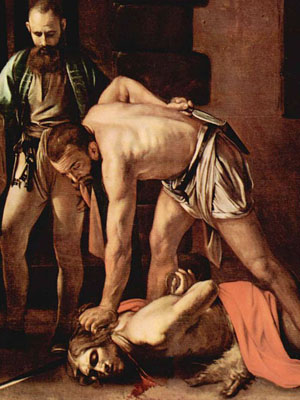 GLADE PARK, CO (Catholic Online) -- Today we celebrate the Memorial of the Passion of St. John the Baptist.

The gospel (Mk 6:17-29) is particularly revealing of the malicious intent of Herodias, who took advantage of Herod Antipas's offer to reward her daughter's entertaining dance with whatever she desired. The result is that Herodias demanded the head of John the Baptist, a request her daughter passed along for her mother as her own. It is likely Herodias had brewed a great deal of hate in her heart for John the Baptist; thus she seized the opportune moment to bring about a malevolent end. Herod initially hesitated to comply, but went ahead and ordered the execution so as not to appear weak in front of his guests. This was a particularly dangerous sin on Herod's part, because he chose to murder another man to protect his own popular image. A sure sign of an extreme narcissist.

What was the source of the loathe Herodias directed at John? Previously, John the Baptist had admonished Herod for taking his half-brother's wife (Herodias) as his own. The problem here, is that Herod's half-brother, Philip, was still alive, which meant Herod's attempted marriage to Herodias was no marriage at all--it was adultery. It is the teaching of Christ that marriage is a lifelong, permanent bond between a man and a woman. To divorce or separate and attempt to contract a new union with someone else is to commit adultery (see Mk 10:11).

John the Baptist spoke what was true, and died for having spoken it. Some might think his decision was extreme, radical even. Racial? Yes, in light of today's culture. Extreme? No. Wise is the better word; saintly the better description. Everyone has an obligation to live according to the commandments of God and a duty to speak what is true. That is something often viewed with heedless indifference in today's highly relativistic age, but it is nevertheless incumbent on everyone who claims to bear the name of Christ, who is Truth himself, as perfectly God and perfectly man.

If we comply with the corruption of this age, living according to its evil tenets and communicating it to others through our willing adherence to its errors, we might well live more comfortably: we might receive approbation from the powerful and attain to high status among a society gone awry, plagued by moral fragmentation. In the end, however, we will have lost everything that really matters.

John the Baptist understood that truth very well. He was willing to risk--and offer up--his life for what is true and thereby gain eternal life, rather than offer his approval of evil designs, which merits its loss.

Deacon Frederick Bartels serves the Diocese of Pueblo, Colorado, as a member of the Catholic Clergy. He is a Catholic writer, educator and speaker who knows his Catholic Faith is one of the greatest gifts a man could ever receive. He is a contributing writer for Catholic Online. Visit him also at joyintruth.com, and Facebook. Watch for his videos on Youtube and his podcasts available on iTunes and Google Play. Access them by searching "Joy In Truth."