Archbishop Vincenzo Paglia, grand chancellor of Rome's Pontifical Institute John Paul II and president of the Pontifical Academy for Life, has responded to controversy over a plan to restructure the school's faculty and curriculum. 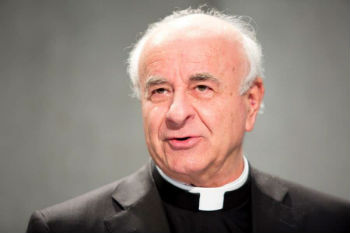 Washington D.C., (CNA) - Archbishop Vincenzo Paglia, grand chancellor of Rome's Pontifical Institute John Paul II and president of the Pontifical Academy for Life, has responded to controversy over a plan to restructure the school's faculty and curriculum.

"We will be able to address and overcome the concerns and the hesitancies that have greeted the renewed structure of the Academy, and I might add of its sister entity, the John Paul II Institute as well," Paglia said Sept. 3 at Loyola Marymount University in California.

Paglia said that concern can be overcome through the "solid and loving theological basis" outlined for the Academy in a January letter from Pope Francis, written to commemorate the Academy's anniversary.

In the letter, Paglia said, "the Pope recalls for us the great theological truth that must be our guiding principle - all of creation is brought into being by God's love, a love that is so profound that itself it is a family, Father, Son, Holy Spirit, and that it is a family so fruitful that it has produced on Earth a family that mirrors it."

Paglia emphasized that the school must "participate in dialogue with everyone" while working to fulfill its mission.

In his address, Paglia spoke about the importance of a Catholic perspective in the study of bioethics, saying linguistic and cultural differences, as well as different theological and philosophical approaches, can condition the way subjects are studied and taught, even when they are foundational to the Catholic faith.

Paglia acknowledged the recent conflict which has engulfed the pontifical institute, following the approval of new statutes for the school in July, and reiterated the pope's stated aims for its reform.

The new statutes were issued in response to a 2017 announcement by the pope that he would legally refound the institute to broaden its curriculum, from a focus on the theology of marriage and the family to an approach that will also include the study of the family from the perspective of the social sciences.

After the new statutes, students, alumni, and faculty raised concerns about the role of faculty members in the institute's new governing structure, about the reduction of theology courses and the elimination of some theology disciplines, and about the dismissal of some faculty members, especially Fr. Jose Noriega and Msgr. Livio Melina.

Critics of the changes voiced their concern that the essential purpose of the institute was being diluted, and a group of 49 academics from universities around the world wrote to the administrators of the Institute asking for the reinstatement of the dismissed faculty.

Yesterday, it was reported that the vice-president of the Institute proposed a compromise between university administrators and concerned faculty members.

Noting an apparent "impasse" between faculty and administrators, Fr. Jose Granados suggested a "proposal for a constructive solution" in an Aug 27 letter to Paglia and the school's president, Msgr. Pierangelo Sequiri.

In his speech Wednesday, Paglia reiterated Francis' stated aims in refounding the school, saying that "the Pope wants the Academy, and the Institute, to widen its scope of reflection: not limiting itself to addressing specific situations of ethical, social or legal conflict;  articulate an anthropology that sets the practical and theoretical premises for conduct consistent with the dignity of the human person; and make sure it has the tools to critically examine the theory and practice of science and technology as they interact with life, its meaning and its value."

Concluding his speech, Paglia said that "wisdom and boldness" were essential to both the Academy and Institute's mission to "understand our heritage of faith with a rationality that is worthy of man."

"It is for this reason that the Academy, and the Institute, without in any way abandoning the tradition and accomplishments of their founders, will participate in dialogue with everyone," Paglia said, "so that the development and use of the extraordinary resources that the Pope speaks of is oriented toward promoting the dignity of the person and the human family in the light of the passionate Divine love that brought it into being and will lead it safely home."