Free World Class Education
FREE Catholic Classes
'Through this and through prayer, the family has survived.'

One hundred and seventy-nine years ago, two Jesuit priests sold 272 persons at a slave auction. Their families were torn apart: many of them were shipped over a thousand miles to Louisiana, and many more were barred from practicing their Catholic faith by new slave masters. 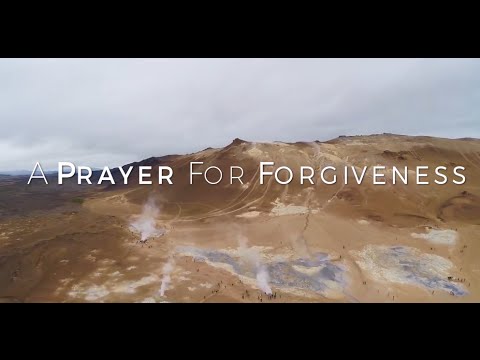 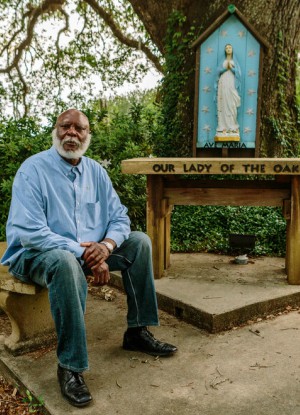 Georgetown apologized to ancestors of slaves sold to Louisiana to pay off Georgetown University debts.

Washington D.C. (CNA/EWTN News) - Meanwhile, the Jesuit priests used the money they received from the sale to pay off debts for Georgetown University - the oldest Catholic university in the United States.

On April 18, Georgetown University and the Maryland Jesuits apologized for their roles in the slave sale and started their ongoing efforts to make amends for their actions.

"As a Catholic, the whole concept of reconciliation and forgiveness is so important to us," Jeremy Alexander said to CNA. Alexander is a descendant of one of the slaves sold by the Jesuit order for the benefit of Georgetown University, as well as an employee of the institution in its Office of Technology Commercialization.

"To hear the Jesuits say they are sorry for the sins of their brothers, of what happened in 1838, it is - I am very grateful for that."

"The priest who went up to say the apology - it really brought me to tears," he said, adding that he was also deeply moved to hear in person that the school is sorry "for the acts of slavery, for that horrible time in America."

"Through this and through prayer, the family has survived," Alexander mused.

The morning opened with a Liturgy of Remembrance, Contrition and Hope, presided by Auxiliary Bishop Barry Knestout of Washington and Fr. Robert Hussey, S.J., Provincial of the Maryland Province of the Society of Jesus.

Afterwards, the school dedicated two campus buildings to Isaac Hawkins and Anne Marie Becraft. Hawkins was the first enslaved person listed in the documents outlining the 1838 sale. He was 65 years old at the time. Becraft, later known as Sr. Mary Aloysius, OSP, was a free black woman who lived in Georgetown and founded a school for black girls in the neighborhood in 1827. She later became a member of the Oblate Sisters of Providence, the first successful Catholic religious order established by women of African descent.

Prior to 2016, the halls had been named for the two Jesuit priests who orchestrated the sale: Fr. Thomas Mulledy, S.J. and Fr. William McSherry, S.J., both former presidents of Georgetown University. The 272 persons sold at the slave sale were sold for $115,000 - approximately $3.3 million in today's value.

At the time, the Vatican did approve the sale, but placed many conditions upon it, mandating that families not be separated, that the money not be used to pay off the school's debt, and that the new owners respect the religious practice of the slaves - many of whom were baptized as Catholics.

Fr. Mulledy and Fr. McSherry met none of these conditions: families were separated, money was used to pay off the school's debts, and investigators from the Holy See found that many of the slaves were barred from attending Catholic churches and receiving the sacraments once they arrived in Louisiana.

Fr. Mulledy was later called to Rome to defend his actions surrounding the slave sale to the superior of the Jesuit order and asked to resign from his post at the time as head of the order in the United States. Later he was allowed to return to the United States, was given a second term as president of Georgetown University, and founded the College of the Holy Cross in Worcester, Mass.

In September 2015, Georgetown University formed a working group to research the conditions surrounding the 1838 sale and the fate of the slaves owned and sold by the Maryland Province of the Jesuit order. Since then, the group has also held discussions within the Georgetown community and has started to reach out to the tens of thousands of descendants of slaves sold by the Jesuit order.

The group has also recommended, in addition to holding a reconciliation service and rededicating several of its buildings, that the university extend preferential admission status and additional financial support to descendants of the 272 persons sold in 1838. Additionally, the working group has suggested the establishment of a public monument to honor the memory of the 272 persons sold in order to benefit the university.

On Thursday the university's president, John DeGioia, apologized for the school's historical involvement in the slave trade. Fr. Timothy Kesicki, president of the Jesuit Conference of Canada and the United States, also made a heartfelt apology to God and the descendants of the 272 slaves sold by the Maryland Jesuits.

"We cannot hide from this truth, bury this truth, ignore this truth. Slavery remains the original evil of our republic, an evil that our university was complicit in, a sin that tore apart families, that through great violence denied and rejected the dignity and humanity of our fellow sisters and brothers," DeGioia said. "We lay this truth bare, in sorrowful apology, in communal reckoning."

"We betrayed the very name of Jesus, for whom our least society was named," Fr. Kesicki recalled of the 1838 sale at the liturgy of contrition.

"Now, nearly 200 years later, we know that we cannot heal from this tragic history alone," he continued. "We have no right to [forgiveness]. It is yours to restore," he said to the descendants present at the liturgy. 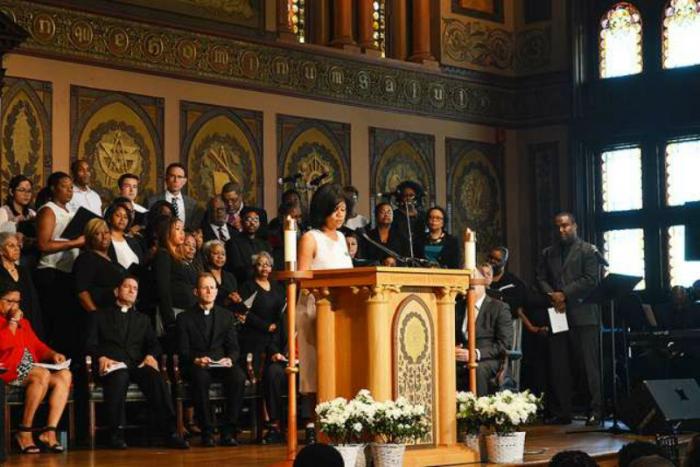 One descendant, Sandra Green Thomas, explained how the university's involvement in the slave trade was part of a societal injustice perpetrated against an entire race, the effects of which are present today.

"All African-Americans have hungered and thirsted for the bounty of the promise that is America, the promise of the equality of man, the pursuit of happiness, those God-given and unalienable rights," she said at Tuesday's liturgy, "but for so many of us," they only saw "the meagre scraps" of that bounty.

"To be denied those things that rightfully come from the labor of our bodies, to have our minds deprived of the tools to develop to their potential, to live under soul-crushing injustice, stress, and deprivation, surely these are sins against the word of God and therefore God Himself," she continued.

"These people, the 272 men, women and children we remember today, endured all of these. Their descendants are still experiencing them today."

Both university officials and descendants of the 272 slaves acknowledged that the school's actions -  financial aid and granting priority admission to descendants of the slaves - and the liturgy and dedication mark only the beginning of a reconciliation process that must continue forward.

"We do not seek to move on with this apology, but to move forward with open hearts to respond to the urgent demands of justice still present in our time," DeGioia said, citing Fr. Kesicki's call to "move forward" and not "move on."

Dr. Marcia Chatelain, a professor of history and African American Studies at Georgetown and a member of the working group, was blunt about the challenge facing the parties to reconcile and redress past wrongs: "How do you make repairs for something that's irreparable?"

Nevertheless, she hoped that other universities and institutions involved in the slave trade would follow Georgetown's example and start addressing their past. "American Catholics have a long history of ignoring their faith in order to conform with the demands of the culture," she said.

"I think that when we think about race and racial justice we see that the Church has really failed in its responsibility of really benefitting from the institution of slavery and reproducing the systems of racial injustice." Catholics should ask themselves if they see "churches as a place where justice is done or as a place that obstructs justice," she added.

The university's road to reconciliation, however, has been challenging in itself. Some of the descendants of the slave sale, like Delores Williams Johnson, noted their hurt and frustration with Georgetown for initially moving forward with reconciliation plans without contacting the descendants themselves. In response, Johnson, a descendant of Isaac Hawkins with roots in Louisiana, helped to co-found the Legacy of GU272 Alliance, a nonprofit group that helps locate and identify each descendant of the slave sale.

The goal of the organization, Johnson told CNA, is to "get everyone involved" and help the descendants come to a "mutual" view of how to proceed, not only with the university, but also with the other descendants. She stressed that Georgetown "can't make demands for us" but instead has to work alongside the descendants, and the descendants with one another, to decide how to move forward.

Johnson pointed to the naming of Isaac Hawkins Hall as an example of this kind of misstep where Georgetown was initially "talking about us and not with us." Initially, she said, the university was only going to call the building Isaac Hall, hearkening back to historical practices where slaveholders "didn't have to call people by their first and last names." The descendants, she said, pushed for Hawkins' last name to be included, and eventually the university listened to this input and included Hawkins' first and last names on the newly dedicated buildings.

These adjustments aside, Johnson said she was "hopeful" in the steps Georgetown was taking. "It gives us an opportunity as descendants," she said, to learn what their ancestors had experienced, as well as to "continue dialogue with Georgetown." Johnson stressed, however, that this dialogue will be "an ongoing, long-term process."

While many of the descendants of the 272 slaves sold in the sale are just now forming a relationship with Georgetown University, others have rediscovered this connection long after forging a new tie with the university.

Jeremy Alexander was working for Georgetown University in its Office of Technology Commercialization when a distant cousin emailed him to let him know of connection to the Jesuit slave sale. Genealogical testing confirmed that he was a descendant of Anna Mahoney Jones, one of the persons sold by the Jesuits.

"It was an amazing find, I never expected that I would learn the names of my ancestors like Anna Mahoney Jones. And to know about this connection, it's special to me," he told CNA.

Like many other descendants of the sale, Alexander and his family are Catholic. He said this connection not only of history but of faith has been an important part to him in the reconciliation process.

"We never expected to hear anything, that we would get an apology. But to actually hear 'we're sorry,' that means a lot to us. And hearing it from Georgetown University as well, it's a step in the right direction. And knowing that - it just doesn't end here, and they want to do more to help and show how sorry they are, and we're looking forward to all the healing process."

Alexander said he was also encouraged, not only by the apology, but also by the university's plans to continue making amends and helping the descendants of those harmed by the sale.

"All we know is that my ancestors could only hope for the better for the next generation. That's all that I can hope for my son, is that he can do better than what I am doing right now," he explained. "And that's what I look forward, to see the progress that Georgetown is going to make, that whole commitment to this healing process with the descendants."