Advent Reflection: The Manger and the Cross - Calvary Begins in Bethlehem

All the events surrounding His birth reveal to us how closely life and death, Christmas and Easter, Bethlehem and Golgotha, the Manger and the Cross are bound together. Â Indeed, Calvary begins in Bethlehem.Â 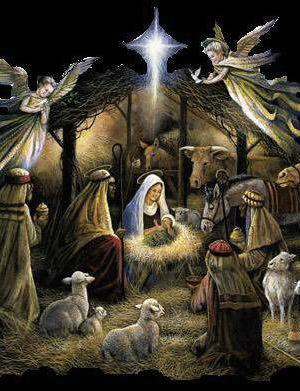 AUSTRIA (Catholic Online) - Â Â During the Advent season we are called to prepare ourselves for the coming of our Redeemer Jesus Christ by prayer, penitence and joyful expectation as well as by meditating on the Christmas Mystery. When we contemplate the ultimate consequence of His Incarnation in poverty and need, interesting aspects arise which make us grow in faith, deepen our love and especially lead us to a great gratitude towards God.
On the day after Christmas the Church celebrates the first martyr, the holy deacon Stephen. He was the first in Church history to lay down his life for the sake of his faith, for Christ. Â Three days after the Solemnity of the Nativity of our Lord and Redeemer we celebrate the feast of the "Holy Innocents", the victims of the infanticide in Bethlehem. St. Augustine and numerous Fathers of the Church praised and venerated the infant martyrs.

They were "granted", as St. Augustine said, "not only to die as witnesses (martyrs) for Jesus, but in His place." Maybe they were not the first who consciously and out of their own free will gave their lives for Christ as St. Stephen did. Â Yet they died for the sake of Christ. They died in His place, as the very goal of the infanticide of Bethlehem was Jesus Himself.
Already this temporal sequence makes us aware how closely life and death, Christmas and Easter, Bethlehem and Golgotha, the Manger and the Cross are bound together.

Do we not contemplate in Advent season the "Coming of the LORD in His lowliness"?Â  Â
Do we not contemplate the infinite condescension and humiliation of the LORD, the Creator's SON, GOD's SON, who did not shrink back from becoming man?
Is not the search for shelter a way of the Cross for the LORD, who is suffering as He comes into what is his own , but his own people did not receive Him?
Is Bethlehem not a Mount of Olives as well, where the LORD and in a special way Mary and Joseph as well suffered an agony, as they were not able to find a lodging for the SON of GOD who was entrusted to them?
Is the stable of Bethlehem not a Golgotha as well, where the LORD begins his life in a manger in order to yield it 33 years later on another wood, the wood of the Cross?
The Passion of the LORD began with the Incarnation and continues by way of the refusal of the Messiah in Bethlehem and his birth in a cold, dirty stable; by way of the prophesy of Simeon and the flight before Herod to Egypt until to the last chapter of this PassionÂ  -Â Â the death on the Cross.

The birth and death of the Redeemer, one could say: "Manger and Cross", are most closely connected! Â Born in the wood of the Manger, normally already constructed in the form of a cross - the LORD died on another wood, the wood of the Cross - and all this because of the sin which was committed at the wood of the tree of knowledge in the Paradise. Â

"Lord,Â by Your birth you delivered Yourself also to death, in Your manger You felt and experienced the wood of the Cross for the first time, and your first sobbing as a child rose up before the Face of the Father. Thus Your redemptive passion began."Â

MANGER AND CROSS
On a stone drawing by Wilhelm Geyer of the stable of Bethlehem only a part of the tim-berwork remains. It stands above the Child and his Mother raised up like a threatening Cross. The longer one looks at this picture, the more the Child and his Mother withdraw into the background. Surely the two persons constitute the center of the picture. But ever stronger the gallows-like beams protrude and determine the meaning of the image of the birth of CHRIST that the artist wants to give.
And from the artist Beate Heinen a picture originates with the title "Manger and Cross". In the foreground one sees a rock cave with the newborn Child Jesus - not in a kind of manger, but in a kind of trough looking like a coffin. From the manger a way starts through a blooming garden. Along the way the trees become more and more bare, the colors more gloomy.

At the rear edge of the image a hill with three crosses can be perceived. The way is winding upwards; it is steep. Nothing is growing there any more. There is no green, only grey. It is not a place of life, but of death. We know the name of the hill: Golgotha.

The way is leading from the Manger to the Cross.

Jesus had to go this way. It was the way of his life. The painter showed it with her picture quite clearly: the Manger and the Cross belong together. It is not possible to accept only a part of the life of Jesus - for everything is connected, everything is woven together.Â

Perhaps we think: It's Christmastime; our hearts should be focused on the joy of His birth. Certainly! But are we missing something then?

Not only modern artists emphasize the connection between the Manger and the Cross. In a cloister of a convent of South Tyrol is a well-known picture: God the Father is sending his Son to the earth in order to become man in Mary; Jesus, however, shown as a little child, already carries the Cross. The artists indeed call our attention to something unusual in the story of Christmas. They call our attention to the ultimate consequence which is connected with the Incarnation of Jesus Christ: his death on the Cross of Golgo-tha.

THE ULTIMATE CONSEQUENCE OF THE INCARNATION OF GOD
The saints as well realized this connection.

Thus we read in the retreat booklet by St. Ignatius: "We should in and by the Christmas narration "look and ponder what Mary and Joseph are doing: they are on a journey; they are laboring, that the Lord can be born in the greatest poverty, in order finally, after so much effort, hunger and thirst, heat and cold, insults and offences, to die on the Cross - and all this for me."Â Â

The Gospels as well indicate that the Cross above the Manger is more than a mere decoration. Herod seeks to take the life of the newborn Child Jesus. Death is indeed present as a menacing possibility. We are used to seeing only splendor and glory around the newborn Jesus. But the artists, the saints, and even more the Evangelists, know better:

The birth and death of Jesus Christ, the Manger and the Cross, belong togetherÂ indissolubly. God became man in order to die for us as man. God was born inÂ Bethlehem in order to be able to lay down his life on Golgotha out of love for men!

In a Way of the Cross of the Advent season it says in the 1st station: "Get down on your knees, O soul, close your eyes and look within: Jesus is condemned to death: There lies the newborn Infant, subject to all the laws of nature: ...coldness, hunger, nakedness and poverty await Him. Jesus' first hour in the stable of Bethlehem is already a redemptive act - expiation, salvation, and satisfaction. Â We adore You, O Jesus, and we praise You, for by Your holy Cross, already from that first hour of Your life, and by Your Passion and Death, You have redeemed the whole world."
The founder of St. John's Community, Fr. Marie-Dominique Philippe, once said: "The Advent season is totally orientated towards Christmas, and Christmas is orien-tated towards the Cross. Jesus came to this world in order to save us. Mary became Mother that we should be able to live from the salvation which Jesus wants to give us."Â

Fr. Bernhard Speringer ORC is a priest of the "Order of Canons Regular of the Holy Cross" (http://www.cruzios.org) in Austria. He was ordained 2001 in Innsbruck. His main task is leading spiritual exercises in Austria, Switzerland, Germany and Italy, especially for members of the "Opus Sanctorum Angelorum" (www.opusangelorum.org). He is Editor-in-Chief of "St. Josephsblatt" and known for his contributions and publications in various Catholic media, including conferences on Radio Maria.