The importance of Sisters in schools

In Lincoln, Nebraska, you can tell the seasons by the habits of the School Sisters of Christ the King. 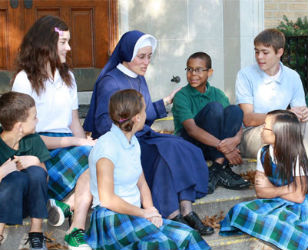 When a CK sister is donning her dark blue habit, that means the months are turning colder

Denver, Colo. (CNA/EWTN News) - It's not really summer until you spot a "CK Sister", as they are affectionately known, walking around in her lighter blue summer habit.

But when a CK sister is donning her dark blue habit, that means the months are turning colder. And when the dark blue habits come out, you can find almost every CK sister in a classroom, teaching in one of the 27 Catholic elementary schools in the diocese.

Religious school sisters are a fairly common sight in the Diocese of Lincoln, which has two diocesan orders of women religious - the Christ the King Sisters as well as the grey-habited Marian sisters, many of whom can also be found teaching in the local Catholic schools.

In much of the rest of the country, however, religious sisters are something of a rare novelty - though they used to be a much more common sight in the United States.

In 1965, there were nearly 180,000 women religious in the United States, many of them school teachers, according to data from the Center for Applied Research in the Apostolate out of Georgetown University.

By 2014, there were less than 50,000 religious sisters, the numbers having steadily declined over the past half-century in the post-Vatican II upheaval that was felt in many parts of the Church around the world.

It was in the midst of this upheaval and decline that Bishop Glennon Patrick Flavin, then of Lincoln, decided to found the Christ the King Sisters as a religious order dedicated specifically to teaching children.

"He noticed that there were a good number of sisters in our schools in the 50's and 60's, but by the 70's the sisters were starting to pull out of our classrooms," Sr. Mary Cecilia, a Christ the King Sister, told CNA.

Bishop Flavin had difficulty finding already-established religious orders that were able to come to the Diocese of Lincoln, and eventually felt called to found a diocesan order dedicated specifically to teaching, Sr. Mary Cecilia said.

"He knew that our seminaries were growing and increasing in number, and he thought if the Lord was calling this many young men to serve as priests then he was probably calling young women to serve as sisters also," she said.

Sr. Mary Cecilia, who now serves as principal of St. Joseph's Catholic School in Lincoln, said that Bishop Flavin founded the order with the idea that a good religious education would strengthen the faith of much of the laity in the diocese.

"He realized that one of the best ways to really nurture their faith in the lives of these children is through the consecrated life, through having sisters present in the schools, the value of the witness of a religious - their life totally dedicated to God, their gift of self-sacrifice, being a spiritual mother to every single student in the school," she added.

For herself, Sr. Mary Cecilia said she knew from a young age she wanted to teach.

"I have a brother who's a priest - he often talks about how I used to play school so everything he knows about teaching came from me when he was little," she joked.

In college in the early 1990s, she studied high school math education and dreamed of teaching calculus and algebra to older students. But that's also when she met the Christ the King Sisters, who only teach at the elementary level.

"I realized oh they're joyful, they're young, vibrant, I like that," Sr. Mary Cecilia said.

Even though she was drawn to religious life as a CK Sister, she was still hesitant about teaching at the younger level - "that was something that I had to take to the Lord," she said.

Ultimately, though, the spirit of the CK Sisters, their depth of prayer, their warmth, and their dedication to education were what drew Sr. Mary Cecilia to them.

Sr. Mary Agnes belongs to another religious order, the Sisters of the Immaculate Heart of Mary in Wichita, Kansas, that is also primarily dedicated to the education and formation of young people.

A veteran teacher of 10 years, Sr. Mary Agnes said she believes that religious sisters bring something unique to the classroom that other teachers cannot, even though at a basic level, they perform the same functions.

"Our vocation is to be a more radical, vivid sign of the presence of Christ in the world, and then hopefully through that witness draw people to an encounter with Christ," she told CNA.

"We do really similar things that other people do who are not sisters," she said. "So (the value of) religious life is not about doing, it's about witness and the being of the person. Our vocation is to be a more radical, vivid sign of the presence of Christ in the world, and then hopefully through that witness draw people to an encounter with Christ."

Both orders, primarily dedicated to education, have sisters teaching on Catholic campuses throughout the country.

"We belong to the Dominican Order and our charism is preaching and teaching.Women religious have been an integral part of the history of Catholic education in the United States," Sr. John Dominic with the Dominican Sisters of Mary Mother of the Eucharist told CNA.

"As Dominican Sisters of Mary, Mother of the Eucharist, we seek to continue the tradition of educating generations of young people in their faith and most of all, to bring youth into a deeper relationship with Christ," she said.

Despite the general decline in religious life that has been happening over the past few decades, both Dominican orders have seen a boom in young vocations in recent years. The Dominican Sisters of Mary recently opened a new priory in Texas in order to accommodate all of the young women discerning religious life in their order.

When asked what is drawing so many young women to their order, Sr. John Dominic responded: "The young people are responding to God's invitation to 'come and follow Him'."

Sr. John Dominic said the depth of the prayer life of the sisters and the close relationship with the Lord that their way of life allows lets them bring the fruits of their spiritual life to their students.

"Pope Saint John Paul II once described women religious as being a 'sign of tenderness' in the world. From my experience in working with Sisters in schools, this is precisely what many of them bring - tenderness and an intuitive heart," she said.

Sr. Mary Agnes said she is always humbled when parents and students recognize the unique gifts and witness that religious sisters bring to the classroom.

"...that to me is the most striking, when the students come back after they graduate and they're so excited to express: 'Thank you what you've done for me.' Many times they don't recognize it at the time but then they do say thank you I'm glad that you taught me, I'm glad you were there for me, and it's so humbling," she said.

Sr. Mary Cecilia said that she would encourage young women considering religious life not to be afraid, and to encounter sisters up-close before believing some of the misconceptions about religious sisters that exist.
"When I was younger I thought that all sisters instantly became like 70 once they put that habit on, and that's not true!" she said. "None of our sisters are 70 yet."

On a more serious note, she added, "I think one of the misconceptions out there is that you have to give up everything that you hold dear, that you have dreams of, in order to do this. And in reality you do but it's not the giving up that you focus on," she said.

"It's what takes its place - your relationship with the Lord, and being able to be filled with an intense and immense love for him, and therefore an immense love for the people you're asked to serve."