Pope Benedict the Evangelizer Calls Youth to Vocation and Mission. Next WYD in Brazil

Free World Class Education
FREE Catholic Classes
The New Evangelization Continues and Pope Benedict the Evangelizer is headed to the South America to proclaim the Gopsel in its fullness as found within the heart of the Catholic Church.

The days in Madrid were an opportunity for Benedict the Evangelizer to recruit new apostles for a new missionary age of the Catholic Church. The fruit which will be borne from his apostolic work will result in the re-Christianizing of Europe. He announced in this homily that the next World Youth Day will take place in Brazil. 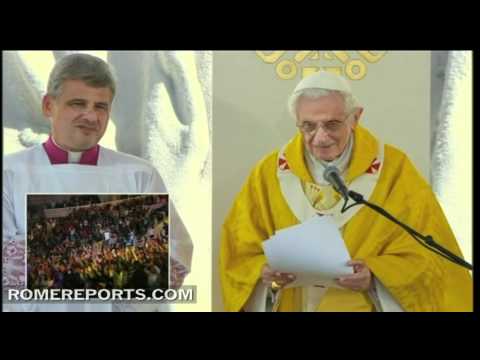 P>MADRID, Spain (Catholic Online) - With gratitidue to Vatican Radio-  and many other sources - we are happy to present to our global readers Pope Benedict XVI's Vigil Homily at the Cuatro Vientos Airbase in Madrid, Spain. Clearly, Pope Benedict XVI is another Evangelist pope, much like his predecessor, Blessed John Paul II, even though their manner of delivery and demeanor are quite different.

The crowds in Madrid for this World Youth Day were the largest of the six years of Pope Benedict XVI's service to the Church and the world into which she is sent to continue the redemptive mission of the Lord. Estimates indicate that the turnout in Madrid exceeded the combined total of both Sydney and Cologne.

On Saturday, May 14, 2011 when addressing the directors of the Pontifical Mission Societies, Benedict called them to infuse all of their activity with a vibrant new missionary spirit. He reminded them that our age is marked by new forms of slavery and injustice and that the mandate and mission of the Church is to evangelize - even in the face of persecution. He proclaimed, "All the sectors of pastoral life, of catechesis and of charity should be characterized by the missionary dimension: The Church is mission".

The Pope reminded them that evangelization requires a living faith which plants within a person the desire to share that faith with others. This leads to a a desire to "transform the world according to God's plan". The fruit of evangelization is to lead modern men and women out of all the modern forms of slavery and into the "real freedom" which comes through Jesus Christ and membership in His Church.

Pope Benedict XVI often notes what is obvious to any honest observer, many cultures formerly infused with a Christian culture are now "post-Christian" and need to be "re- evangelized." This is the mission of the "New Evangelization." The "New Evangelization" calls all members of the Church to live out our baptismal vocation through lives of sacrificial service at the heart of the Church, for the sake of the world.

The Pope said "the faith cannot endure by itself in the world; it is not automatically transmitted to men's hearts but always has to be announced. And the announcement of the faith, in order to be effective, must come from a heart that believes, that hopes, that loves, a heart that adores Christ and believes in the power of the Holy Spirit. ... The response of faith arises when, by God's grace, man discovers that believing means finding true life, the 'full life'".

He then underscored the urgency of evangelization saying, "the Church, each one of us, must bring the world the good news that Jesus is Lord, the One in Whom God's closeness and love for each man and woman became flesh. This announcement must resound anew in regions of ancient Christian tradition". He recalled words he had pronounced at World Youth Day 2005 in Cologne, Germany: "The happiness you seek, the happiness you have the right to enjoy, has a name and a face: Jesus of Nazareth, concealed in the Eucharist.

"If mankind forgets God", he added, "this is also because Jesus is often reduced to the status of a wise man, and His divinity is diminished if not denied outright. This way of thinking makes it impossible to comprehend the radical novelty of Christianity, because if Jesus is not the only Son of the Father, then God did not enter into the history of mankind. The truth is that the incarnation is at the very heart of the Gospel. May we, then, show increasing commitment to renewing evangelisation, which is a task not just for the few but for all the members of the Church".

"Should we too not share the beauty and reason of the faith, and carry the light of God to the men and women of our time with courage, conviction and joy?" Pope Benedict asked. "Many are the people who have not yet met the Lord; they must be given our special pastoral attention. ... Today this is more urgent than ever and requires us to commit ourselves trustingly, upheld by the certainty that the grace of God always works on the heart of man".

Clearly, these days in Madrid have been an opportunity for Benedict the Evangelizer to recruit new apostles for a new missionary age of the Catholic Church. The fruit which will be borne from his apostolic work will result in the re-Christianizing of Europe. He announced in this homily that the next World Youth Day will take place in Brazil. The New Evangelization Continues and Pope Benedict the Evangelizer is headed to the South America to proclaim the Gopsel in its fullness as found within the heart of the Catholic Church.

I greet all of you, especially the young people who have asked me their questions, and I thank them for the sincerity with which they set forth their concerns, that express the longing which all of you have to achieve something great in life, something which can bring you fulfilment and happiness.

How can a young person be true to the faith and yet continue to aspire to high ideals in today's society? In the Gospel we have just heard, Jesus gives us an answer to this urgent question: "As the Father has loved me, so I have loved you; abide in my love" (Jn 15:9).

Yes, dear friends, God loves us. This is the great truth of our life; it is what makes everything else meaningful. We are not the product of blind chance or absurdity; instead our life originates as part of a loving plan of God. To abide in his love, then, means living a life rooted in faith, since faith is more than the mere acceptance of certain abstract truths: it is an intimate relationship with Christ, who enables us to open our hearts to this mystery of love and to live as men and women conscious of being loved by God.

If you abide in the love of Christ, rooted in the faith, you will encounter, even amid setbacks and suffering, the source of true happiness and joy. Faith does not run counter to your highest ideals; on the contrary, it elevates and perfects those ideals. Dear young people, do not be satisfied with anything less than Truth and Love, do not be content with anything less than Christ.

Nowadays, although the dominant culture of relativism all around us has given up on the search for truth, even if it is the highest aspiration of the human spirit, we need to speak with courage and humility of the universal significance of Christ as the Saviour of humanity and the source of hope for our lives.

He, who took upon himself our afflictions, is well acquainted with the mystery of human suffering and manifests his loving presence in those who suffer. They in their turn, united to the passion of Christ, share closely in his work of redemption. Furthermore, our disinterested attention towards the sick and the forgotten will always be a humble and warm testimony of God's compassionate regard.

Dear friends, may no adversity paralyze you. Be afraid neither of the world, nor of the future, nor of your weakness. The Lord has allowed you to live in this moment of history so that, by your faith, his name will continue to resound throughout the world.

During this prayer vigil, I urge you to ask God to help you find your vocation in society and in the Church, and to persevere in that vocation with joy and fidelity. It is a good thing to open our hearts to Christ's call and to follow with courage and generosity the path he maps out for us.

The Lord calls many people to marriage, in which a man and a woman, in becoming one flesh (cf. Gen 2:24), find fulfilment in a profound life of communion. It is a prospect that is both bright and demanding. It is a project for true love which is daily renewed and deepened by sharing joys and sorrows, one marked by complete self-giving. For this reason, to acknowledge the beauty and goodness of marriage is to realize that only a setting of fidelity and indissolubility, along with openness to God's gift of life, is adequate to the grandeur and dignity of marital love.

Christ calls others to follow him more closely in the priesthood or in consecrated life. It is hard to put into words the happiness you feel when you know that Jesus seeks you, trusts in you, and with his unmistakable voice also says to you: "Follow me!" (cf. Mk 2:14).

Dear young people, if you wish to discover and to live faithfully the form of life to which the Lord is calling each of you, you must remain in his love as his friends. And how do we preserve friendship except through frequent contact, conversation, being together in good times and bad? Saint Teresa of Jesus used to say that prayer is just such "friendly contact, often spending time alone with the one who we know loves us" (cf. Autobiography, 8).

And so I now ask you to "abide" in the adoration of Christ, truly present in the Eucharist. I ask you to enter into conversation with him, to bring before him your questions and to listen to his voice. Dear friends, I pray for you with all my heart. And I ask you to pray for me. Tonight let us ask the Lord to grant that, attracted by the beauty of his love, we may always live faithfully as his disciples. Amen.