A Missionary Pope, the New Evangelization Council and the Ecclesial Movements

Free World Class Education
FREE Catholic Classes
All the sectors of pastoral life, of catechesis and of charity should be characterized by the missionary dimension: The Church is mission

Pope Benedict XVI  notes what is obvious to any honest observer, many cultures formerly infused with a Christian culture are now "post-Christian" and need to be "re- evangelized." This is the "New Evangelization." We are called to live out our baptismal vocation through lives of sacrificial service at the heart of the Church for the sake of the world. 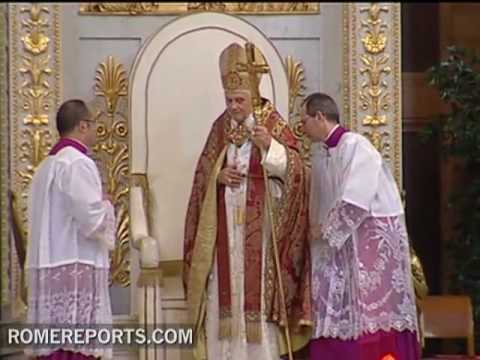 Many Catholics do not know what the Catholic Church actually teaches. Some have embraced what is often called a "cafeteria Catholicism"- choosing what parts of the faith they will follow. Others profess the Creed but confine its influence only to participation in the Liturgy on Sunday. This leads to what was warned of by the fathers of the Second Vatican Council as the "greatest error of our age, the separation between faith and life."

The result of the rejection of the existence of objective truth has given birth to what was referred to by Pope Benedict XVI in his first homily as a "Dictatorship of Relativism".  The contemporary culture has thrown off almost every remnant of Christian influence. It has embraced a "new" paganism; which is just the old paganism dressed up in the sophistry of an age that purports to be "enlightened" when it is desperately lost.

The embrace of license over liberty, death over life and the abuse of the goods of the earth over responsible stewardship, are all fueled by a counterfeit notion of freedom as a raw power over others and the delusion that "freedom" implies some feigned "right" to choose even what is wrong. The United States (which consistently polls as one of the most "religious" of the Nations of the West) demonstrates little evidence of the influence of the Christian faith in its daily life.  The principles derived from any past influence of that faith are no longer respected in its increasingly coarsened culture of death and materialism.

"Religion" is acceptable in some of the new pagan nations as long as it is kept "private". Yet, of all religions, Christianity can never be "kept private". The Incarnation of God in Jesus Christ is profoundly public. Christian faith may be personal but evangelization and mission are at its core. Since the Second Vatican Council in the Catholic Church the consistent teaching concerning the importance of missionary activity has been that the Church is by nature missionary and that every baptized Christian participates in her missionary activity.

On Saturday, May 14, 2011 the Pope spoke to the directors of the Pontifical Mission Societies. He called them to infuse all of their activity with a vibrant new missionary spirit. He reminded them that our age is marked by new forms of slavery and injustice and that the mandate and mission of the Church is to evangelize - even in the face of persecution. He proclaimed, "All the sectors of pastoral life, of catechesis and of charity should be characterized by the missionary dimension: The Church is mission".

The Pope reminded them - and all of us - that evangelization requires a living faith which plants within a person the desire to share that faith with others. This leads to a a desire to "transform the world according to God's plan". The fruit of evangelization is to lead modern men and women out of all the modern forms of slavery and into the "real freedom" which comes through jesus Christ and membership in His Church.

Pope Benedict XVI  often notes what is obvious to any honest observer, many cultures formerly infused with a Christian culture are now "post-Christian" and need to be "re- evangelized." This is the mission of the "New Evangelization." The "New Evangelization" calls all members of the Church to live out our baptismal vocation through lives of sacrificial service at the heart of the Church, for the sake of the world. Since the Second Vatican Council in the Catholic Church the emphasis has been upon the fact that the Church is by nature missionary and that every baptized Christian participates in her missionary activity.

Msgr. Fernando Ocariz, vicar general of Opus Dei; Fr. Pascual Chavez Villanueva, rector major of the Salesian Society of St. John Bosco and president of the Union of Superiors General; Fr. Julian Carron, president of the Fraternity of Communion and Liberation and ecclesiastical assistant to the Association "Memores Domini"; Fr. Francois-Xavier Dumortier, S.J., rector of the Pontifical Gregorian University in Rome; Fr. Pierangelo Sequeri, vice rector and professor of Fundamental Theology at the Theological Faculty of Northern Italy and lecturer in Aesthetics of the Holy at the Academy of Fine Arts in  Brera, Milan;

Sr. Sara Butler, M.S.B.T., professor of dogmatic theology at St. Joseph's Seminary in New York; Sr. Mary Lou Wirtz, F.C.J.M., general superior of the Daughters of the Sacred Hearts of Jesus and Mary and president of the Union of Superior Generals (UISG); Dr. Chiara Amirante, founder and president of the New Horizons Association of the diocese of Anagni-Alatri, Italy; Mr. Kiko Arguello, a co-initiator of the Neo-Catechumenal Way; Prof. Lucetta Scaraffia, professor of contemporary history in the Faculty of Letters and Philosophy at "La Sapienza" University in Rome.

We note the presence of several leaders of ecclesial movements such as the Fraternity of Communion and Liberation and the Neo-Catechumenical Way along with the vicar general of the prelature of Opus Dei. The Pope has emphasized these Ecclesial Movements as a resource for the New Evangelization. As a Cardinal, he wrote extensively about these movements and advocated for their place in the heart of the Church.

We often feature the ecclesial movements on Catholic Online. We will continue to do so as we progress toward the feast of Pentecost. They are a work of the Holy Spirit for our time. The Pope recounted his first encounters with the ecclesial movements in these words " ...at a moment of weariness in the Church, at a time when we were hearing about "the winter of the Church", the Holy Spirit was creating a new springtime."

Let us pray for and join with our Missionary Pope and the New Evangelization Council. As fellow workers in the vineyard, let's get to work.