Lenten Recipes and the Whys of 'Fish Eaters'

Where does this traditional Catholic practice originate?

The fish was one of the most important Christian symbols of the early Church. In a political and religious climate often fatal to them, the fish was a secret symbol used to identify Christians. 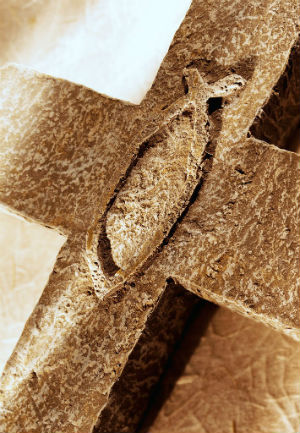 The fish enjoys Scriptural prominence too. Several apostles were fishermen, called to be 'fishers of men'.

BETHPAGE, TN (Catholic Online) - As a Catholic I am often asked by non-Catholics why we eat fish on Fridays during Lent. Until I was Catholic, it never occurred to me that the Filet-O-Fish' sandwich is not an ordinary staple at McDonald's except in the spring, or that the sudden flurry of Red Lobster commercials just before Easter was similarly calculated. Where does this traditional Catholic practice originate?

The fish was one of the most important Christian symbols of the early Church. In a political and religious climate often fatal to them, the fish was a secret symbol used to identify Christian brothers and to mark Christian meeting places and tombs.

Ichthys is Greek for fish.  Its letters, dissembled, correspond to the first letters of each of the words in the ancient Christian phrase, "Jesus Christ, God's Son, Savior." It was an acrostic in ancient Greek that helped the early Christians survive martyrdom and that often appears in first century catacombs in Rome.

The fish enjoys Scriptural prominence too. Several apostles were fishermen, called to be "fishers of men"; Jonah was swallowed by a fish and became symbolic of the resurrected Christ; Peter found coin for the temple tax in a fish's mouth at Jesus' command; it was said the Judgment will be like sorting one's catch for the day. In the miracle of the loaves and fishes, the fish was symbolic of the Eucharist, so that "fish eaters" were ichthys eaters, or those who "ate Christ."

Because of early Christian use of its symbolism, the fish is strongly symbolic of Christ and the apostles, but second century Christians continued the practice and symbolism. Clement of Alexandria advised Christians to use a dove or fish symbol for their seal, and when writing on baptism, Tertullian said, "But we, being little fishes, as Jesus Christ is our great Fish, begin our life in the [baptismal] water, and only while we abide in the water are we safe and sound" (De Baptismate, i).

But "fish eating" was not to remain merely symbolic, although it would always be distinctly Catholic. At the time of Christ's Incarnation, in the first century, Jews were accustomed to fasting as a spiritual discipline; they fasted or abstained on Mondays and Thursdays. The early Christians, to show participation in Christ's suffering and unity with Him, moved the fast days to Wednesdays and Fridays, because Judas betrayed Jesus on a Wednesday and Jesus was crucified on a Friday.

Thereafter, Wednesday and Friday fasts were a universal Catholic custom, one which Eastern Catholics and Orthodox continue to observe. It evolved over the centuries into the practice of "No Meat Fridays" in which, as a spiritual discipline, Catholics did not do without food altogether, they just gave up meat.

In the Palestinian area where Jesus and the apostles lived, and from that time period until recent history, fish was the easiest to come by. Other "meat" was a luxury for which only the rich had the means: the money required to buy meat or land on which to raise herds. Fish, however, was a common staple, as easy as a stream and a line, and so it became symbolic of humility and poverty.

Later, the term "fish eaters" became an insult, because one of the main cultural practices that set early Protestant American settlers apart from Catholics was their Friday fast. First lobbed at Catholics by Dutch Protestants (to which Catholics retaliated with "cheese-eater") it remains an anti-Catholic slur in some circles to this day.

Although they continue in the East, weekly fasts have died out in the west for several reasons. Westerners are more hedonistic and often simply do not care that they are ruled by their flesh to the destruction of their spirits. Most of us consider our recreation and luxuries as necessities.

Also, the regulations for fasting are set by the bishops and vary by location. Dinner at Red Lobster or even Captain D's hardly lives up to the ascetic spirit of a fast. For these reasons many western bishops relaxed the fasts because the ascetic spirit remained unobserved.

But Lenten fasting and abstinence remains even where Friday and/or Wednesday fasting has been abandoned. There are traditionally forty days in Lent which are marked by fasting. The idea was, and still is, to do without the luxuries in life, both foods and festivities, and to engage in acts of penance. Traditionally, those penances are prayer (justice to God), fasting (justice to one's self), and almsgiving (justice to one's neighbor).

One who gains mastery over his appetites, gains mastery over his flesh. The struggle against disordered appetites and passions of the flesh should anchor one in prayer, and is a prerequisite for spiritual progress, because fleshly appetites and passions are "enmity against God: for [they are] not subject to the law of God, neither indeed can be" (Rom. 8:7).

It is Catholic practice, then, to eat fish during Lent, a food which is not considered meat (even by Jews or Muslims) and is symbolic of penance, humility and spiritual poverty. In addition, because of early Christian use of its symbolism, the fish also bears strong symbolism of Christ and the apostles, and is therefore allowed during Lent despite its being, literally, the "flesh of an animal."

Until then, try these favorite fish recipes during your Lenten fast.

Cook pasta according to package directions. Meanwhile, saute garlic in olive oil for one minute (do not brown). Add wine and reduce by half. Add clams with reserved liquid, pepper flakes and parsley. Cook for 2-3 minutes or until reduced by half. Add cream and cheese and heat, stirring continually until melted and sauce is creamy.

Drain salmon, remove bones and flake. In large bowl, combine salmon with next 5 ingredients. Stir in eggs and bread crumbs to make a wet batter (add more bread crumbs if desired for firmer consistency). Shape salmon into small 1x2 balls and flatten into patties. In 2 batches, cook in hot oil on med-high heat for 2-3 minutes per side or until golden and crispy. (Crowded patties are soggy patties.) Drain on wire rack.

Heat flour on high and toast, stirring constantly so it doesn't burn. Transfer to small bowl and set aside. In olive oil, saute onions, celery and garlic until opaque. Add broth, sausage, tomatoes and herbs and bring to a boil. Add rice (cook time will vary according to the type of rice used. Consult package directions.) Add fish and shrimp and simmer till fish is flaky and shrimp is pink. Add hot sauce to taste.

A great variation outside of Lent is to add 1/2 package of Kielbasa sausage, sliced and halved, after adding the chicken broth. Delicious!