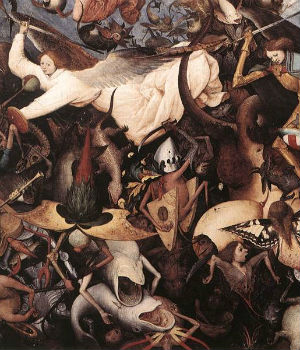 The terms "sin" and "vice," often used interchangeably, are not really identical. Sins are specific acts of commission or omission. Vices are character traits. Like virtue, vices are developed through habit and practice and produce a person's basic disposition.

WITCHITA, Kansas (Catholic Online) - Alexander Solzhenitsyn, Nobel prize winner and long-term prisoner of the Russian Gulag, said that "the battle line between good and evil runs through the heart of every man."

It's too easy to divide good and evil between we good guys and those bad guys, when, as Pogo once said, "We have met the enemy, and he is us." In the privacy of our own consciences, we admit that shadows lurk within our hearts, the concupiscence that makes sin appear to be an attractive choice. Our motives are always mixed. Like St. Paul, we lament, "I do not do the good I want, but I do the evil I do not want." (Romans 7:18)

The desert fathers meditated long and hard on the human condition. Pope St. Gregory the Great, building upon the work of Evagrius and St. John Cassian, devised the list of what we call today The Seven Deadly sins. Sin, however, is not quite the right term for these deadly traits in the depths of our souls.

The terms "sin" and "vice," often used interchangeably, are not really identical. Sins are specific acts of commission or omission. Vices are character traits. Like virtue, vices are developed through habit and practice and produce a person's basic disposition. (The Catechism Glossary and #1813, 1866, 1849, 1853, 1854 offer the proper definitions of virtue, vice and sin.)

All sin is less a violation of law than an attack on communion. It always involves two things: a violation or distortion of human nature and a betrayal of communion with God. A character rooted in vice, produces acts in accordance with that vice. Similarly a virtuous character produces good fruit (see Matthew 7:16-20).

These seven vices - or, as we know them, Seven Deadly Sins - are the fountainhead of many of the sins we commit in our lives. When not rooted out and replaced by virtue, they can indeed kill the soul. Upon death, a person's basic character is permanently set - either towards God or against Him.

Take the Lent quiz now!
During Lent, the Church invites us to engage in what is traditionally called "spiritual combat" against these deadly character traits wherever they have found safe harbor in our hearts. Not that we engage in this struggle alone. We depend on God's grace and mercy to aid us at every step.

This series will offer brief meditations on each of the seven deadly sins. Following Evagrius' lead, we begin with the grosser, more materialistic sins of lust and gluttony and move up to avarice, sloth, anger, envy and finally to the crowning and most spiritual sin of pride.

Jeri Holladay writes from Wichita, Kansas, where she has been Director of Adult Education at the Spiritual Life Center of the Diocese of Wichita, Associate Professor of Theology, Chairman of the Theology Department and founding Director of the Bishop Eugene Gerber Institute of Catholic Studies at Newman University. She teaches moral theology and church history and is a contributing writer for Catholic Online.