SUNDAY HOMILY: The Happy Priest - Why Does Jesus Cause Division?

To be Catholic means that we embrace the entire Catechism of the Catholic Church without tearing out the pages that we do not agree with. 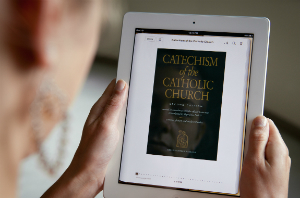 Why does Jesus cause division? The answer is clear. Only Jesus is the way, the truth and the life. Only in the name of Jesus can we find eternal salvation. We all have a choice to make. Either we follow Jesus or we simply wind up doing our own thing. The right choice will lead us to eternal life in heaven. The wrong choice will lead us to ruin and eternal condemnation.

CORPUS CHRIST, TX (Catholic Online) - Many years ago a young high school senior came to speak to me.  He was raised as an Evangelical Protestant and his girlfriend, a cradle Catholic, sparked his interest in Catholicism through the many conversations that they had had about religion.  He was doing a lot of reading, especially Dr. Scott Hahn's conversion story, and he was ready to begin formal instructions.  However, he faced a serious dilemma. He told me that his parents were anti-Catholic, and if in fact he did convert to Catholicism, it would cause division in his family.

As the young man spoke, I listened attentively, and then I opened up my Bible and read to him these words from the Gospel:

I do not know a single family that I have ministered to that does not have some kind of division going on in their immediate family, usually always dealing with some moral issue.  Not only are people divided, but priests too are extremely polarized over the most fundamental teachings of Catholicism.   As time goes on, my impression is that this tension is increasing rather than decreasing.

As I reflect upon the Scripture passages of this Sunday's liturgy, I cannot help but think about another part of the Sacred Scriptures:

"But understand this, that in the last days there will come times of stress.  For the time is coming when people will not endure sound teaching, but having itching ears they will accumulate for themselves teachers to suit their own likings, and will turn away from listening to the truth and wander into myths" (2 Timothy 3:1; 4: 3-4).

My observation is that the tension is always about the same topics: contraception, abortion, papal authority, confession, sin and the use of Latin in the liturgy are among the biggest topics.

To be Catholic means that we embrace the entire Catechism of the Catholic Church without tearing out the pages that we do not agree with.

Back in the 80's I spent a long period of time studying and doing apostolate in Spain.  At that time, the Catholicism of Spain was practically obliterated from the hearts and minds of the majority of the Spanish people.  There was a pervasive mentality in people and they would not even discuss the most fundamental questions of human existence.

I returned to the United States in the summer of 1988, just six months after my priestly ordination.  At some moment shortly thereafter, I was spending a few spare moments in a bookstore and came across a new book entitled The Closing of the American Mind by Allan Bloom.  My immediate reaction to the title was that such an assertion was not true; the American mind is not closed.  As I began my apostolate in the United States, I quickly found out that Bloom was correct.

What has caused this situation in America; a situation that has even entered into the Church?  There are two causes.  The first is rebellion.  The pervasive attitude among most people is this: "Don't tell me what to do."  The second cause is relativism.

So, as divisions increase and the polarization intensifies, what should be the attitude of faithful Catholics?  The answer is simple: be faithful.  This Sunday's second reading exhorts us to persevere.

"For the sake of the joy that lay before him he endured the cross, despising its shame, and has taken his seat at the right of the throne of God.  Consider how he endured such opposition from sinners, in order that you may not grow weary and lost heart.  In your struggle against sin you have not yet resisted to the point of shedding blood" (Hebrews 12: 3-4).

Why does Jesus cause division?  The answer is clear.

Father James Farfaglia is a contributing writer for Catholic Online.  Visit him on the web at www.fatherjames.org.